Donald Trump Is Ready to Shed the Syria Problem 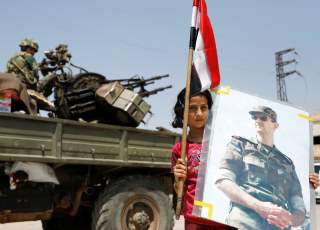 Speaking in Ohio in late March, President Donald Trump promised to pull U.S. troops out of Syria “very soon.” It took almost nine months but it appears he is belatedly fulfilling that pledge. Yesterday the president tweeted out that U.S. forces had defeated ISIS in Syria—“my only reason for being there during the Trump Presidency.” The roughly two thousand U.S. troops in Syria will be withdrawn over the next sixty to one hundred days. Reports claim that all State Department personnel will be out of the country within twenty-four hours. Following Vermont senator George Aiken’s famous advice to President Lyndon Johnson on Vietnam, it appears we will “declare victory and get out.”

This is a stunning reversal, particularly if one has made a habit of listening to the president’s emissaries and advisors. National Security Advisor John Bolton has maintained for months that U.S. forces would stay in Syria as long as any Iranian troops or Iranian proxies remained. James Jeffrey, the administration’s neoconservative Syria envoy, had openly talked of a no-fly zone recently. Defense Secretary James Mattis and the CENTCOM commander, Gen. Joseph Votel, have supported a longer term U.S. presence in Syria for months. Just a week ago, Brett McGurk, Special Presidential Envoy for the Global Coalition to Counter ISIS, told reporters that “it’s fair to say Americans will remain on the ground after the physical defeat of the caliphate.”

The largest U.S. installation in Syria also appeared to be built for the long haul: a mile long runway, great Wi-Fi, and both protein powder and souvenir T-shirts for sale.

President Trump, though, has rejected mission creep and an enduring U.S. military role in Syria. The issue has been decided on the battlefield, despite the lingering Idlib abscess. Bashar al-Assad’s Arab enemies have accepted that he won the Syrian civil war and that he is not going anywhere. They are fitfully welcoming him back into the fold. The Israelis have also signaled their acquiescence, despite their fears of the Iranian presence in Syria. President Trump appears ready to do the same. For the United States, recognizing reality almost anywhere in the Greater Middle East is progress.

We are also choosing the Turks over the Kurds. Trump’s decision followed a long Friday phone conversation with Turkish president Recep Tayyip Erdogan. The Turks are determined to check the Syrian Kurds of the YPG and are threatening a military offensive. For all of our problems with Erdogan’s authoritarian turn and his neo-Ottoman designs, the Turks are and always will be far more important than the Kurds to the United States.

We have again proved ourselves faithless friends to the Kurds, but they are no fools and have seen this movie before. They will probably reach a rapprochement with Assad soon and retain what autonomy they can, in return for some measure of Syrian and Russian protection against the Turks.

In choosing to pull American troops out of the Syrian morass, the president is rejecting the strategic advice of our most aggressive armchair attorney-at-arms and ignoring absurd plans for Gulf Cooperation Council protectorates in Syria. He is being predictably excoriated by the media—the same media that lauded his virtue signaling missile strikes in Syria last year as “presidential.” Denunciation from a Congress that has routinely refused to exercise its basic constitutional duties in foreign policy is equally risible.

At the risk of indulging in the besetting American sin of solipsism, there is also an important domestic component to the withdrawal. In defending his decision today, the president stressed that “I’ve been campaigning on it for years.” The extent to which Trump’s foreign policy apostasy helped him win election in 2016 is debatable, but there is evidence that U.S. combat casualties in Midwestern states were a key to Hillary Clinton’s loss. If Trump’s data analytics or his uncanny political instincts tell him that there is substantial support among the American people for foreign-policy restraint, then we may see more of it from his administration going forward.

Interventionists from both parties are warning that ISIS or its successor will return. They are probably right. At the Doha Forum last weekend, the Under-Secretary-General of the United Nations’ Counter-Terrorism Office, Vladimir Voronkov, stated that ISIS had about twenty thousand fighters left worldwide. The Islamic State has local ties in both Syria and Iraq and the financial network to endure. The predictable brutality of Iraq’s counter-insurgency campaign all but ensures lingering Sunni resentment and a cycle of revenge. We can’t lose the peace in Iraq and Syria because it is not ours to lose.

If and when that happens though, we can return to the military toolkit. It is high time we trade Colin Powell's “you break it, you buy it” for imperial Britain's “butcher and bolt.”

America does have some Islamic extremist enemies who are worth attacking in their sanctuaries. Despite nearly thirty years of post–Cold War sophistry and silliness, that is what our military is for: killing people and breaking things.

When we do destroy jihadist bases, we should leave the rubble as a reminder, not as a justification for fruitless reconstruction and further war. It is cheaper, and far smarter, to pursue a strategy of repeated punitive raids than one of fruitless forever war for democracy promotion and “addressing root causes.” The president’s Syria decision—assuming he sticks to it—may herald a new approach.

Gil Barndollar is the director of Middle East Studies at the Center for the National Interest and Military Fellow-in-Residence at the Catholic University of America’s Center for the Study of Statesmanship. A former Marine infantry officer, he has deployed twice to Afghanistan and to the Republic of Georgia, Guantanamo Bay and the Persian Gulf.