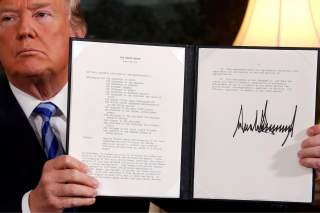 On November 4, Iran took its latest step away from the Joint Comprehensive Plan of Action, the 2015 multilateral deal that provided Iran with sanctions relief in exchange for verifiable limits on its nuclear work. During a press conference, the head of the Atomic Organization of Iran, Ali Akbar Salehi, announced Tehran was now officially operating its most advanced centrifuges at the Natanz enrichment facility. By the International Atomic Energy Agency’s own assessment, Tehran is now in the process of enriching uranium at Fordow, an underground nuclear site previously confined to research under the deal. Hours later, the U.S. Treasury Department issued a press release rolling out yet another round of economic sanctions against Supreme Leader Ayatollah Ali Khamenei’s inner circle—including Khamenei’s own son, Mojtaba, for operating an illicit funding stream on behalf of the Iranian regime.

This latest development is a fitting representation of the year and a half, where the United States and Iran—-adversaries for the past four decades—have been trapped in a familiar standoff that never seems to end. Actions taken by one have produced reactions by the other in a game of tit-for-tat that almost prompted a shooting war last summer. And as more time goes by, the staring-contest has only gotten more intense.

President Donald Trump needs to see the big picture before the indemnity leads to a cataclysm. The maximum pressure strategy his national security advisers have sold him on continued to create far more problems for the United States than they are worth.

At its core, maximum pressure is based on a simple premise: the tighter Iran feels the pinch, the more financially vulnerable the country will be and the more interested its political leadership will be to renegotiate the original nuclear deal. Officials from former National Security Adviser John Bolton and Secretary of State Mike Pompeo remain utterly convinced that it is only a matter of time before Tehran chooses to surrender in order for an end to the economic pressure.

And yet the evidence over the past sixteen months has been exactly the opposite. Far from waving the white flag in desperation, Iran’s leaders are doubling down on resistance.

Iran’s economy is certainly struggling. Washington’s decision to reimpose the sanctions lifted under the nuclear deal have placed a severe dent in Tehran’s accounts. In its latest economic update, the World Bank last month estimated that Iran’s economy is projected to contract 8.7 percent in the 2019–2020 time period due to lackluster foreign investment and a significant deterioration in oil exports. Consumer price inflation reached 52 percent in May, causing food prices to increase, which in turn negatively impacts the poorest Iranians. The International Monetary Fund has painted the same economic picture; this year could be the worst Iran has experienced since 1984, when the young regime was in the middle of an existential struggle against Saddam Hussein’s Iraq.

U.S. sanctions remain a growing problem for Iran’s oil industry, forcing other entities like the China National Petroleum Corporation to pull its participation from the South Pars natural gas development project. Crude oil exports have plummeted by 80 percent since Washington walked away from the nuclear deal. In April 2018, Tehran was sending 2.5 million barrels per day to foreign consumers, a figure that decreased to a measly 160,000 barrels per day in August.

There is no evidence, however, that any of this financial stress is forcing Iran to change its regional behavior. If there has been a change, then it has gone in the opposite direction proponents of the maximum pressure campaign predicted with such confidence. Iran is meeting economic pressure with military and nuclear pressure of its own, seizing oil tankers in the Persian Gulf and allegedly firing cruise missiles at Saudi Arabia’s largest refineries. U.S. surveillance drones have been shot down by Iranian missile defenses. Civilian ships have been sabotaged. And in an act of extreme irony, Iran’s nuclear activity has expanded. Whereas Tehran was producing one pound of low-enriched uranium a day before maximum pressure began, it is now producing eleven pounds per day. With more advanced centrifuges being installed, the quantity and quality of the enriched uranium Iran churns out will inevitably increase.

In short, maximum pressure strategy has only made Washington’s Iran objectives harder to accomplish. You can draw a straight line between today’s tenuous situation and the White House decision to enact stiff sanctions more than a year ago.

Fortunately, Trump still has an opportunity to prevent a further degradation in the relationship, one which could result in miscalculation neither Washington or Tehran want. But it will require the president to stop listening to poor counsel from the very people who dug U.S. policy into such a deep hole.

First, Trump needs to recognize that Iran will not capitulate to U.S. demands. Were Iranian leaders to succumb to maximum pressure, they would leave Tehran extremely exposed to similar tactics in the future and reaffirm the belief in the minds of U.S. policymakers that an all-pressure, no-negotiation strategy works. Tehran will not take this risk.

Second, the president should stop outsourcing Iran policy to Pompeo, whose advice and assumptions about Iran have proven to be consistently off-the-mark ever since he moved over to the State Department. Continuing to allow policy to be managed by the very people who have made the resumption of diplomacy so difficult is as unproductive as it is dangerous. If Trump genuinely wishes to strike a deal, then he needs to take back control of the policy and hand it over to advisers who have more credibility with the Iranians.

Finally, Trump ought to embrace his instincts and start empowering his diplomats to make a deal. The proposal authored by French president Emmanuel Macron, where Washington would reissue oil export waivers in exchange for Tehran reentering the nuclear deal in full, would stabilize the situation, and perhaps pave the way for discussions about a more comprehensive agreement on regional behavior and ballistic missiles. Macron’s initiative may have failed to gain traction during last September’s UN General Assembly meeting, but it elicited enough interest from Trump and Iranian president Hassan Rouhani to suggest that another bite at the apple could work.

What the United States can’t do is continue the status quo. Maximum pressure is a bankrupt strategy. To avert the possibility of a dangerous escalation, Washington must ditch a failed approach for good old-fashioned pragmatism.