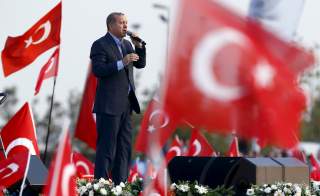 In the first half, which lasted eight years and four months, he was brilliant. He oversaw unprecedented economic growth and regional influence. He tackled long-festering problems, such as the Kurdish issue, while discreetly handling his military overlords. His string of successes culminated in July 2011 with an assertion of control of the military, an accomplishment that eluded all of his predecessors.

The eight years and four months since that turning point have seen that earlier brilliance vaporize. It has been replaced by inconstancy, self-indulgence, and unpredictability. Count the ways:

To begin with, democratic legitimacy curdled into dictatorship. Erdoğan appeared on the national scene as an honest, conservative, pious figure who precisely fit Turkey’s mood. On its initial appearance in 2002, his rookie Justice and Development Party (Adalet ve Kalkınma Partisi, AKP) won an impressive 34 percent of the vote (and an astonishing 66 percent of the seats in parliament). An impressive economic and political record enlarged the AKP’s vote to 46 percent in 2007 and 50 percent in 2011. After that, as Erdoğan’s popularity waned, he relied instead on an array of electoral abuses, from dominating media coverage, to having goons attack rival parties’ offices, to outright ballot shenanigans.

Erdoğan’s astute leadership early on attracted a quite diverse group of leaders, such as the country’s most powerful Islamist figure, Fethullah Gülen, and its leading Islamist politician, Abdullah Gül. It also attracted skilled technical figures such as the economic sage Ali Babacan and the foreign policy guru Ahmet Davutoğlu. Today, these four are all Erdoğan’s foes, justifiably opposing him for his excesses.

Erdoğan’s first era saw impressive economic growth featuring bountiful foreign direct investment as well as Turkish exports, engineering, and entrepreneurship. Symbolic of this achievement, the government transformed Turkish Airlines from a minor, poorly run national carrier into a prize-winning global behemoth boasting the most scheduled destinations (315) and the most countries (126) of any airline. But those glory years are now a receding memory, mostly due to Erdoğan’s own shortcomings: his kleptocratic ways, his nepotism (a son-in-law serves as minister of finance), and idiosyncratic views. In particular, he insists, against all evidence, that high-interest rates lead to high inflation. Symptomatic of these errors, the Turkish lira lost almost three-quarters of its value, sliding from .61 cents in July 2011 to .17 cents today.

A mania for public works created a uselessly mammoth Istanbul airport, the country’s largest mosque, and much else. There is even talk of a canal across the Bosporus. Erdoğan’s grandiosity also takes the form of personal facilities such as a Boeing 747-8 aircraft valued at $500 million and the world’s largest palace, a 1,150-room monstrosity illegally built in protected forest land. Beyond creature comforts, the possibility exists that this megalomaniac will declare himself caliph of all Muslims, perhaps on the centenary of the abolition of the Istanbul-based caliphate, either on March 10, 2021 (by the Islamic calendar), or March 4, 2024 (by the Christian one).

In foreign policy, a once-impressive “zero problems with the neighbors” regional approach has degraded into a dismal “nothing but problems with neighbors” reality. Syria offers the most dramatic shift: before July 2011, relations between Ankara and Damascus reached unprecedented highs, with augmented travel and trade, coordinated diplomacy, and something perhaps unique: the two leaders and their wives jointly vacationing together. The halfway mark of Erdoğan’s tenure then saw relations deteriorate, leading to Turkey’s sponsorship of ISIS, its shutting off 40 percent of the water flowing into Syria, and finally an invasion of the country’s northeast. Beyond Damascus, relations are toxic with Baghdad, Abu Dhabi, Riyadh, Jerusalem, and Cairo. Tiny Qatar stands out as Ankara’s only state ally.

Looking beyond the region, Erdoğan after 2011 took flamboyant steps that alienated the big powers. His thugs beat up protestors on the streets of Washington, DC and his air force shot down a Russian fighter jet. His motormouth accused Angela Merkel of “Nazi measures” and provocatively condemned China's treatment of its Turkish Muslim Uyghur population. Erdoğan eventually took steps to mollify each of these governments, improving relations without undoing the earlier damage.

Whither Turkey? Storms loom, with two dangers standing out: the economy and foreign policy. Economic laws bend for no man, not even for Sultan Erdoğan. Should he persist, as seems likely, in his nonsensical theory about interest rates, plus continue to alienate Western economic powers, he will either lead Turkey to disaster or to Chinese overlordship.

Foreign policy poses the other great danger. Abducting dissident Turkish citizens, drilling in Cyprus’s exclusive economic zone, and invading a neighbor point to an arrogance that, given Erdoğan’s isolated position, leaves him highly exposed. Some foreign misadventure—perhaps the Syrian one—could lead to his political demise as well as that of the AKP.

American leaders have been basically clueless about Recep Tayyip Erdoğan. George W. Bush facilitated his becoming prime minister. Barack Obama proudly called him a friend. Donald Trump invited the invasion of Syria. The Department of Defense deludes itself into thinking the NATO ally of old one day will return. The State Department relies on its traditional instinct to appease.

The time has come not just to perceive Erdoğan as an enemy but to anticipate the threat he presents to his country, his region, and beyond. This means withdrawing Turkey from the outdated “NATO ally” category and seeing it in the same league as Iran: partner of America’s enemies, ideological aggressor, sponsor of jihadi violence, and nuclear-weapons aspirant. Only this way can one prepare for the troubles ahead.