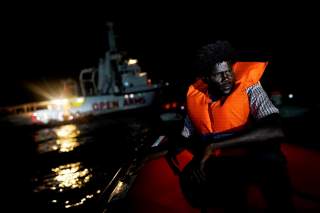 While the international press descended on the annual Davos festivities in January, it risked missing a story that illuminated the dynamics affecting Europe’s future far more than anything said at a Swiss ski resort. The European Union (EU) has faced external threats from instability along its borders and its adventurous neighbors but ultimately its greatest challenge comes from within.

German Chancellor Angela Merkel hosted a conference in Berlin last month in an attempt to resolve the long-running conflict in Libya. Although the attendees made paper promises to honor the UN arms embargo, which has been widely ignored for years, the warring Libyan parties reached no ceasefire or broader agreement. The statement released after the conference rightly argued that “[o]nly a Libyan-led and Libyan owned political process can end the conflict and bring lasting peace,” but that kind of process seems unlikely to occur. “The difference between the parties are such a magnitude” Merkel said, “that they don’t speak to each other.”

The immediate problem for Europe is that this conflict has far-reaching implications. It is not just that terrorist groups take advantage of the chaos; the breakdown of order gives human traffickers free rein to exploit the hundreds of thousands of people trying to cross the Mediterranean into the EU. The slavery-like conditions many of these people suffer are ghastly, as the State Department’s annual report attests.

As migrants successfully reach Europe, the backlash from their arrival is destabilizing European politics, and the EU lacks the ability to solve this problem without Libyan help. Since 2015, nearly half a million people made it to Italy, and the perceived inability of establishment parties to stop this inflow contributed to the Italian populists’ rise to power. The ousted government actually enacted many of the policies that have dramatically slowed the influx but they depend on Libyans stopping the smugglers in Africa. An escalating civil war in Libya threatens to undo that strategy. If their local partners falter, then the Europeans lack the coast guard and naval assets needed to police the Mediterranean well enough to stop another wave.

This would be challenging enough if the Europeans were the only outside powers entangled in Libya but they are not. Other countries have been involved for years, but the tide of the war shifted recently when Russian mercenaries arrived to support warlord Khalifa Hifter, forcing Turkey to deploy military advisers and Syrian proxies to shore up the UN-recognized Government of National Accord.

It is not clear which victor would be less disastrous for Europe’s interests. A Hifter victory would give Vladimir Putin even better access to the Mediterranean than his Syrian bases offer, allowing him to threaten NATO’s southern flank in any standoff. On the other hand, last year Recep Tayyip Erdogan threatened to retaliate against European criticism of his actions in Syria by sending the refugees living in Turkey to Europe, and if he controlled the other major refugee departure point for Europe, he would have a trump card to play against the EU at will.

Lurking behind these dangers for Europe is the main challenge for the EU: despite the high-minded rhetoric of officials such as European Commission president Ursula von der Leyen, Europe is unlikely to become a geopolitical force because there is rarely a European consensus on major issues, Libya among them. Last April, French president Emmanuel Macron⁠—who ran for office rallying around the EU flag⁠—defied the rest of the bloc by nixing a resolution condemning a Hifter offensive. The reason for this is because French oil assets lie in parts of the country already controlled by the warlord. The result, as Erdogan acidly pointed out, has been European paralysis as its most cherished principles are openly flouted next door.

American Euroskeptics would be wrong to look at Europe’s problems with schadenfreude. Many of them argue that instead of providing a solution to the interminable conflict that has haunted Europe for millennia, the EU is just the newest method for France and Germany to dominate their neighbors, and the remarkably deep peace of Western Europe’s last seventy-five years is due to American security guarantees. They have a point, but Europhiles are right to notice how much more benign French and German hectoring is now than it was a century ago.

Moreover, as the United States shifts focus to the Indo-Pacific region, those security guarantees are likely to become weaker, and it is far better for the European states to argue in committee meetings than to revert to armed conflict. A very real alternative to Brussel’s bureaucratic officiousness is easy to imagine: it’s just beyond the sea.

Mike Watson is the associate director of the Center for the Future of Liberal Society at the Hudson Institute.