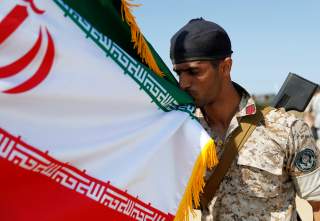 Like two hostile prisoners on the run and shackled to each other by fate, Iran and the United States continue their mutual loathing and periodic conflict. The inevitability of talking and even cooperating, however, also looms over both in a region neither can shape unilaterally. Washington and Tehran’s shared distaste for a wider military conflict and the gradual demise of the Iran nuclear agreement are again focusing attention on the path to any renewed U.S.-Iranian diplomacy.

History can be useful here. The ancient Persian encounter with the West began with a push in the mid-6th century BCE from the Iranian heartland. The stunning result was the consolidation of culturally diverse and mutually antagonistic kingdoms into an empire comprising the vast area of modern Iran, Iraq, Syria, Lebanon, Israel, and Turkey. Parts of the Ukraine, Bulgaria and Romania would be added by the early fifth century BCE. This strategic success hinged on highly adept internal diplomacy and effective administration by regional satraps or governors who were the Persian king’s eyes and ears and mouthpieces.

No wonder then that the story of Persia and the West in the fifth and fourth centuries BCE features strategic competition and conflict. That story begins with Herodotus’ account of the Persian Wars of 490 and 480–479 BCE and still shapes our modern perspective. But we ignore at our own cost the recorded instances of cooperation, respectful co-existence, and cultural exchange during these two centuries—patterns and precedents that can expand how we conceive of today’s U.S.-Iran rivalry. The kind of history Iran and the United States now choose to frame their future diplomacy will set the tone and define the limits of dialogue as much as the difficult issues to be negotiated.

We are not at a good starting point when recent history—overflowing with the mutual recriminations and humiliations spawned by the 1979 Iranian revolution—takes center stage. It is as if the two sides came into being ex nihilo right at that moment and took notice of each other for the first time. The United States emphasizes that Iran took U.S. diplomats hostage, kills U.S. soldiers in Iraq, spreads Shia radicalism, and threatens Israel’s existence. In Washington’s prism, the unacceptable pursuit of a nuclear capability, sponsorship of terrorism, and threats to global energy flows in the Persian Gulf are the tools of 1979 revolutionary Iran.

Iran, in turn, makes no apologies. It sees itself as the only power in the region able to resist U.S. dominance by means of its own political ideas, forms of religious governance, and muscling of military might. The United States is seen as the foreign enemy that infringed on Iranian sovereignty by backing a repressive Shah and now seeks to frustrate the revolution begun by overthrowing the Shah’s regime. Washington protects regional rival Israel, antagonistically deploys the U.S. Navy along Iran’s shores, bases land forces in neighboring Iraq, and seeks to contain Iran’s economic development through decades of sanctions. For both sides, the geopolitical cosmos is forty years old and both are reluctant to discuss publicly their recent tacit cooperation in taking down the ISIS Caliphate. What we will call the 1979 framework remains dominant.

This approach has outlived its strategic utility. The 1979 framework was plausible when the region’s governance was a mix of authoritarian republics and stable monarchies—a status quo that made Iran’s revolutionary religious identity and mass politics flash like a neon billboard the United States could not ignore. Moreover, Iran’s bid to export its revolution throughout the Middle East threatened a regional order dominated first by Cold War superpowers and then briefly the United States—an affront that the United States also concluded it had to challenge.

What Bob Dylan first sang in the early 1960s, however, still holds true: “The Times They Are a-Changin’.” The 1979 framework ill suits the evolving Middle East and undermines the potential for a restarting of U.S.-Iranian diplomatic engagement. Sub-state actors that operate violently across borders, an information and communications technology revolution, and an increasingly fragmented ideological landscape make up the new Middle East. Autonomous regional powers in the post–Cold war era are also shaping a new state system in which the United States and Iran are only two among a suite of claimants to regional influence. Iran’s 1979 revolutionary zeal and U.S. bids for preeminence now meet in a much more volatile setting. A nuclear agreement limited mostly to exchanging isotopes for dollars always faced a steep climb in accounting for these seismic regional changes.

A reprise of important attributes of Persian-Western relations since antiquity offers useful, new ways to conceptualize a potential diplomatic process in this moment of change. It’s important to remember at the outset that the Persian Empire was dealing with a “West” that was never a United States of Greece. Robert Graves’ satiric poem “The Persian Version” captures how the far-off regional skirmish at Marathon involving an infinitesimal fraction of the Persian military force fighting briefly on a single day against the soldiers of a still obscure pre-imperial city-state or polis (Athens) was viewed far off in Susa or Persepolis. Aesop’s fable of the flea and the camel gives us a truer picture. Marathon is just not an anchor for a binding narrative of Persian-Western conflict.

Instead of staying fixed in a Herodotean mindset of East-West antagonism, we might consider that we have the power and resources of the Persian Empire in the 6th–4th centuries BCE. Iran is the little guy, the resource-limited Athens. We would do well to consider a model of practical political ties as regional conditions change. In a few decades in the late 5th century BCE, Persia evolved from an existential threat to an external balancer of—some might say, meddler in—Greek affairs. In the 4th century BCE, Alexander the Great’s conquest of the Persian empire morphed from catastrophic score-settling to unprecedented political and cultural exchange. Even the religious chasm and military conflict between the Byzantine and Persian Sassanian empires in the 5th century CE were mediated by high-level diplomacy and buffered by sustained cross-border knowledge exchange of translations of Byzantine held secular and religious texts.

The Iliad—the culturally foundational ancient Greek epic that contains Near Eastern literary influences—offers a final lesson to Iran and the United States to stop perpetuating the bitterness of 1979. The Iliad reminds us that conflict does not inevitably consist of stereotypically evil enemies. Troy in Homer’s conception was a surrogate for a Greek city-state under siege. The poem presents sympathetically Troy’s king and queen, the prince commander of Trojan forces and his wife and infant child, and the nobility with which they face and endure their truly tragic fates. The Iliad concludes with the united population of Troy lamenting the death of their heroic prince commander Hector. The greatest Greek field commander Achilles, who knows he will die soon too, made this public ceremony at Troy possible by diplomatically granting an armistice after one-on-one discussions with the Trojan king Priam.

Still, all the miserable human suffering and loss throughout the Iliad was caused by an initial diplomatic failure and because hubris in the form of overreach against an enemy always has tragic consequences.

Andrew Gilmour, a retired senior CIA analyst, is author of A Middle East Primed for New Thinking: Insights and Policy Options from the Ancient World.

Tom Palaima, a MacArthur fellow, is Robert M. Armstrong professor of Classics at the University of Texas at Austin.