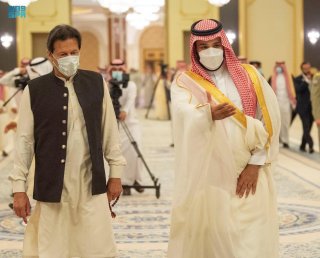 The Saudi-Pakistani relationship has demonstrated resilience to withstand challenges emerging from shifting geopolitical sands in South Asia and the Middle East. Their relationship, however, has been transformed in the process, requiring the top leadership on both sides to re-evaluate each other’s expectations, demands, and redlines to maintain the same level of relationship that had existed before 2015. Broadly, five factors account for the Saudi-Pakistani rapprochement.

First, both Islamabad and Riyadh are facing isolation and need each other more than ever before. Since coming to power, the Biden administration has given both Pakistan and Saudi Arabia the cold shoulder. Both Saudi Crown Prince Mohammed bin Salman (MBS) and Imran Khan, are yet to receive the customary calls from U.S. President Joe Biden since he took office. Biden, however, did call King Salman to show that his office wants to communicate with the head of the state. The U.S.-led Western nations have stopped assisting Riyadh over its war in Yemen, including some countries imposing weapon embargos on the kingdom. At the same time, Pakistan’s salience is diminishing in important Western capitals as the United States and NATO forces withdraw from Afghanistan. Besides, Islamabad has also been troubled by the Financial Action Task Force placing Pakistan on the grey list regarding terror financing.

To shake off the Western snubs, the Kingdom of Saudi Arabia has been mending its fences with important Muslim powers, such as Pakistan, Qatar, Turkey, and Iran. Riyadh needs Islamabad—the only nuclear Muslim power—to ensure that the latter does not drift towards Turkey and to retain its prestige as the undisputed leader of the Muslim world. Pakistan has historically supported the kingdom’s leadership of the ummah. Meanwhile, Pakistan needs Saudi largesse for socioeconomic reasons to avoid the International Monetary Fund’s harsh conditionalities.

Secondly, Saudi-Pakistani tensions were the manifestation of diverging strategic priorities, where despite drifting away, both countries still wanted to conduct their ties in a business-as-usual manner. This continued until they woke up to the vicissitudes of a changing operational environment and started addressing the irritants. Notwithstanding the above pressure, the ties never reached a breaking point because of a high level of inter-dependence between the two countries. Both Pakistan and Saudi Arabia are crucial Sunni-majority Muslim countries and beyond a point, they cannot afford to alienate each other. While Pakistan is economically dependent on Saudi Arabia, the kingdom is home to over two million Pakistani workers and enjoys advanced security cooperation with Pakistan.

Thirdly, in the context of the U.S. withdrawal from Afghanistan, the Saudis want a larger role in the post-U.S. Afghanistan and for that, they need Pakistan’s assistance. In the last few years and since Pakistan fenced a major portion of its border with Afghanistan, Iran has emerged as an important player and the former’s largest trading partner. For the Saudis, this is an alarming development.

For several years, Saudi Arabia has been a marginal player in Afghanistan. Doha has remained the central hub of diplomatic activities resulting in the signing of the U.S.-Taliban deal in February 2020 and the intra-Afghan negotiations. More recently, the Biden administration has proposed Turkey as a new facilitator of intra-Afghan peace talks.

This contrasts Riyadh’s roles in the 1980s and the 1990s, alongside Islamabad and Washington, as a major mover and shaker of the war in Afghanistan and as a facilitator of important deals, such as the Mecca Acord. Riyadh’s marginal role in Afghanistan has been due to its preoccupation with the Yemen war and estranged ties with Islamabad.

The fourth factor that has resulted in the restoration of the Saudi-Pakistani ties is the former’s success in de-hyphenating its India-Pakistan dealings, and alongside the Emiratis, establishing itself as a mediator between the two South Asian nuclear powers.

Until now, Islamabad was approaching its ties with Riyadh in a transformed geopolitical environment with a historical hangover of business as usual. When India reversed Jammu and Kashmir’s semi-autonomous status in August 2019 by revoking Article 370 and 35A, Pakistan expected a hard-hitting statement from the Jeddah-based Organisation of Islamic Cooperation endorsing its position on the issue. The Saudi reluctance to issue such a statement, given its deepening economic ties with India, troubled Islamabad. This left Riyadh in a catch-22 situation of balancing its relationship with a critical financial partner, India, and Pakistan, which plays a crucial role in helping Riyadh maintain its prestige in the Muslim world.

Pakistan’s planned strategic reorientation from “geo-strategy” to “geo-economy” necessitating normalization with India has played a vital role in its relationship with the Gulf states. As it has come to the fore that Pakistan’s backchannel diplomacy with India was facilitated by the Saudis and Emiratis, including some meetings between the spymasters of two countries in Abu Dhabi. In Prime Minister Khan’s recent trip, the Saudis have offered to continue mediating between India and Pakistan even on the Kashmir issue.

The final factor easing out tensions between the two traditional allies is that both countries’ new leadership, Khan and MBS, have developed a better understanding of each other’s expectations, demands, and limitations. It can be argued that the leadership on both sides has a better situational awareness of the dos and don’ts of bilateral relations.

As the recent developments demonstrate, the relationship between Pakistan and Saudi Arabia is deep enough to deal with multiple and diverse irritants.