Five Reasons for the Global Pushback on New Iran Sanctions 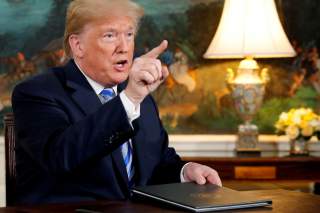 Not surprisingly the Trump administration’s precipitous withdrawal from the Joint Comprehensive Plan of Action (JCPOA)—known as the Iran Nuclear Deal—has lead to significant pushback from the other five signatories to the deal as well from several other nations which have benefitted from the agreement. This strong disagreement has also been amplified by President Trump’s decision to re-imposition sanctions on Iran which the Obama administration had canceled as part of the JCPOA.

The first sanctions were re-imposed on August 7, 2018. They included a ban on purchases of U.S. dollars by Iran and also prevent trade on gold, medals, and automobiles. The second, more draconian sanctions, which will go in effect November 4, 2018, the thirty-ninth anniversary of the takeover of the U.S. embassy in Tehran, and will sanction all Iranian oil exports to any country as well as any importers. The pushback against these sanctions is coming for at least five reasons.

First, the JCPOA was working much better than any previous multi-national arms accord. According to eleven reports of the International Atomic Energy Agency (IAEA), which has conducted the toughest inspections ever imposed on a country, Iran was complying with both the spirit and letter of the deal and its nuclear program had become exclusively peaceful. Since the inception of the deal in 2015, the Iranians have modified their heavy-water facility so that it could not produce plutonium suitable for a bomb as well as reducing its stockpile of enriched uranium by 98 percent and cut the number of centrifuges installed to enrich uranium by 13,000.

Second, since the JCPOA, Iran has increased its daily oil exports from about 1 million barrels a day to nearly 3 million. This increase has helped keep the global price of oil significantly below the levels of 2011 and 2012 when it reached more than $100 a barrel. America’s re-imposition of sanctions will not only increase oil prices but could lead to another global recession similar to the one that occurred a decade ago.

Third, the JCPOA allowed the comparatively moderate Iranian government of President Rouhani to win reelection because the deal allowed the Iranian economy to achieve more growth than it did during the period when the sanctions existed. Before Trump announced he was pulling out of the agreement, the Iranian economy was expected to grow by 4.3 percent this year. It is now expected to increase by only 1.8 percent.

Fifth, the U.S. withdrawal and re-imposition of sanctions appears not to be based on a clear strategy or have realistic objectives. Some of America’s allies and competitors wonder if Washington’s real goal is regime change, a policy that at least two European diplomats, involved in the negotiations with the United States over how sanctions will be imposed, believe is the goal. Others believe that the administration hopes, as Secretary of State Pompeo pointed out, that the sanctions can force Iran back to the bargaining table and get it to permanently end all its enrichment and its development of nuclear-capable ballistic missiles, return all American citizens, withdraw its forces from Syria and end its support for Hezbollah, Hamas, and the Houthis.

This pushback has come from both U.S. allies, strategic competitors and potential partners. All five of the other signatories of the JCPOA have said that they will ensure that Iran can still export its oil and gas. China, which imports 650,000 barrels of Iranian oil a day says it will not reduce its input. Turkey says that it will honor its contract to buy 9.5 billion cubic meters of Iranian gas over the next decade. India, which gets 18 percent of its oil from Iran and buys more oil than any country other than China, will continue to buy oil from Iran because the UN has not re-imposed sanctions.

While this pushback is understandable, there is little chance that it will get the Trump administration to change its mind. These sanctions will obviously hurt Iran and will most likely result in a situation that will not be good for the world or America. The Trump sanctions will further fray U.S. relations with America's major European allies, the United Kingdom, France, and Germany, who are already upset by Trump's erratic behavior at the recent North Atlantic Treaty Organization summit, the G-7 meeting, the U.S. withdrawal from the Paris Climate Accord and Trump's threats of steel tariffs.

In addition, re-imposing sanctions will empower America’s competitors. Russia, whose economy is extremely dependent on oil exports, will profit from the higher oil prices. China, which is not dependent on the U.S. banking system, like U.S. European allies, will increase its influence in Iran. Moreover, the U.S. withdrawal will make it more difficult to achieving its goal of establishing a strong defense partnership with India, which not only depends on Iran for much of its oil but is also investing $500 million to develop Iran’s Chabahar Port as a transit hub for Afghanistan, Central Asia, and the International North-South Transport Corridor. Finally, it will make it more difficult for the United States to make progress in getting North Korea to denuclearize. In fact, North Korea’s foreign minister came to Iran the day the U.S. imposed sanctions and was told by President Rouhani that America could not be counted on to keep its commitments.

As the United States contemplates increasing sanctions on Iran over the next ninety days, it should not only reflect on the pushback from other nations but on a warning former U.S. Treasury Secretary Jack Lew made in a 2016 speech. He warned that there is a risk that overuse of sanctions could reduce America’s capability to use sanctions effectively by driving global financial transactions and business away from the United States.

Image: FILE PHOTO: U.S. President Donald Trump speaks to reporters after signing a proclamation declaring his intention to withdraw from the JCPOA Iran nuclear agreement in the Diplomatic Room at the White House in Washington, U.S. May 8, 2018. REUTERS/Jonathan Ernst/File Photo