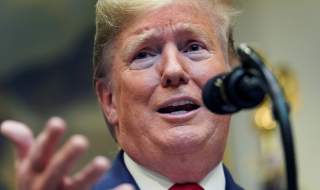 Words matter. Past presidents have parsed words, and employed a staff of speechwriters to get every nuance right. They understood that allies and enemies alike would pour over speeches to understand fully American policy, its future actions, and possible reactions. President Donald Trump, of course, was radically different. He didn’t believe in diplomatic weasel words nor did he care for the layer of aides meant to stand between him and his supporters.

Simply put, Trump broke the mold and while his approach has some advantages, when it comes to diplomacy, it also has done lasting damage. While the progressive wing of the Democratic Party will castigate Trump’s defiance of conventional wisdom on Israel policy—everything from moving the U.S. Embassy to Jerusalem to recognizing Israeli annexation of the Golan Heights to son-in-law Jared Kushner’s “deal of the century”—the real and lasting damage Trump has done to U.S. interests in the Middle East has nothing to do with Israel, but rather with his loose rhetoric and, specifically, these five statements

Speaking at a Florida rally at the height of his campaign in August 2016, Trump declared that President Barack Obama founded the Islamic State [ISIS]. “ISIS is honoring President Obama,” Trump said. “He is the founder of ISIS. He is the founder of ISIS, OK? He’s the founder. He founded ISIS. And I would say the co-founder would be crooked Hillary Clinton.” Most Americans understood that Trump was not speaking literally. The president threw mud, didn’t care about its accuracy, and wanted to highlight that the Islamic State rose on the Obama and Clinton (well, actually John Kerry) watch. More savvy pundits might argue that Obama’s withdrawal from Iraq paved the way for the group to fill the vacuum, but poor policy choices are different than actively creating a terrorist group. The problem is no one outside the United States cares about the ins-and-outs of campaign and electoral strategy. They don’t hear Obama, Clinton, or Trump; rather, they hear the United States. And so what Trump did, in effect, was to make a [false] confession of American culpability which the Iran, Turkey and other U.S. enemies say is proof positive that the United State deliberate sowed terrorism to kill Muslims and involve itself militarily in the Middle East. In effect, what Trump did was affirm all the conspiratorial themes of Iranian Supreme Leader Ali Khamenei. Unfortunately, Trump’s “confession” will resonate in the Middle East long after Trump is gone.

2. “The endless and ridiculous wars are ENDING!”

Trump caught the Pentagon, U.S. forces in Syria, and America’s Syrian Kurdish allies by surprise when the White House last fall issued a terse statement announcing an end to U.S. operations in Syria, essentially abandoning America’s Kurdish allies to Turkish designs. That’s bad enough on the moral level, but it is worse when Turkey’s culpability in the rise of the Islamic State is taken into account. Realists can split hairs and say there was no formal treaty relationship with the Syrian Kurds but rather just a temporary partnership of convenience. That may be true, but how partnerships end matter. The American people are exhausted by war, but leaders understand that partnerships have an amplifying effect that ultimately lessons the need for broader, more expensive deployments. Working with Syrian Kurds brought huge dividends and little cost. But, by throwing the Kurds under the bus, Trump has signaled to any future potential partners that they cannot risk working with the United States. Trump and his supporters may say fine; the United States should not be engaged overseas but the lesson of the last four administrations is the foreign policy crisis which defined each’s legacy was one that no one saw coming when Bush, Clinton, Bush, or Obama took their oaths of office.

As Trump first started floating the idea of a withdrawal from Syria, journalists asked him what that might mean given Iranian ambitions in the region. “They can do what they want there, frankly,” he said, essentially seeming to allow Iran to extend its reach to the Eastern Mediterranean and the borders of Israel. Such a comment seemed to cross the line between realist prudence about the limits of U.S. force versus isolationism that would undermine U.S. allies. In reality, however, Trump’s commitment to Israel remains strong. That just makes his off-hand remark more dangerous, should Iran feel emboldened to act more aggressively in Syria only to find itself engaged in actions which lead to U.S. or Israeli military retaliation.

It was also during the campaign that Trump first declared that his main strategy to combat the Islamic State and militancy in the Middle East would be to take their oil. “I would knock out the source of their wealth, the primary sources of their wealth, which is oil. And in order to do that, you would have to put boots on the ground. I would knock the hell out of them but I’d put a ring around it and I’d take the oil for our country,” he told MSNBC. Taking oil would become a persistent theme, and undercut America’s ability to form counterterrorism and other security partnership because Trump’s statements provided fodder for political oppositions across the Middle East to raise questions and populist anger against any agreement which would bring American forces into the region.  All of this might have been ignored, however, had it not been for the tone-deaf decision to redeploy U.S. forces around Syrian oil fields. Proponents of the decision say that it was the only argument that could convince Trump to keep forces in Syria. The problem is that the image of U.S. Humvees parked in front of oil derricks affirms decades of “war-for-oil” conspiracies that permeate the Middle East and broader Islamic world and will, in the long-term, do more harm to the United States.

5. “If Iran strikes any Americans... Iran itself, WILL BE HIT VERY FAST”

After the U.S. attack of Iranian Qods Force chief Qassem Soleimani, Trump tweeted a redline: “Let this serve as a WARNING that if Iran strikes any Americans, or American assets, we have targeted 52 Iranian sites (representing the 52 American hostages taken by Iran many years ago), some at a very high level & important to Iran &  the Iranian culture, and those targets, and Iran itself, WILL BE HIT VERY FAST AND VERY HARD.” While the press and Trump’s political opposition largely focused on the threat to attack cultural targets, an illegal action if carried out, just as significant was what Trump omitted. Iranian operatives and proxies had repeatedly attacked civilian airports and economic infrastructure in Saudi Arabia, and have mined international ships in Emirati waters. In September 2019, Iran attacked key oil infrastructure in Saudi Arabia. Trump’s red line appeared to greenlight such attacks by signaling to Tehran that they would face no American consequences for such aggression. If that’s the case, then it should be no surprise that Abu Dhabi and Riyadh are increasingly seeking to make an accommodation to American adversaries, not only in Tehran but in Moscow and Beijing as well.

There is more, of course. Trump’s statement that Russia was right to be in Afghanistan was farcical, but that might be better for a separate list about South Asia. And the glowing orb in Saudi Arabia was not a statement but just a bizarre image.

Trump’s supporters can say that his efforts to stop “endless wars” are necessary. It is certainly true that the United States is overextended. But if that’s the case, then it is also necessary to recognize that Trump’s statements can hamper that goal in the long-run rather than create the security and stability that would enable a more permanent withdrawal. Stupid rhetoric is simply bad policy.