Focus Assistance to Tunisia—Don’t Suspend It 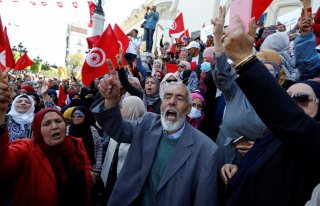 Tunisian president Kais Saied’s lurch toward authoritarianism since his July 25, 2021, power grab has led many in the United States and Tunisia to advocate for a cut-off of all U.S. assistance. However, even if suspending assistance is emotionally gratifying, it is unlikely to change Saied’s autocratic practices. Equally important, cutting off assistance altogether would not serve U.S. interests or help the Tunisian people. Instead, the United States should use its bilateral assistance—and its influence in international financial institutions—to further its core interests in Tunisia: security and democracy.

Henry Kissinger famously, and some might say cynically, once observed that America has no permanent friends or enemies—only interests. Security and democracy are the two primary U.S. interests in Tunisia. Both transcend Tunisia’s borders, which is why they are important and why the United States should continue related assistance programs.

When I departed Tunisia ten years ago after serving as U.S. ambassador, security was one of the most significant challenges Tunisia faced for both internal reasons—the Ennahda-led government’s unwillingness to confront the increasing threat from violent Salafists—and external ones—instability in neighboring Libya and the rise of ISIS. The security situation only worsened in the next few years, as witnessed by the September 14, 2012, Salafist attack against the U.S. Embassy; the 2013 assassinations of two opposition leaders, Chokri Belaid on February 6 and Mohamed Brahimi on July 25; and terrorist attacks in 2015 against tourist sites, the Bardo Museum on March 18 and a hotel on the beach in Sousse on June 26.

Since then, however, Tunisian capabilities have increased significantly due to the government’s heightened focus on border security as well as assistance and training from the United States and other partners. Terrorism remains a threat—and will not recede for at least as long as instability in Libya continues—but the country is safer now.

Yet no nation is immune to the transnational threat that terrorism poses, and Tunisia is no exception. Its location means that neither the United States nor its NATO allies on the Mediterranean can afford an unstable Tunisia. It is, therefore, misguided to reduce security assistance by almost half—from $112 million to $61 million—as proposed in the administration’s budget for fiscal year 2023. Assistant Secretary of State for Near Eastern Affairs Barbara Leaf signaled the importance the United States places on security in her separate meetings with the Ministers of Defense and Interior during her August 29-31 visit to Tunis.

The survival of Tunisian democracy has an outsize importance at a time of global autocratic revival. Elliott Abrams, former deputy national security advisor to President George W. Bush, correctly observed that “autocracies like China, Iran, and Russia will welcome the collapse of Tunisia’s democratic aspirations as more ‘evidence’ of the failures of democracy as a system.”

The State Department’s Congressional Budget Justification for FY 2023 explains that the proposed allocation of economic support funds would be provided to civil society organizations, rather than the government, “in light of uncertainty regarding Tunisia’s political direction.” This approach is exactly the right one to take in the current situation.

Saied’s autocratic actions have jeopardized the economic assistance that is important for Tunisia’s recovery. On June 30, 2021, less than a month before Saied began his power grab by freezing parliament, the Millennium Challenge Corporation (MCC) approved a “$498.7 million compact with the Government of Tunisia to strengthen Tunisia’s transportation, trade, and water sectors.” Tunisia desperately needs this type of assistance, which would benefit the average citizen much more than the authorities.

But it is inconceivable that the MCC will now allow the program to proceed given the dramatically changed political landscape since it approved the compact. Grants can only go to countries that meet “rigorous standards for good governance, from fighting corruption to respecting democratic rights,” as the MCC noted when it announced the compact’s initial approval.

Concluding a $4 billion loan agreement with the International Monetary Fund (IMF) is even more important for stabilizing the Tunisian economy. The IMF team that visited Tunisia in mid-July rightly emphasized the importance of “broad buy-in” when it reported on its meetings. The United States should insist on a return to democratic norms as a condition for an IMF loan package proceeding, and it should make its expectations explicit.

It is also difficult to see how an IMF agreement would win popular support. Saied’s approach to rewriting the constitution was the opposite of inclusive. Moreover, he dissolved parliament, so there is no avenue for legislative approval.

Ultimately, there is only so much the United States can do. Friends of democracy should support their Tunisian counterparts, but it is of course up to Tunisians to choose their country’s future path. By the time the next presidential elections take place in 2024, it’s very possible that Tunisians will have tired of Saied. Their focus is on the economy. Saied’s blend of Ben Ali’s authoritarianism and Muammar Qaddafi’s political philosophy is unlikely to meet Tunisians’ pressing needs.

Gordon Gray is a professor of practice at Penn State’s School of International Affairs. He is also a nonresident senior fellow at the Center for American Progress and at the Institute for the Study of Diplomacy at Georgetown University. He was a career Foreign Service officer who served as U.S. ambassador to Tunisia at the start of the Arab Spring and as deputy assistant secretary of State for Near Eastern Affairs.  Follow him on Twitter: @AmbGordonGray.