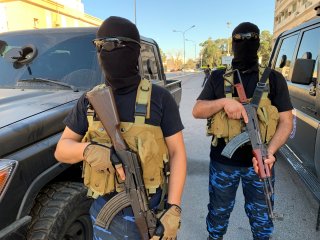 Almost a decade after the first protests of the Arab Spring, the chaos has largely abated. Syrian president Bashar al-Assad, whose government once teetered on the brink of collapse, now happily rules the graveyard he helped to create. The Islamic State terror group has been defeated in Iraq, though tension remains between the country’s Sunnis and Shi’ites. The regimes that avoided major protests and remained firmly in control—primarily in the Gulf, as well as Morocco and Jordan—have used the Spring as a cautionary tale about the consequences of revolt. Despite this trend, Libya, Africa’s gateway to Europe, remains at war.

Libya has never had a Western-style, institutional bureaucratic government. For centuries, it was ruled as a collection of frontier provinces by the Ottoman Empire. In 1911, they became Italian colonies, unified under Mussolini into one administrative unit. After World War II, the Allies installed a local king, Idris, who ruled until his deposal in a 1969 military coup led by Col. Muammar el-Qaddafi. During his forty-year tenure as dictator, Qaddafi made some improvements to the country, investing in infrastructure and social services and establishing a network for oil patronage; however, he is better known in the West for his neurotic personality and his support for various terrorist causes throughout the twentieth century.

The current conflict in Libya filled the power vacuum left by Qaddafi’s death in the wake of the Arab Spring. Today, the capital city and its surrounding territory is controlled by the UN-recognized Government of National Accord (GNA), led by technocrat Fayez al-Serraj. The rest of the country is theoretically controlled by the Tobruk-based House of Representatives (HoR); in practical terms, however, it is ruled by Libyan warlord Khalifa Haftar, who commands the HoR’s Libyan National Army (LNA).

Haftar, aged seventy-six, is Libya’s preeminent warlord. As a young officer, he participated in the 1969 coup that brought Qaddafi to power and later commanded the Libyan Army during its disastrous invasion of its southern neighbor Chad. In its aftermath, he fled to the United States and acquired American citizenship, later returning to Libya after the Arab Spring and helping to create the LNA. Since 2014, Haftar has demonstrated his skill as a commander, destroying the Islamic State and other Islamist militias within Libya and establishing control over most of the country.

Most post-Arab Spring conflicts have been proxy wars fueled by outside backers. Libya is no exception, and both Serraj and Haftar have worked hard to cultivate foreign patrons. Other Middle Eastern conflicts have typically featured Saudi Arabia on one side and Iran on the other; the two major regional powers have fought a long cold war throughout the Middle East, and they continue to back opposing sides in Yemen. Both, however, are largely absent from Libya. Also conspicuously absent is the United States, which helped to overthrow Qaddafi but then distanced itself from the carnage that followed.

Instead, the two factions have turned to other powers within the Middle East. Serraj, whose government was created by a UN-brokered compromise, has secured aid from Turkey and from Europe. Haftar is backed by a coalition of Arab autocrats, notably including Egypt and the United Arab Emirates. He is also supported by Russian president Vladimir Putin, who has sent him mercenaries, weapons systems, and at least $3 billion in counterfeit Libyan banknotes.

Of the two coalitions, Haftar’s is easier to understand. If he should win, then it is generally believed that he will bring about a secular military dictatorship in Libya, friendly to Arab autocrats and hostile to Islamists. Predictably, Arab autocrats, many of whom have struggled against Islamists within their own countries, would favor such an outcome. This is especially true of Egyptian president Abdel Fattah el-Sisi, who took control of Egypt from Muslim Brotherhood leader Mohamed Morsi. Egypt shares a twelve-hundred-kilometer border with Libya and would clearly benefit the most from the security that a stable regime in Tripoli would provide. Consequently, with Sisi’s support, the Egyptian parliament voted on July 20 to authorize an intervention in Libya.

On the other side, Serraj is tacitly supported by Europe, which has recognized his government as the legitimate authority within Libya. However, Serraj’s most forceful benefactor has been Turkey, led by President Recep Tayyip Erdogan. Erdogan is an Islamist who has pushed back against Turkey’s historic secularism and feuded with many secular Arab autocrats, notably Bashar al-Assad in Syria. Whether motivated by ideology or more basic geopolitical concerns, Erdogan’s support for the GNA played a decisive role in its counteroffensive against Haftar’s LNA in Spring 2020. The battle lines drawn in Libya seem to resemble those of the Arab Spring, albeit in reverse – an uneasy coalition of democrats and Islamists forming the “legitimate” government, and an autocrat in rebellion.

Which side is winning? Until the spring of 2020, Haftar was; the LNA on the offensive, controlling roughly three-fourths of Libya and fighting in the outskirts of Tripoli. However, in the spring, the GNA launched a successful counteroffensive, seizing key Tripoli suburbs as well as the city’s airport. For Haftar, the battle resulted in a decisive defeat, and since the LNA’s withdrawal, Haftar’s forces have remained on the defensive.

With Haftar’s decisive loss in Tripoli, outside diplomats have seen an opportunity to seek peace. On July 1, UN Secretary-General Antonio Guterres spoke on the phone with Haftar, urging him to enter further negotiations with Serraj and “reiterat[ing] that there was no military solution to the conflict in Libya.” Haftar’s response was not recorded in the UN’s summary of the meeting, but on August 23, he rejected a GNA-proposed ceasefire, and, when the House of Representatives accepted it on his behalf, promptly violated it.

At this point, an immediate military solution to the Libyan conflict seems unlikely. Haftar’s defeat in Tripoli suggests that he lacks the power to conquer the GNA by force. However, it is implausible to think that the GNA could now proceed to conquer Haftar’s territory; his support is still strong in Libya’s east and south. Consequently, with neither side strong enough to mount major operations against the other, the war seems headed for a stalemate, at least for the time being.

Still, Haftar has reason to hope for the future. Despite his successful offensive, Serraj’s political support has shown signs of faltering; in recent weeks, there have been major protests in Tripoli over corruption and the inability of the GNA to deliver basic social services. The GNA has dispersed these demonstrations by force, sometimes using heavy weapons. These images hurt Serraj domestically and help to discredit his government on the international stage. Second, Egypt’s vote to intervene on Haftar’s behalf if the situation required it is a major show of support; Egypt has also threatened to intervene militarily if the GNA attempted to capture Sirte, the closest major city to Tripoli. Finally, the recent peace deal between Israel and the UAE benefits Haftar; by announcing peace with Israel, the UAE has gained political flexibility in the West, allowing it to support the LNA more firmly. If Haftar’s situation further improves, then it is possible that he might mount another offensive for Tripoli in the coming years.

Throughout this war, the United States has remained on the sidelines. President Donald Trump has publicly affirmed his intentions to remain disengaged from Libya, and it is likely that, under a second Trump administration, the government will continue to do so. Even under a Biden presidency, it is hard to see any action that the United States could take that would improve the situation in Libya. It might be more prudent for the next president to wait, observe, and gauge the impact of other foreign interventions in the conflict. Whatever the case, it is certain that there will be no easy decisions for American policymakers concerning Libya’s future.