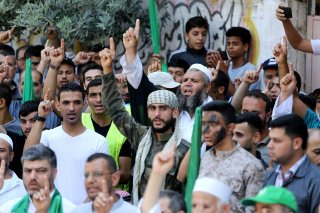 Beginning this summer, the Israeli government will be able to upend a decades-long status quo with the Palestinian Authority by voting for the annexation of the West Bank. Divided into Areas A, B, and C, the West Bank consists of a meandering, complex system of interwoven communities of Israelis and Palestinians. Area C, which constitutes 61 percent of the West Bank, has been fully controlled by Israel since the 1995 Oslo II Accord. The prospect of Israel annexing significant blocs of Area C as part of its mainland territory is increasing. This is important because Area C is also where the vast majority of the West Bank’s water, agricultural, and mining resources are located.

When nations attempt to exert control over or monopolize shared essential resources, advocates can argue they are doing so to enhance their own security. They may in fact be doing the opposite. Depriving marginalized groups of necessary resources intensifies tensions and makes conflict more likely. By voting for the annexation of Area C, the Israeli government could permanently withhold economic development opportunities for a future Palestinian state and worsen long-term security needs for Israelis.

The Israeli Supreme Court affirmed in 2011 that private Israeli companies are entitled to exploit natural resources in Area C. Two years later, a World Bank report found that if Palestinians had adequate access to the lands and resources of Area C, Palestinian GDP would increase by over $3.5 billion, or 35 percent. In essence, the report argues existing policy restrictions and the bureaucratic complacency of Israel’s Coordinator of Government Activities in the Territories prevent Palestinians from extracting value out of the natural resources in the area.

For the roughly three hundred thousand Palestinians living in Area C, obtaining permits for construction, agricultural development, housing, or infrastructure from the Israeli government has historically been difficult due to a bureaucratic impasse. Israel has granted thousands of permits for Israeli settlers in Area C over the last decade while granting a maximum of just fifteen annually to Palestinians. Overall, less than four percent of Palestinian building permits have been approved by Israel since 2000. This is largely attributed to 70 percent of Area C being off-limits to Palestinian construction, which falls under the municipal jurisdiction of local settlement councils. Palestinians living in Area C are barred from conducting development activity in these jurisdictions due to their lack of Israeli citizenship. But even in the 30 percent of Area C territory outside of these settlement blocs, many economic development and infrastructure projects that have been pitched by the Palestinian Authority have never been carried out. This is largely due to either outright rejection or long-drawn-out deliberations between government officials.

In July 2019, Israel’s security cabinet demonstrated a willingness to support Palestinian-led development with its approval of 700 new Palestinian building permits alongside the provision of 6,000 new Israeli settlement permits in Area C. Despite this promise, no formal announcement or plans have been released. It remains unclear whether these newly issued permits pertain to new construction or legalization of existing buildings. Regardless, these permits will be for Palestinian homes, not building new infrastructure for economic development or resource extraction.

While significant disparity exists in infrastructure development, it’s important to note that an unequal provision of permits does not necessarily result in inadequate access to basic resources. In the case of access to water, it is a more complicated story.

According to one study, the Israeli-Palestinian Joint Water Committee has a permit approval rate for Palestinian water projects approximately 20 to 50 percent lower than Israeli water projects. However, Israel also supplies West Bank Palestinians with over 248 million of cubic meters of water (MCM), which is 21 MCM above its obligation of 227 MCM under the Oslo II Accord. This has resulted in over 95 percent of Palestinians in the broader West Bank having access to water infrastructure and safely managed sanitized water. Despite the greater flow of water coming from Israel, many of the most water insecure communities in the West Bank are in Area C, as they are not connected to the Palestinian water network and therefore face higher prices of using water tankers instead. The quality of this water is also typically poor and has both negative health and economic impacts on these communities. Annexation of Area C would make this situation permanent.

Competition over scarce resources is known to be a major incendiary component of conflict. Israel is no stranger to this, as it has a long history of defending its own agricultural and water resources to survive. In a 2017 report entitled, “Security First,” over two hundred retired Israeli generals, intelligence officers, and police officials made the case for improving the welfare and economic vitality of Palestinians in the West Bank as a way to relax tensions and social unrest. They specifically cite the lack of building permits, agricultural development, and restrictions on the transport and export of goods in Area C as impediments to political and social stability. As basic livelihood and sustenance relies greatly on economic and natural resources, their accessibility becomes a literal matter of life and death in situations where competition escalates to conflict.

Since the 1967 Six-Day War, Israel has controlled some of the most resource-abundant places in the region, including the Golan Heights and Area C. The Israeli government’s monopoly over new settlement construction, construction permits, and water supply is now exacerbating social strife and conflict in Palestinian communities in Area C by suppressing economic development and access to those resources. Annexation could further hinder a viable peace, solution and cooperation as a result.

Individual empowerment and opportunity are the backbone of any sustained and secure society. Uprisings and subsequent conflict becomes ever more likely with growing uncertainty of access to basic resources like food, water, and housing. Israeli annexation would make this uncertainty set in stone by significantly limiting Palestinian’s ability to develop and cultivate land in Area C. Annexation could constrain the viability of an economically independent Palestinian state and thereby potentially damage Israel’s own long-term security.

David Harary is the Board Chair of the Center for Development and Strategy and a Fellow with the Climate and Security Advisory Group in Washington, D.C. His writing has been published in Slate, the National Interest, the Bulletin of the Atomic Scientists, and The Jerusalem Post. He serves on the D.C committee of Israel Policy Forum’s ‘Atid’ young professionals group.