Forty-Five Years After the 1973 War, Israel Faces Another Year of Decision 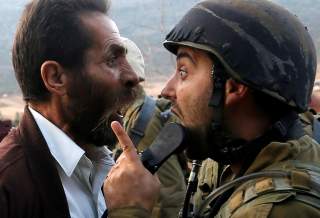 Analogies are ever so imperfect. In the Arab-Israeli conflict, it’s rare for history to repeat itself, or even to rhyme. Yet the similarities between an important development in Israeli-Palestinian relations that occurred earlier this month and a tragic chapter in the history of the conflict that took place some forty-six years ago are striking. At that time Israel was presented with an opportunity to avoid another major Arab-Israeli war—an opportunity that it missed as it was caught in a web of baseless premises and miscalculations. The choice Israel faces today should be equally clear, but Israel may remain similarly captivated by a different but equally debilitating set of false premises and wrong-headed policies.

Curiously, Israel now seems to be at the doorstep of another Year of Decision. On October 5, exactly forty-five years after Egypt launched the 1973 War, Hamas leader Yahia Sinwar opened a Sadat-like direct conversation with the Israeli public. Granting a first-ever detailed interview to an Israeli newspaper, Sinwar painted a dire picture of the conditions in the Gaza Strip and presented Israel with a stark choice: negotiate an armistice that would include an end to Gaza’s “siege” and a commitment by both sides to cease their fire or face another major eruption of violence.

Thus, Sinwar sent the Israeli population a simple message: the incarceration of some two million Palestinians in a large-scale prison in which electricity, drinking water and gainful employment are scarce is unacceptable and unsustainable. The costs and casualties of another round of violence will be very heavy and the Palestinian residents of Gaza will bear the brunt of these costs. Yet Hamas is determined to bring the current situation to an end: if the Palestinians residing in Gaza are condemned to suffer the various manifestations and consequences of “the siege,” Israelis will be made to suffer as well.

Sinwar’s decision to speak to Israelis directly about the price of their government’s continued stalemate with Hamas in Gaza was met with skepticism. After all, Sinwar is known in Israel as a killer who personally “liquidated” at least thirteen Palestinians who were suspected of collaborating with Israel during the 1988–90 First Intifada.

But Israelis may want to contemplate the run-up to the 1973 War before they reject Sinwar’s warning out of hand. Like the Hamas leader today, replacing Gamal Abdul Nasser, Egypt’s “larger-than-life” revolutionary leader in 1970, Egyptian president Anwar Sadat in 1970–72 warned repeatedly that his country would never accept Israel’s occupation of the Sinai Peninsula—a vast area it captured during the June 1967 War. Sadat emphasized that his country was willing to pay any price and bear any burden to restore its sovereignty over what it considered sacred land. To back up his warning, he ordered that a million people be relocated from their homes in the Suez Canal zone in order to allow Egypt’s military to engage Israel in almost two years of static warfare tit-for-tat attacks called the War of Attrition.

As the war evolved and attrition continued, Egypt demonstrated its willingness to accept heavy casualties while refusing to bend to Israel’s punishing response against Egypt’s industrial infrastructure. When its own means proved insufficient to dissuade Israel from continuing its relentless in-depth bombing, Egypt invited the Soviet Union to station air squadrons and an integrated air-defense division on its soil.

The 1969–70 War of Attrition ended in a draw—despite these efforts, Egypt failed to dissuade Israel from ending its occupation of the Sinai Peninsula, and Israeli forces remained deployed where they were at the beginning of the war: along the Suez Canal. Realizing that Israel did not understand the message and was not yet persuaded by the nearly two years of fighting, Sadat sharpened his verbal threats while also offering Israel a way out. Calling 1972 “A Year of Decision,” he warned that Egypt was willing to sustain half a million or even a million casualties if this that is what it would take to liberate its sacred lands.

At the same time, using various diplomatic channels, Sadat offered Israel a path to avoiding war: an interim agreement that would entail a partial Israeli withdrawal that would allow Egypt to reopen the Suez Canal, thus ending its strangulation and reactivating its very important source of hard currency.

Israeli prime minister Golda Meir rejected Sadat’s initiative, remaining stubbornly wedded to the policy Israel adopted soon after the 1967 War: namely, that it would not withdraw from the territories it “liberated” except in exchange for “real peace” and that, even for such a coveted prize, it would only withdraw to what it would consider “defensible borders.” What criteria would be used to grade borders as “defensible” was left ambiguous. Clearly, however, such borders would differ significantly from the lines Israel held prior to June 1967. The latter boundaries, which coincided with the international border between Egypt and mandatory Palestine, had previously been accepted by both Israel and Egypt in the framework of their 1949 Armistice Agreement.

Israel’s Golda Meir’s rejection of his initiative left Sadat no choice but to follow through on his threats and launch the October 1973 War—and yet, because of a chain of intelligence failures, Israel was badly surprised by the attack. Egypt’s casualties were far lower than what Sadat indicated that his country was willing to endure, while Israel’s were far higher than in any war it fought since 1948. The military struggle bruised Israeli confidence badly. That Israel was so surprised by the October 5 attack—despite three years of sustained Egyptian signaling—remains incomprehensible to this very day. Thus, in the war’s aftermath, Israel accepted everything it earlier rejected: two interim agreements in 1974–75 that entailed Israeli withdrawals in exchange for far less than “real peace,” and a peace treaty in 1979 that stipulated Israel’s complete withdrawal from every square inch of Egyptian territory.

Curiously, Israel now seems to be at the doorstep of another Year of Decision. Like Sadat’s 1972 proposal that offered far less than peace in exchange for a limited Israeli withdrawal that would allow a reopening of the Suez Canal, Hamas leader Sinwar is not offering to amend Hamas’s ideological rejection of Zionism. Nor is he hinting at any willingness to lessen his movement’s historical commitment to liberate all of Palestine and restore Islamic control over its sacred land. But like Sadat’s suggestion to begin by implementing limited steps that will end Egypt’s strangulation, Sinwar is offering to set aside Hamas’ historical aspirations in exchange for creating the conditions that would promise Gazans normality and prosperity.

Sinwar’s narrative seems to be realistic on at least three counts. First, he assesses the distribution of power between Hamas and Israel as favoring the latter dramatically. This also informs his estimate that the Palestinian side will suffer far greater casualties and higher costs in any additional rounds of Gaza-Israel fighting. Second, Sinwar correctly regards Israel as unwilling to dislodge Hamas from Gaza at the cost of reoccupying the Strip’s two million inhabitants. Finally, the combination of these considerations informs his “net assessment,” namely that an additional round of violence will achieve nothing: after the fighting ceases, Israel will face the same dilemmas it now faces, because Gaza will never accept the punishing life associated with the “siege.” Or, as Sinwar told the interviewer: “And after having said all this, it’s important to make it clear: if we are attacked, we will defend ourselves. As always. And we will have another war. But then, in a year, you will still be here and I will again tell you that you achieved nothing through war.”

How have Israelis responded so far to Sinwar’s offer? Surely, they have good reasons to be skeptical. As was the case forty-five years earlier when Sadat was only known to Israelis as the obedient deputy to the charismatic President Nasser who saw Israel as a colonial-imperialist project and who threatened to throw Israel’s Jews into the sea, Sinwar is known in Israel as a killer.

More strategically, will today’s Israeli government learn from the experience of 1973? Many Israelis argue that Sinwar’s proposals—to cease fire and transform Gaza into a second Singapore—will further strengthen Hamas at the expense of the secular nationalists that partnered with Israel at Oslo. Yet it is difficult to escape the irony embedded in this reaction given that Israel’s current government has done almost everything to weaken the secular-nationalists that head the Palestinian Authority (PA).

More compelling are Israeli fears that Hamas will use the financial windfalls associated with the end of the siege to strengthen its military capacities in anticipation of a more horrific future eruption of violence. With such enhanced capabilities, it is also feared that Hamas will attempt to pursue more ambitious objectives—those that Sinwar says he is willing to set aside but that his movement will not abandon. For this reason, some Israelis will insist that any armistice agreement with Hamas must include its complete disarmament—a demand that Hamas flatly rejects and which no Israeli would accept if she or he was in Hamas’ position.

Finally, some Israelis will demand that any talks with Hamas should first focus on it releasing the two bodies of Israeli soldiers that have remained in its possession since the summer 2014 war, as well as the two Israelis who later entered into Gaza in circumstances that are yet to be clarified. While Hamas is likely willing to release Israelis of both categories as part of an armistice agreement, it is unlikely to agree to do this outside of such a deal except for a price that Israel is unprepared pay.