The Future Is Now: Iran's Drought Crisis Is Fueling the Country's Political Instability 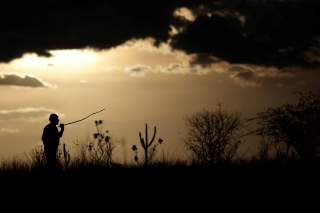 In recent weeks, Iran has experienced a number of demonstrations protesting the lack of clean water in southwest Iran. Oil wells and sugar cane refineries, the historic economic lifeblood of the region, contribute to the crisis by polluting the water and inflicting residents with a myriad of health complications. Broken water pipelines, extended water outages, and widespread illnesses caused by the consumption of contaminated water resulted in an extensive grassroots response from those impacted by the crisis.

While protests against Iran’s oppressive regime are hardly a new phenomenon, the recent uptick in demonstrations focused on grievances related to the Iranian government’s mismanagement of environmental issues should be of great concern to regime officials. Specifically, the rising discontent in the oil-rich Iranian province of Khuzestan, located along Iran’s western border with Iraq, is a rational response to years of policy failure and troubling environmental trends that have long plagued the region. Khuzestan’s water crisis and the public backlash that it caused are a preview of the challenges the province will face in the coming years, and the environmental degradation that threatens Iran could present serious political, social, and economic challenges to the Iranian government.

Iran’s southwestern region is not simply troubled by the lack of clean water, but also by a shortage of available drinking water in general. Droughts and dust storms have become increasingly common in Khuzestan, and higher-than-average rates of evaporation have exacerbated this issue across the country, with, “an estimated two-thirds of rainfall (evaporating) before it can replenish rivers.” Unfortunately, climate change threatens to further exacerbate this crisis in coming years. Experts project that rainfall in the region is, “expected to fall 20 percent by the end of the century, and temperatures could rise by as much as 5 degrees Celsius.” These factors, combined with a marked rise in dust storms, will result in water becoming even more scarce a commodity.

No Iranian province has been more adversely impacted by these trends than Khuzestan, a region which has long been a source of strife for the Iranian government. Originally called “Arabistan,” Khuzestan has the largest concentration of ethnic Arabs in the overwhelmingly Persian state of Iran, which has historically made the region a hotbed for Ahwazi Arab separatist activity, anti-regime protests, and calls for improved governance. Khuzestan is the most oil-rich province in Iran, yet poverty rates among the Ahwazi Arabs are staggering. Residents have long criticized the Iranian government for ignoring regional concerns, and many blame the current water crisis on Tehran’s decades of neglect for Khuzestan’s deteriorating environment.

Iran’s central government indeed deserves its fair share of the blame for the current state of Khuzestan’s water. Former Presidents Akbar Rafsanjani, Mohammad Khatami, and Mahmoud Ahmadinejad oversaw the development and expansion of the industries that have devastated the environment in southwestern Iran with little regard for their ecological impact, while the central government has long tolerated entrenched corruption within the bureaucracies assigned to address such concerns. The construction of several large dams designed to provide stable sources of water for industrial refineries, as well as planned diversions of key rivers to supply water to other provinces, has further contributed the water shortage.

Iran’s long history of ignoring or suppressing scientific findings that contradict the official positions of the regime have further stifled efforts to address the crisis. Many of Iran’s leading scientists and academics fled the country in the years following the revolution, and those who remained to warn of the coming calamity were largely ignored, or worse. Iran’s Revolutionary Guard went so far as to arrest a team of forty Iranian scientists in May on charges of espionage, further damaging the prospects of open communication between experts and the government on issues of environmental protection. Iran’s water czar Kaveh Madani, a renowned water conservation expert whose appointment as a deputy to the Department of the Environment was celebrated as a step in the direction of reform, faced similar harassment from the state, prompting his resignation and departure from Iran.

Local outcry against the government’s failures to address the problem is likely to increase further as water scarcity in Khuzestan becomes more pronounced, which could trigger the existing fault lines in Khuzestan’s relationship with the whole of Iran. Continued mismanagement of the region’s water will strengthen the deeply-entrenched narrative that the Iranian government views its Arab population as second-class citizens and Khuzestan as a province from which it can extract resources while minimizing the assistance it provides to its residents. Khuzestan is therefore likely to see a marked increase in the size, frequency, and intensity of its grassroots activism and protests against the Iranian government if the water crisis remains unaddressed.

Should Khuzestan experience a greater spike in anti-regime activism, it could deal a significant blow to the Iranian economy. The Khuzestan Basin is home to roughly 80 percent of Iran’s on-shore oil reserves, and oil has long played an outsized role in Iran’s economy, with oil rents accounting for over 13 percent of Iran’s GDP in 2016, according to World Bank data.

If Khuzestan’s protests and activism become widespread enough to meaningfully disrupt oil production, it could significantly affect Iran’s oil exports, as well as domestic energy prices. These disruptions could come in the form of strikes among local oil workers or protests staged around critical energy infrastructure that create labor disturbances, intentionally or otherwise. Iranians are intimately aware of the economic impact of politically-motivated disruptions in oil production, as strikes and worker slowdowns throughout the industry did significant damage to the economy during the Iranian Revolution. Iran’s oil infrastructure could also becoming a more frequent target for Sunni and Arab separatist groups, who have attacked pipelines in the past and could see a rise in popularity as the water crisis convinces more disaffected Iranian Arabs of their government’s unwillingness to protect them.

Finally, the Iranian government should be very concerned with the broader social and political implications of the ongoing water crisis. While Khuzestan has arguably been dealt the most serious blows by the water crisis, the damage has hardly been contained to southwest Iran. The Iran Meteorological Organization concluded that approximately 97 percent of the country experienced some form of drought conditions in March of 2018 even as nationwide water usage remained alarmingly high, bodies of water such as Lake Urmia in the north have frequently been at risk of completely drying up, and water shortages sparked violence in cities as large as Isfahan this past spring.

Just as the deepening water crisis could sow greater seeds of discontent in Khuzestan, so too could those seeds take root throughout the rest of Iran. More sustained droughts, increased mortality rates and spikes in food prices caused by water shortages, and decreases in oil production resulting from instability in Khuzestan, could spark a new wave of discontent amongst the broader Iranian population. Iran’s government enabled the water crisis not simply due to its bureaucratic mismanagement, but also because it consistently chose to prioritize factors such as short-term economic gains and the maintenance of social control over taking the steps necessary to address the long-term sustainability of the environment. Ironically, the decision to allow Iran’s environment to deteriorate to such a degree will likely force Iran to confront even more significant economic and social challenges down the road.

Khuzestan’s water crisis should certainly register as a serious concern for Iran’s government, and is likely to become an even greater threat as the effects of climate change deepen in the coming years. While the underlying source of the problem is an environmental one, much of the blame for the current crisis falls on the Iranian government, which has shown little willingness to address the significant structural concerns that contribute to the crisis. If Iran fails to develop a workable solution to the water crisis, observers are likely to witness a rise in instability and civil unrest in Iran as drought conditions worsen.