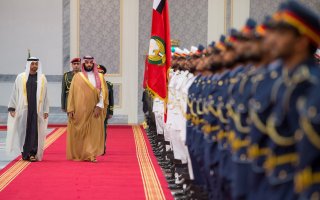 U.S. President-elect Joe Biden faces an array of critical issues upon taking office in a few weeks’ time, not only at home but in the Middle East and around the world.

One reminder of the urgency and magnitude of these crises came in Friday’s announcement by the International Atomic Energy Agency (IAEA) that Iran’s regime plans to install hundreds more advanced uranium-enriching centrifuges at an underground plant, a flagrant breach of the landmark 2015 nuclear deal, the Joint Comprehensive Plan of Action (JCPOA).

While President-elect Biden is understandably most concerned with tackling domestic issues, action on the multiple crises concerning Iran, not only over its nuclear program but in relation to its various severely destabilizing regional activities, can’t be delayed until later. Without urgent action, these threaten to further destabilize the already troubled region and the world. Saudi Arabia, which is coordinating closely with our brotherly Gulf counterparts to help ensure long-denied stability and peace in the region, is keen to work with the new U.S. administration and to play a key role in preventing further regional tensions.

While the ongoing efforts by Saudi Arabia to resolve tensions in the Gulf region will help these nations adopt a unified stance towards the very real and worsening threat which Iran currently poses to the Middle East, without the United States adopting a strong stance to deter Tehran from continuing with its nuclear weapons program and other damaging regional activities, their effect will be limited.

It is clear, of course, that this is one of a range of pressing foreign policy concerns facing the president-elect, which also include the U.S. relationship with the European Union, the mounting crisis with China, the relationship between Moscow and Washington, and the Paris climate treaty from which the incumbent American president Donald Trump withdrew. In addition to these issues, the new president needs to address older but still critically important concerns, particularly in the Middle East. These can be broadly divided into four main categories: the Palestinian question, the issue of terrorism, the Yemeni crisis, and the Iranian conundrum. Biden is already familiar with these issues, having engaged with them during his tenure in office as vice president to former U.S. President Barack Obama.

However, facts on the ground indicate that the Iranian issue is the most urgently critical of all these matters as it is the one most inextricably intertwined with the other problems afflicting the Middle East. Iran is supporting the Houthi militias in Yemen; has deep-rooted ties with most of the Sunni and Shiite terrorist groups causing chaos across the region; and has established, financed, and trained sectarian militias which target the interests of other countries—including the United States—whether in Iraq, Lebanon and Syria or further afield. Iran’s regime is already classified by the United Nations as a state sponsor of terrorism, with the UN Security Council imposing sanctions on it in this context. Iran’s regime is also involved in the Palestinian issue, especially through its support for terrorist organizations such as Hamas and Islamic Jihad. Through this support, which is strengthened by continued Israeli intransigence, Iran’s regime contributes to preventing the attainment of a fair and comprehensive solution to the Palestinian question.

Indeed, one of the Iranian regime’s primary objectives in its strategy towards the Arab region revolves around thwarting any effort to resolve the Palestinian question. This obstruction is intended to exploit and weaponize the resulting instability and popular anger as tools to mobilize affiliated organizations, playing on the heartstrings of the public across the Arab and Islamic world and gaining some popular sympathy. Despite that the success of this tactic has dramatically declined following the eruption of the Syrian revolution in 2011 and Iran’s involvement in spilling innocent Syrians’ blood through its limitless support for the Syrian regime, Iran’s efforts continue.

Lobbyists and pressure groups affiliated with Iran’s regime are already noticeably ratcheting up their efforts to win support from President-elect Biden, with a strong insistence on the need for the United States to return to the JCPOA without preconditions before the end of Iranian President Hasan Rouhani’s term in mid-2021. This, they argue, would be the first step before addressing other issues with the next Iranian government. The same supporters of Iran’s regime are also strenuously avoiding any effort to raise the subject of Iran’s missile program and the regime’s hostile behavior in the region.

The justification used by the Iranian regime and its supporters is that that there is an inclination within the Iranian leadership to reject any return to the JCPOA, thereby threatening to pull out of both the deal and the International Atomic Energy Agency’s Additional Protocol completely while increasing their levels of uranium enrichment and rehabilitating the Arak heavy water nuclear facility.

Such justifications are intended to confuse the U.S. position on Iran, in addition to increasing support for Rouhani’s “reformist” government and the political bloc backing it in the domestic political contest between Iranian “reformists” and “hardliners.” It should be noted that any U.S. return to the nuclear deal under an Iranian government whose term is about to end is a bad bet which will leave Washington with little leverage or way to influence Iran’s regime on the nuclear deal, its missile program, or its hostile regional behavior.

The nations and peoples of the Middle East know that dealing with Iran regarding only one issue whilst ignoring the others is a wholly wrong approach. This is why the existing nuclear deal has already proved to be a failure. The Iranian regime’s hostile actions towards the region’s countries increased sharply and immediately following the signing of the JCPOA, with Tehran’s financing of its affiliated militias surging during the period from 2015 to 2017. This reality is completely at odds with the proclaimed key objectives of the nuke deal, which focused on curtailing Iran’s hostile and belligerent behavior by reaching an agreement on its nuclear program.

Accordingly, it is absolutely vital to address the three aforementioned, intertwined issues simultaneously in order to ensure the rest other the Middle Eastern countries will support the negotiations and the agreement. The region’s countries must be consulted and involved throughout the course of addressing these issues and have their representatives present at the negotiations. This will go a long way to ensure the permanence of the agreement and avoid the mistakes made by the Obama administration.

The Gulf states’ concerns regarding the Iranian regime’s behavior are extremely grave, especially when we take into account the lethal Iranian missiles possessed by the Tehran-backed militias, particularly in Yemen, in addition to the attack by Iranian-backed forces on Aramco facilities in Abqaiq and Khurais in Saudi Arabia on September 14, 2019. Military analysts have already called the surprise attack on Aramco the Middle East’s Pearl Harbor attack.

These repeated Iranian provocations have been met with silence from the international community, particularly the major world powers. Allowing these extreme provocations to continue and to go unanswered could well spark a devastating and massively destructive region-wide war, posing a threat to global interests by threatening the global energy supply.

In addition to this, there is a significant increase in Iran’s focus on introducing more drones and guided missiles into its military arsenal. It is a given that the issue of all Iranian missiles, in every category, is considered a priority by many countries, including those in Europe.

These countries have repeatedly expressed concerns about Iran’s continued development of its missile arsenal, especially its ballistic missiles which are capable of carrying nuclear warheads.

In this respect, a spokeswoman for the French Foreign Ministry recently said in a statement to Al-Arabiya that the outbreak of a total inferno across the Middle East would be in nobody’s interests, adding that the scope of the Vienna Agreement should be expanded to include ending the Iranian missile programs.

Dr. Mohammed Al-Sulami is the founder and president of the International Institute for Iranian Studies (Rasanah) based in Riyadh, KSA. He tweets @mohalsulami.