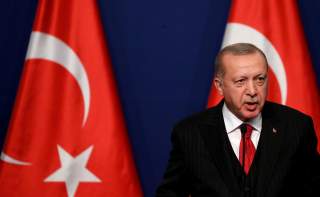 EU-Turkey relations have often been on a rollercoaster over the past few years; but this current juncture has the potential to take relations between Brussels and Ankara to an unprecedented low—and inflict structural damage. The Turkish invasion of northeastern Syria with the operation “Barış Pınarı” (Spring of Peace) against the Syrian Kurdish forces of People’s Protection Units (YPG), which Turkey considers to be the forces of the Kurdistan Workers’ Party (PKK) has triggered several—and severe—criticisms from many European capitals and broader European public opinion.

However, this is not the only issue straining an already tense situation. Brussels and Ankara are at odds over oil exploration in the Eastern Mediterranean. In defiance of the United States and EU, Turkey sent its Yavuz drilling vessel to the coast of southern Cyprus, where Italian and French companies have already been awarded exploration rights. This triggered a sharp increase in tensions and prompted both Washington and Brussels to criticize Turkey for these actions openly—even threatening sanctions.

If these decisions aim to change Turkey’s behavior—including renouncing to its military operation in Syria—then they are very likely to fail. For Turkey, the battle against the PKK is considered more than a strategic goal: it is an ontological issue. These obstacles will not prevent Turkey from moving forward in pursuing this goal.

In October, after a meeting with Turkish President Recep Erdogan, Vice President Mike Pence announced that Turkey agreed to five-day ceasefire to allow the withdrawal of Kurdish forces. For Turkey, this was not a “ceasefire,” as said by Foreign Affairs Secretary Mevlut Cavusoglu, but rather a “break from these operations,” as Turkey got “what it wanted.” Indeed, pushing the YPG forces away from the border and having Turkey controlling the thirty-kilometer strip is what Ankara wanted since the beginning of this offensive. Making this ceasefire “permanent” would de-facto mean to extend the Turkish border by thirty kilometers into the Syrian territory. Once permanent, sanctions will be “removed.” These sanctions were indeed short-lived, as President Trump announced their lifting only a few days later.

For Erdogan, economic sanctions are usually much more worrisome than other types of sanction, particularly from the United States. Yet, with no warranties on having the YPG forces moving away from the border, they too would have not stopped this military operation. Erdogan fears supplementary financial hardship, as it could erode further his support within the country. This element has always been at the core of Erdogan’s concerns. Economic hardship fueled the recent electoral debacle which saw the AKP losing power in Istanbul and across other Turkey’s major cities

However, a very important element to highlight is that, in the joint statement released afterward, the first point clearly stated that “the US understands Turkey’s legitimate security concerns on Turkey’s southern border.” The US conceded something that the Turks historically perceive as crucial in their relations with their formal allies: recognising their security concerns. The EU, instead, has rarely shown this recognition: in Turkey, many accused the EU of double standards, not only for the troubled process for Turkey’s EU membership, but even more so for the EU reaction to the failed coup d’etat in 2016. For many Turks, the Europeans do not understand them, and in many cases, simply do not care about them.

However, this does not mean that the EU should acritically accept Turkey’s perceptions and interests. It merely means that, if the EU sees the Turkish operations in Syria as detrimental to its interests, should act consequentially and exert real pressure - even military, if needed - to actually halt Turkey from moving into Syria. Instead, it became soon clear that the EU did not have a strategy to cope with what was happening in Syria. Almost all European countries immediately called for a halt to future arms exports, but this was more of a declaration on intents rather than a real strategy, and with minimal effect on the ongoing military operation as Turkey was not worried about it. This operation was long in the making and planned well in advance. Halting weapons exports to Turkey mostly serves as a boost for European public opinion, which massively sympathized with the Kurds, and primarily satisfies the rhetoric self-perception of the EU—rarely backed by facts—of being a “normative power.” The evolution of the entire issue merely showed how the EU was exerting very little influence.

However, the EU threat of sanctions and a halt to weapons exports did not stop Turkey’s military action, as this happened only when the US, and Russia, stepped in. Instead, they undermined further the already problematic relationship between the EU and Turkey. For Turkey, the European approach was yet another proof of the lack of understanding that the EU has of Turkey’s security concerns. A sort of lack of geopolitical empathy.

Europeans—and Westerners more generally—tend to underestimate the deep, structural problems around perceptions in Turkey. A generous interpretation by Ankara sees the European opposition to Operation Peace Spring and Turkey’s drilling in the Mediterranean as yet more examples of Europe’s wild misunderstanding of Turkey’s needs. In a more malevolent interpretation, Turkey views Europe, and more generally the West, as intentionally undermining the country. This is a very popular rhetoric leitmotif in Turkey, something that the AKP even exploited in the past for its electoral commercial ads.

Ankara’s perception of Europe’s and the West’s bad intentions is still very much linked to the so-called “Sevres Syndrome.” Named after the Treaty of Sevres of 1920, the treaty that sanctioned the end and partition of the Ottoman Empire, it still powerfully informs Turkish views of the world, and unites parties and politicians across the entire political spectrum, usually with the sole exception of the Kurdish-led, left-wing HDP.

With the one-hundredth anniversary of this treaty approaching, this perception of a Western plot to undermine Turkey might be even more marked. For Erdogan, this perception of an external threat to him and the nation has become even more significant in the aftermath of the failed coup d ‘état in July 2016. Since then, his geopolitical paranoia increased even further. What all of this means: threatening to halt weapons supplies or imposing economic sanctions might make the Europeans feel better about being “on the right side of history,” but it will have little effect in containing and halting this conflict, as well as to make Turkey less assertive. It is not the way to stand its ground in a region in which the United States is no longer interested as in the past, as reiterated by President Donald Trump on several occasions.

When it comes to Turkey, good intentions alone do not translate into positive results. If not backed by concrete actions in those areas in which the EU can instead impose its agenda—should it want it, of course, for instance, by calling the bluff and not accepting the Turkish blackmail on refugees—these statements of good intentions only risk to alienate Turkey, once and for all.

Dario Cristiani is the IAI/GMF Fellow at the German Marshall Fund in Washington DC, working on Italian foreign policy, the Mediterranean and Global Politics in close connection with the Istituto Affari Internazionali (IAI) in Rome. He received his Ph.D. in Middle East & Mediterranean Studies from King’s College London. The views expressed in this article are personal and do not represent those of the German Marshall Fund.