Gulf States Take Varied Responses to the 'Deal of the Century' 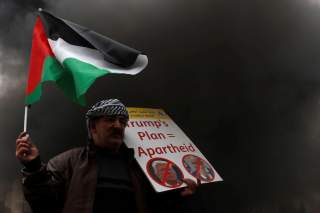 Following President Donald Trump’s presentation of his peace plan on January 28, 2020, many Gulf State officials found themselves speaking out of both sides of their mouths and engaging in mental gymnastics. They have said that they support Trump’s efforts to promote peace between Israelis and Palestinians but they do not appear to endorse the fruits of those labors, which have culminated in a peace plan. While the positions of the Gulf States toward the U.S. peace initiative are not uniform or coordinated, they all reflect efforts to strike a balance between maintaining a good relationship with Washington in order to cope with regional threats while not embracing Washington’s pro-Israel positions, which could expose them to domestic and regional charges of undermining the Palestinian cause.

The Saudi case is perhaps the most interesting among them due to the ostensibly strong interpersonal and bilateral relations that the White House and Riyadh share. These relations have failed to yield a full-throated official endorsement of the U.S. plan. Saudi officials flirted with support for the proposal (after refraining from attending its release) by issuing statements of appreciation for U.S. efforts and encouraging a return to bilateral negotiations. More recently, Saudi foreign minister Adel al-Jubeir noted in vaguely affirmative terms that, “There are positive elements in Trump’s peace plan. These elements may establish the basis for negotiation between the two sides.” One might also infer from the official Saudi response, which mentioned the Arab Peace Initiative as one of several peace plans on the table rather than the single legitimate approach, that perhaps Saudi Arabia has adopted a more pragmatic and flexible approach to resolving the conflict.

However, Riyadh also supported some highly negative collective responses from the Arab and Muslim world, including the declaration by the Arab League Summit in Cairo, which said that its members would not cooperate with the Trump Administration’s plan as it does “not satisfy the minimum” requirements necessary to achieve peace. Likewise, the Organization of Islamic Cooperation convened in Jeddah, Saudi Arabia, and called for its affiliates not to facilitate U.S. efforts to implement the proposal. These gestures followed King Salman’s call to Palestinian Authority President Mahmoud Abbas shortly after the plan’s release reassuring him of the Saudi commitment to the Palestinian cause.

The House of Saud sought to navigate this complex situation by using unofficial channels with implausible deniability as its primary means of conveying support for the “deal of the century.” The Saudi press, which obviously represents the Kingdom’s position, reflected positively on the Trump plan: The chairman of Al-Arabiya who is influential and close to the Royal Court expressed sympathy for the Palestinians but also implored the Palestinian leadership not to squander this opportunity to re-open negotiations with Israel. Another columnist in the Saudi daily ‘Okaz cast aspersions on hardline advocates of the Palestinian cause explaining, “The Palestinians will hear the merchants of the Palestinian cause creating a great uproar, and will discover too late that this uproar is aimed at exploiting them in order to take over and destroy the region.” But the unofficial reaction was not exclusively positive, as Prince Turki bin Faisal Al Saud harshly criticized the proposal to international media outlets.

The other Gulf States offered varying shades of the cautious Saudi approach.

The UAE’s reaction was the most positive in the region, as evident from its representation at the unveiling of the plan as well as the official response following the release. Emirati presence at the January 28 event may have been driven by a variety of factors, including the desire for strong relations with the United States at a moment of instability in the region, lack of historic interest in the conflict, and competition with Oman (also present at the event but largely silent after). While the announcement came from the UAE ambassador in Washington rather than a cabinet-level official, the Emirates declared that the U.S. initiative constitutes a “basis for negotiations” and “an important starting point.”

Qatar took a mirror-image approach to that of Saudi Arabia, in which it officially welcomed the plan with some muted criticisms while using its unofficial state media platforms to attack it. One Doha-based media outlet noted that “since entering the White House, U.S. President Donald Trump has never stopped lavishing gifts on his buddy, the prime minister of the Israeli occupation state, Binyamin Netanyahu.” Another media outlet published a cartoon depicting a roll of toilet paper with the words “Deal of the Century” emblazoned on it, leaving readers with little room for imagination about what Al-watan was suggesting ought to be done with the document.

Although it is true that there are few, if any, examples of unreserved Arab endorsement of the plan, it also significant that there are few outright condemnations by Arab governments of a proposal that is unabashedly more favorable to Israel than any previous U.S. peace plan. Of course, Iran’s clients in Syria, Yemen, Lebanon, and Iraq greeted the plan with their standard hostile rhetoric condemning the usual suspects, but in this case that only underlined their isolation from the vast majority of the region which sought to avoid harming relations with the United States by condemning its latest initiative. In addition, one cannot discount the possibility that some Arab governments view this as a genuine opportunity to jumpstart negotiations to resolve the Israeli-Palestinian conflict after the issue had fallen off the agenda in the post-Arab Spring Middle East.

Overall, the Gulf States’ reactions to Trump’s “deal of the century” should be characterized as cautious—hardly a departure from their usual approach to the Israeli-Palestinian conflict. They appear to have adopted varying strategies. Some of them have been employing tactics of mixed messaging, expressing their views via “unofficial official” media platforms, and communicating through omission in an effort to strike their desired balance and minimize exposure.

The major lesson for Israel is that the Gulf States will find it difficult to cope with Arab and Islamic opposition to a peace proposal that is rejected out of hand by the Palestinians. So, the hope that the Palestinians can be compelled to accept a proposal under threat of being circumvented has limited credibility. One should also expect that the Gulf States will become more hostile toward the Trump administration’s plan should Jerusalem launch unilateral moves, including annexation. This could even lead them to actively participate in steps against Israel.

Dr. Yoel Guzansky is a senior research fellow at the Institute for National Security Studies (INSS) focusing on Gulf security.

Ari Heistein is a research fellow and chief of staff to the director at INSS.