Houthi Haven: Why Iran's Proxy Warriors Have Flourished in the Era of Trump 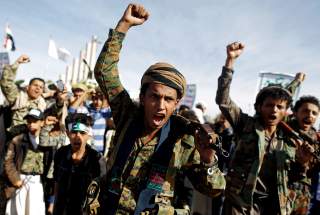 When President Donald Trump pulled out of the Joint Comprehensive Plan of Action (JCPOA) in May 2018 and re-imposed sanctions on Iran, many in the administration believed it would change Iran’s modus operandi in the region. U.S. Secretary of State Michael Pompeo said in November 2018 that “the terror regime [in Iran] continues to fund Houthis launching missiles into Riyadh and Dubai, that’s going to stop. That behavior must change.” The U.S. administration hoped that by limiting Iran’s resources, the regime would be unable to continue its support for groups like the Houthis. In their attempts to stifle these relationships, the Trump administration's maximum pressure campaign has severely damaged Iran’s economy, leading to a reduction in Iran’s defense budget, skyrocketing inflation, and an increase in healthcare costs.

These realities, however, have not affected the Iran-Houthi relationship in ways the administration has intended. The Houthi movement, unlike other groups in the region, was an anti-colonialist group at its inception and did not initially have strong ties with Iran; but as the administration continues to strangle Iran’s economy and add to the country’s already heightened sense of besiegement, the Iran-Houthi bond has grown. As the September 14 attack on Saudi Arabia’s oil facilities hinted, this relationship has gone beyond Iranian opportunism and has morphed into a durable strategic partnership. While the goal of the administration’s maximum pressure policy, among other things, has been to reduce the Iran-Houthi alliance, it has done the exact opposite. This campaign has instead pushed Iran to escalate its support for the Houthis and the United States to accelerate its sanctions regime in response, creating a self-perpetuating cycle with no end in sight.

Labeling the conflict in Yemen as a “proxy war” belies the origins of the Houthis, which unlike Hezbollah, did not rely on Iran’s support from the outset. The Houthi phenomenon was born out of growing encroachment from foreign forces into a traditionally isolated society. Saudi benefactors financed countless Wahhabi madrassas in northern Yemen in an attempt to undermine the Shia-affiliated Zaydi’s, whose strongholds are tucked under the Kingdom’s southern border. For centuries, these areas were under the rule of religious Zaydi Imams, many of whom ensured their territory was isolated from the rest of the world, in an effort to defend against outside aggression. It wasn’t until 1960 that the area would have its first radios.

In the early 1990s, a network of activists named “The Believing Youth” advocated for a reassertion of Zaydi identity at a time when it was increasingly under threat by Saudi influence. Ansar Allah, the official name of the Houthi group, formally materialized in 2003 when the group’s namesake, Hussein al-Houthi, galvanized northern factions against Yemeni president Ali Abdullah Saleh, who quickly saw the Houthis as a challenge to maintaining power in the country. This sparked six successive wars from 2004–2010, known as the Sa’ada Wars, a “rolling conflict” that created the battle-hardened rebel group we know today.

The relationship in the late 2000s and early 2010s was minimal, and at times, contentious. Following the massive protests in early 2011 and the subsequent turnover of power, Yemen’s new government removed fuel subsidies that sparked riots in the Houthi-dominated north, prompting the group’s conquest south in 2014. The Iranians were as surprised as any by the group’s capture of Sana’a in 2015—particularly as Iran had reportedly advised against the move. At the time, Iran was in sensitive nuclear negotiations with the P5+1 and saw the Houthis increasingly aggressive military posture as a threat to any deal that might come out of the talks. Unlike Hezbollah, which in many ways relies on Iran and with whom it shares deep cultural and religious ties, the Houthis have proven to be significantly more independent.

From Associate to Accomplice

Several Trump officials have stated that their main priority concerning Iran is to moderate its regional behavior. From the Iranian perspective, such objectives harken back to the 1979 revolution, which was partially a response to the Shah’s cozy relationship with the United States. Since then, Iranian officials have operated under the notion that the United States and its allies are dedicated to undermining the Islamic Republic. Trump’s maximum pressure campaign has only exacerbated these sentiments and has pushed Iran to double down on its regional policies.

In mid-August 2019, Iran’s Supreme Leader Ayatollah Ali Khamenei met with Houthi representatives and publicly voiced support for the movement, while simultaneously lambasting the Saudi coalition for attempting to “divide” Yemen. The appearance of Houthi representatives in Iran is not uncommon, sticking out on Iran’s streets with ceremonial curved blades at their hips. This was, however, the first time the Supreme Leader met with Houthi officials and made such an overt declaration of support. In essence, Trump’s new raft of sanctions has morphed Iran's years of covert assistance for the Houthis into public overtures of support from Iran’s highest official.

Iran’s growing relationship with the Houthis came to a head following the September 14 missile attacks on Saudi Arabia’s oil infrastructure. A number of scenarios can be posited about which actors were involved and to what degree, each case displaying a greater level of cohesion between Iran and their Yemeni allies. One scenario suggests that Iran conducted the attack from either Iranian soil or elsewhere, with the Houthis only taking credit for strikes. Another posits that the Houthis conducted the strike themselves with greater Iranian financial and technical support. A final potential scenario indicates a coordinated joint operation between the two parties, with strikes coming from Yemen and areas to the north of the Kingdom.

In either of the cases, the Houthis had to consent to accept blame for the attack and agree to incur the predictable costs. According to publically available analysis, the sophistication of the attack was unprecedented, pointing to knowledge sharing and weapons transfers that exceed previous Iranian assistance. Moreover, a joint operation would escalate their military coordination beyond previous levels, requiring integration of weapons systems, tactics, and planning that have never been displayed before.

Regardless of what mix of culpability either party has for the attack, each case displays a level of cooperation beyond their previous relationship. Iran historically has used these relationships to push back on what it perceives as an aggressive, U.S. led strategy to encircle and isolate Iran. Today, Iran is leveraging its strengthening alliance with the Houthis to impose costs on the international community for Trump’s maximum pressure policy

In the wake of the breakdown of negotiations at the UN General Assembly, the administration has imposed a new set of sanctions on Iran’s Central Bank in attempts to stem the flow of funds to Iran’s allies in the region. In continuing these policies, the administration seems to miss the actual effects of their strategy and instead, has doubled-down on a pressure policy that contradicts Trump’s goals and undermines any constructive attempts to stabilize the region.

Shervin Ghaffari is a policy analyst at the National Iranian American Council (NIAC).