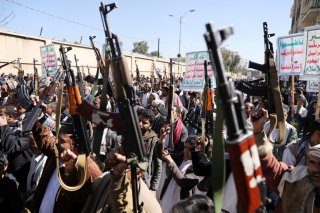 Saudi Arabia proposed a ceasefire agreement to the Iranian-backed Houthi rebels on March 22, seeking to end the six-year-long war in Yemen. The plan was announced by Saudi Foreign Minister Prince Faisal bin Farhan, who proposed that the United Nations should supervise the series of dialogues the cease-fire would entail.

The agreement would allow the main airport in the Yemeni capital, Sanaa, to reopen. The plan would also renew air and sea links in the country, allowing food and fuel imports to flow through Yemen’s central point of entry. Houthi officials immediately criticized the initiative, indicating that it did not go far enough to reverse the air and sea blockade that surrounds northern Yemen. The latest actions by the Houthis strongly suggest that peace with Saudi Arabia and the internationally-recognized Yemeni government is not a priority.

Civil war has plagued Yemen since 2014, when the Iranian-supported Houthi insurgents seized control of Yemen’s capital city. By early 2015, a Saudi-led Gulf coalition began a counter-campaign targeting the insurgents, backed by the United States. The devastating toll this war has taken on Yemen’s population has made the country the world’s worst humanitarian crisis since 2017. According to the UN, the death toll in Yemen exceeds 233,000 and more than 24 million people in Yemen need humanitarian assistance.

Although past rounds of cease-fire discussions between the Houthi rebels and the internationally-recognized government in Yemen have been unsuccessful, the Saudis are hopeful that recent events can play in their favor and motivate some action among Houthi leadership. Since President Joe Biden took office, the United States has reversed the Houthi’s terrorist designation, ended its support for Saudi-led war efforts, and proposed a “recalibration” of relations with Riyadh. In Yemen, Houthis have escalated missile and drone attacks targeting civilian sites and vital energy infrastructure in Saudi Arabia.

Despite the Saudi-proposed peace initiative, Houthi rebels have continued to launch an offensive in the Marib Governorate of Yemen, potentially displacing over 300,000 civilians.  The Houthis’ fervent efforts to claim this last major city in Yemen demonstrate their unwillingness to cooperate with a ceasefire. Tim Lenderking, U.S. Special Envoy to Yemen, announced that “the Houthis are prioritizing a military campaign” at a moment where the international community is pushing for resolution. The United States, Europe and the United Nations all support the Saudi-led peace initiative.

In addition to the Marib offensive, Houthi rebels claimed responsibility for attacks involving eighteen armed drones targeting Saudi military and energy sites on March 26. These attacks not only promptly followed Riyadh’s ceasefire agreement offer, but also coincided with a visit by Special Envoy Lenderking to the region where meeting with Houthi leadership was on the agenda.

While Saudi Arabia hopes to rehabilitate relations with the U.S. government through its ceasefire proposal, Iran is eager to use the Houthis to gain leverage in the expected upcoming U.S.-Tehran nuclear talks. It is not uncommon for Iran to use proxy groups in neighboring countries to advance its own interests. Similar strategies have enabled Iranian-backed militant organizations to function outside of state institutions in Lebanon, Syria, and Iraq. In Yemen, Iran has been able to expand its foothold as the United States has taken steps back from the conflict. Although the ceasefire plan is a step in the right direction, it is unlikely the Houthis will halt their campaigns anytime soon.