How the Abraham Accords Changed the Middle East 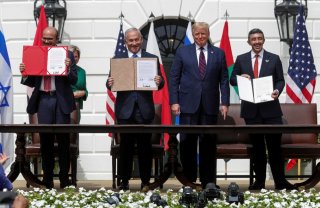 In August 2020, the UAE became the first Arab nation in many years to take the bold step and announce a peace treaty with Israel. September marks the second anniversary of the signing of the first Accords—the groundbreaking normalization agreements between Israel and the Gulf nations of the United Arab Emirates and Bahrain. Treaties between other Arab nations and Israel followed—treaties with a country whose name hadn’t even appeared on maps in the region.

I remember when I first heard the news of the Accords. I have been living in Dubai for most of the past eight and a half years—that was a day of intense emotion. This remarkable country has come a long way since my arrival.

I recalled that just before moving there in early 2014, a long-time colleague in the region told me, “I think it will be best if you don’t tell anyone you’re Jewish.” I knew they felt they were saying this for my own good and were trying to protect me; however, I didn’t know from what exactly. They explained, “Sometimes I overhear conversations, and I just think it would be better for you if others did not know you’re Jewish.”

And so, I packed up and left New York with an expectation that my Jewish heritage would not be at the forefront of my time in the Middle East. I hid my identity for my first few years. Somehow, people found out; this led to a range of awkward, humorous, and unfortunately, sometimes severe and worrisome encounters—as people learned of my identity and had questions, comments, and statements. These encounters happened with a diverse group of people from all over the region, not Emiratis.

Then, the Accords happened—a “miracle in the desert.” Why did it happen? With its long-held commitment to progress, the UAE chose a path of cooperation founded on the nation’s belief in tolerance and acceptance as fundamental to their Islamic faith. The Accords are named for Abraham—the common patriarch of the world’s three major religions: Islam, Christianity, and Judaism.

The amazing point is that religion can serve as a unifier—bringing people of different backgrounds together—not a divider. You would think otherwise if you rely solely on the headlines you read in mainstream and social media.

Here’s a look at what happened at that moment in time and what we’ve learned since.

First, Muslims and Jews can get along. The Abraham Accords differ from the treaties that came before them. “People to people” peace is reinforcing the Accords. This is a mandate to look at what unites us rather than divides us.  It has been successful because the Jewish community now regularly interacts with Muslims and Arabs, and other faith communities. Shared celebrations over the past two years serve as evidence. Interfaith groups have been gathering together to celebrate not only Iftar and Suhoor but also to bake challah (Jewish ceremonial bread) and celebrate the Jewish holidays of Shabbat, Passover, Rosh Hashanah, Hanukkah, and more.

And then there is the recent wedding of Rabbi Levi Duchman and Lea Hadad in Abu Dhabi—perfectly coinciding with the second anniversary of the Accords, with over 1500 people in attendance and Jews and Muslims dancing together, sharing in the celebration.

Second, peace has been incredible for business—trade and tourism between the Abraham Accords countries are up. The Abraham Accords could potentially create up to 4 million new jobs and $1 trillion in new economic activity in its first decade, according to the Rand Foundation

Tourism and services are booming. However, even excluding them, trade between Middle East Arab countries and Israel grew by 234% in the first seven months of 2021 compared to the same period in 2020, according to the Abraham Accords Peace Institute. Trade between the UAE and Israel increased from $50.8 million in the first seven months of 2020 to $613.9 million in 2021.

Contrary to typical rhetoric, faith can be a unifying factor, even among people and cultures of different faiths.I challenge the media to report such stories with greater nuance, less partisan vigor, and more respect for the positive values of faith and spirituality itself.

When I look back at how things have changed since my early days in the UAE, I feel proud to be part of this new era of peace.  We need only to look at what unites us to change the narrative.

Jean Candiotte is an Emmy-nominated writer and producer, and a leader of the Jewish Community of the UAE. She is a contributor to the book Celebrating Tolerance: Religious Diversity in the United Arab Emirates.