How America Has Fought Iran’s Wars in the Middle East 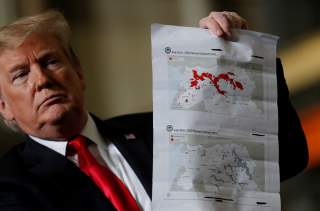 Those in Washington who pushed for a regime change in Tehran through military means are backing away after realizing it would be too costly. Despite Washington’s draconian sanctions, the Mullahs are still standing with no sign of implosion. The American sabre-rattling persuaded the people of Iran to support their unpopular leadership. With the Chinese and Russian backing—China is still buying Iranian oil and Russia warned against American aggression—Ali Khamanei, the Supreme Leader of Iran, is here to stay for the foreseeable future. The irony of all this is, in the last thirty years, America has fought Iran’s wars and mopped up Iran’s enemies, significantly ensuring the survival of the Mullahs. Here is how.

The 1979 Iranian Islamic Revolution allowed the Mullahs to initiate their project; a Muslim world united under Shiism. There is nothing scarier to the Sunni leaders, be it secular or religious, than this. Saddam Hussein was the first to feel the heat. A secular Sunni, Saddam was alarmed that the 1979 Revolution could ignite a similar movement among his Shia subjects, (65 percent of the population), so Saddam initiated a preemptive war. Although the Sunni Gulf regimes and the United States poured weapons and money to their ally, Saddam couldn’t win against Iran. The war ended in a stalemate in 1988, with more than a million lives lost on both sides.

What the Mullahs couldn’t do in eight years, the United States did in 1991. Saddam’s regime was severely crippled in the Gulf War, relieving the Iranian regime of a heavy burden. The United States then meticulously removed Saddam altogether in 2003. And, what else would the Mullahs have wanted from America? The U.S.-led Coalition Provisional Authority (CPA) introduced a sweeping, and indiscriminate de-Baathification process intended to rid the country of Saddam’s Baath party’s influence. Also, President George W. Bush’s dream of “bringing democracy to Iraq” came true. Being the majority, the Shias, and thus Iran, took control of Iraq. Having been purged by the de-Baathification and disenfranchised by the new Shi’a government, Saddam’s former generals and the Sunni rebels formed ISIS/Daesh. David Kilcullen, a former adviser to both Gen. David Petraeus and former Secretary of State Condoleezza Rice, acknowledged in 2016 that “We have to recognize that a lot of the problem is of our own making ... There undeniably would be no ISIS if we had not invaded Iraq.”

At its core, ISIS was anti-Shia, posing a fundamental threat to Iran, its proxy Hezbollah, and the Bashar al-Assad regime in Syria. Hanin Ghaddar of the Washington Institute for Near East Policy notes that ISIS used anti-Shia, anti-Iranian rhetoric to recruit fighters. ISIS killed proportionally far more Shias than other groups, which went left unnoticed. The hatred ISIS harbored for the Shia was so great that massacres it committed against them culminated into a Shia genocide.The embarrassing defeat of the Shia Iraqi military by ISIS in Mosul in 2014 had the Iranians act against the growing threat on their doorstep. Although, Tehran sent the Badr Organization and the Hezbollah Brigades, they were ineffective. The Institute for the Study of War’s Patrick Martin stated that the Iranian militia lacked the ability to recapture and hold urban terrain.

As the ISIS threat grew bigger, once again the United States and the allies came to Iran’s help. Although ISIS never constituted as large a threat for the United States, Washington removed ISIS from Iraq with Operation Inherent Resolve in 2017, providing great relief for Iran, its proxies, and its client, the Assad regime.

Like Saddam, Muammar el-Qaddafi, a secular Sunni, aspired to be the leader of the Arab world, but had troubled relations with Iran. Relations were strained after  Imam Musa Sadr, an Iranian-born leader of Lebanese Shiites, disappeared during a visit to Libya in 1978. In 2008, a Lebanese court indicted Qaddafi and issued an arrest warrant against him for his alleged role in the disappearance. Qaddafi posed a threat for Iran with his pan-Arab, later pan-Islamic, views until he was toppled by the U.S.-led NATO operation in 2011. The then-Iranian foreign ministry spokesman Ramin Mehmanparast said; “The Islamic Republic of Iran welcomes this great victory and congratulates the Muslim Libyan people and the National Transitional Council.” Arguably, Iran had already been involved in Gaddafi’s removal through its proxy Hezbollah. Khaled Kaim, the Libyan deputy foreign minister under Qaddafi, asserted that Hezbollah elements were fighting alongside the rebels east of Libya in 2011, although the group denied the accusation.

Finally, the rise of the Sunni extremist Taliban in late 1990s also posed a threat to the Shia regime in Tehran. Some Iranian Revolutionary Guard commanders reportedly fought alongside the Northern Alliance, the once main anti-Taliban entity in Afghanistan. Javid Ahmad of the Atlantic Council argued that Tehran’s struggle against the Taliban in 1990s was driven by fears the group could potentially influence the secessionist Jundallah, a Sunni militant group that operates inside Iran’s eastern Sistan-Baluchistan province. In 1998, the Taliban ambushed and killed eleven Iranian diplomats in Mazar-i-Sharif, a town in northern Afghanistan.

Iran didn’t have to wait long for revenge. Operation Enduring Freedom dealt a considerable blow to the Taliban. However, the U.S. intervention and the perception of a common adversary would later change the nature of Iran-Taliban relations. After 2001, Iran began to back the Taliban against the United States. In 2017, Sharif Yaftali, chief of general staff of the U.S.-backed Afghan national army, acknowledged that Iran supplied weapons and equipment to the Taliban in western Afghanistan. Mohammed Arif Shah Jehan, then governor of Farah province adjacent to Iran, went further by referencing the “Iranian Taliban.” Today, the Taliban, in part due to Iranian backing, controls more area in Afghanistan that it did before 2001. Finally, as of August 2019, the United States is trying to negotiate with the Taliban in a desperate effort to cut and run from Afghanistan. With the imminent U.S. withdrawal, Iran is poised to fill the vacuum.

More than seven thousand American servicemen have been killed, over 53,000 have been wounded, and more than $5.9 trillion in American taxpayer money has been spent since 2001, only to serve Iraq and Afghanistan to Iran on a silver platter. Eight years on, Washington, looking ever so helpless, is still trying to figure out what to do in Libya and Syria. One thing is certain: the United States has lost big all while producing significant Iranian victories in the Middle East.