How Are China and Pakistan Increasing India’s Kashmir Woes? 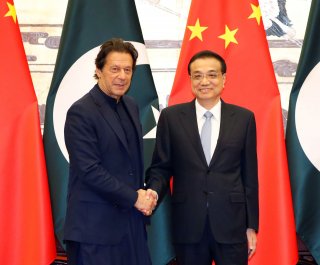 A year after India revoked the special status of Jammu and Kashmir, a portion that Pakistan’s new political map describes as “Indian Illegally Occupied Jammu & Kashmir,” tensions seem to be rising between the two countries, with both capitals exchanging fire on the Line of Control (LoC) and harsh words on the diplomatic front.

In a speech marking the first anniversary of India’s August 5 actions, Pakistani prime minister Imran Khan reiterated and assured that Pakistan will continue to raise its voice for Kashmir. The remarks gave an indication that Islamabad will continue taking a diplomatic route to support the Kashmiris, an approach that it has adopted since August 5, 2019, and one that was exemplified by Pakistan’s aggressive United Nations General Assembly campaign that included Khan’s hard-hitting speech.

Hours after the speech, China, much to the dismay of India, initiated an informal meeting of the United Nations Security Council (UNSC) to discuss the situation in Kashmir. Pakistan, as expected, welcomed the development, given that it was the third such meeting held in less than a year, at the forum that Pakistan pins its hopes on for the resolution of the decades-long dispute. China’s support to Pakistan was not confined to organizing a UNSC huddle, but also extended to the statement in which it termed the Kashmir issue as a dispute between India and Pakistan, while calling a change in status quo as illegal and invalid.

Going forward, China is likely to ramp up its espousal to Pakistan’s stand on Kashmir, something that will make India’s Kashmir predicament more pronounced. There are three reasons as to why China’s support to Pakistan on Kashmir will increase.

Ever since India tinkered with the status of Kashmir, China has turned the heat up on India, with its actions becoming brazen. Last year, New Delhi not only revoked Articles 370 and 35-A, but also bifurcated its administration into two separate Union Territories: Jammu & Kashmir and Ladakh. Beijing strongly protested the conversion of Ladakh into a Union Territory. China asserted that its territorial sovereignty was being undermined by India’s unilateral actions, while stating that such a move was unacceptable and will not come into force. The importance of Ladakh can be gauged from the fact that it continued to establish a connection between India’s unilateral tweaking of Ladakh’s status and an attack on China’s territorial sovereignty. China’s reactions were not confined only to dishing out vehement statements. It was concomitantly expressing its support for Pakistan’s stand on Kashmir.

Also, Beijing adopted a two-pronged approach to deal with its Ladakh troubles. First, it started to push against the LAC as early as September, 2019. Second, it stressed the need for trilateral engagements involving itself, Pakistan, and India, in order to resolve issues and promote regional peace and stability. Fast forward to the Summer of 2020, China and India locked horns in eastern Ladakh, a crisis that turned bloody in mid-June, when at least twenty Indian soldiers, including a colonel, were killed. With Chinese troops still well-entrenched, talks are ongoing between the two countries to end a potentially-dangerous standoff, which could escalate into a major conflict. This implies that China is a major player in Ladakh, and by extension, its stakes in the Kashmir conflict have risen. Also, Beijing’s apprehensions have also increased ever since India’s defense minister, Rajnath Singh vowed to take back Aksai Chin. Thus, given the proximity of the current crisis zone between China and India to Aksai Chin, Beijing is likely to redouble its foothold rather than back down. According to a report authored by a Chinese scholar, China had to act because India "opened up new territory on the map," incorporated part of the areas under the local jurisdiction of Xinjiang and Tibet into its Ladakh union territory. The very report was tweeted by an official posted in the Chinese Embassy in Pakistan. That China has ascribed illegally and infringement of sovereignty to India’s August 5 actions is but an indication that it would not let India off the hook in Kashmir. This is an amplification of the fact that India is likely to face tougher opposition to what it does in and regarding a territory that both Pakistan and China call “occupied.”

The beneficiary of China’s growing concerns and interests in the conflict is Pakistan, as China will certainly lend it much-needed succor in its bid to up the ante against India. In its new political map, Pakistan acknowledges China’s sensitivities by terming the LAC as “frontier undefined” that will be decided by “sovereign authorities concerned after the final settlement of the Jammu & Kashmir dispute.” This indicates that both countries mutually recognize each other’s stands in the region. As India looks to keep Kashmir away from global attention, Pakistan aims to highlight the issue more aggressively. China’s unremitting backing will help Pakistan in that regard.

Beijing’s Interests Across the LoC

One of the points that has featured prominently in India’s discourse against Pakistan since August 5, 2019 is its constant reference to snatching territories from Pakistan. Top military and civilian officials have talked about wrestling back Azad Jammu and Kashmir and Gilgit-Baltistan from Pakistan. While achieving such lofty aims is an untenable proposition, such statements that signal India’s intent can definitely not be brushed aside. Pakistan has categorically stated that it will give a befitting response to India, should it attack territories controlled by Kashmir. India’s inclinations and efforts to up the ante against Pakistan will be impeded not only by the latter’s obvious resistance, but also by China’s growing footprint in both Azad Kashmir and Gilgit-Baltistan. \

Termed as the flagship of China’s Belt and Road Initiative, the China-Pakistan Economic Corridor (CPEC) corridor was reinvigorated by a series of new deals. Beijing and Islamabad signed two deals worth $ 3.9 billion for hydro-power generation projects. What is significant to note is that both hydro-power generation plants, the $ 1.5 billion Dollar Azad Pattan Hydropower Project and the $2.4 billion Dollar Kohala Hydropower Project are located in Azad Kashmir That these projects are part of CPEC, involve Chinese companies, and are situated close to the hot LoC is noteworthy. Moreover, the importance of Gilgit-Baltistan for CPEC and China cannot be emphasized enough. Not only does the region share a border with China, it is also the gateway to CPEC, given that the mighty and strategic Karakorum Highway (KKH) passes through the mountains of Gilgit-Baltistan. Recently, Beijing announced the opening of the stretch of the Friendship Highway, which runs close to India’s westernmost territorial claims.

With projects of such strategic importance opening up, a military conflict between India and Pakistan in Azad Kashmir or Gilgit-Baltistan, for that matter, will directly threaten China’s crown jewel: CPEC. This additional China dimension will have two broad effects on this trilateral landscape involving India, Pakistan, and China. One, Beijing will veritably back Pakistan in a crisis of such magnitude, implying that its crisis diplomacy will be more robust. It's pronounced support for Pakistan will give that country more room for diplomatic maneuvering against India. Thus, India’s ability to shape an intra and post-crisis narrative in the international fora will all but attenuate. In other words, India’s capacity to break free from the shackles in Ladakh by opening up another front against Pakistan, will be challenged.

Other than Beijing’s prominent and expanding imprint in Kashmir, its support to Islamabad will emanate from its commitment to further solidifying ties between the two countries. China standing by Pakistan in the latter’s biggest diplomatic showdown, and that too at a time when it needs international support, is an expression of China’s strong bonds with Pakistan. China has continued to iterate the value Pakistan has in Chinese foreign policy. Timely ratification of Pakistan’s stand on Kashmir will help China ward-off snags that might stem from concerns about the future of Sino-Pak relations or CPEC, for that matter. It must be borne in mind that both countries have been mindful of each other’s principal concerns, especially those that relate to narratives and perceptions. Pakistan has continually avoided speaking on the conditions of Uighur Muslims. China has also vociferously highlighted Pakistan’s successful fight against the scourge of terrorism, while imploring the world to recognize that.

Thus, China would continue to match its voice with that of Pakistan on Kashmir. It is noteworthy that Kashmir is at the heart of Pakistan’s foreign and security policies. Islamabad values those who stand behind it on the Kashmir issue, besides expecting strategic partners and allies to do so. China can arrest negativity and further increase its goodwill, not only at the state-to-state level, but also at the people-to-people level, by helping Pakistan confront India at the global level.

At a time when Pakistan is looking at ways to undermine the Indian narrative regarding Kashmir, China’s outright support is just what the doctor has ordered for Pakistan.

Syed Ali Zia Jaffery is the Associate Editor of Pakistan Politico and Research Associate at the Center for Security, Strategy and Policy Research, University of Lahore. He tweets at @syedalizia1992.