How Coronavirus Could Make the Middle East Even More Dangerous 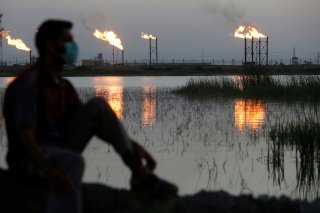 The geopolitical impact of the novel coronavirus pandemic is having ripple effects in countries and regions throughout the world. In the already volatile Middle East, the pandemic is further destabilizing countries and exacerbating conflicts and humanitarian suffering, especially among vast refugee populations displaced by civil war and conflict.

Few will be spared from the virus. As already witnessed from the devastation in Iran, governments and regimes will continue to face significant challenges in dealing with the spread of the coronavirus, leaving health systems overwhelmed and body counts in the hundreds or thousands. Tehran’s main rivals, including Saudi Arabia, Bahrain, and the United Arab Emirates, used the spread of the pandemic, and Iran’s status as a regional epicenter, to blame the regime for its ineptitude. The coronavirus pandemic is likely to increase Sunni discrimination against Shia, particularly in the Sunni majority or Sunni-dominant countries.

And as governments marshal their resources to deal with the pandemic, an obvious beneficiary will be terrorist and insurgent groups operating in countries like Syria, Iraq, and elsewhere. Groups like the Islamic State will seek to capitalize on the drawdown of U.S. and Iraqi troops while exploiting coronavirus for propaganda purposes. There are widespread fears that worsening conditions in detention camps where Islamic State prisoners and their families are held could lead to rioting and eventually prison breaks.

Other terrorist and insurgent groups will also look to benefit from the coronavirus. In Syria, Hayat Tahrir al-Sham (HTS) dispensed advice on how Syrians could stay healthy and avoid the virus. HTS is hoping that its grassroots efforts in northwestern Syria translate to a greater sense of political legitimacy. In Lebanon, Hezbollah has assembled a team of volunteers from the group’s health unit to run medical clinics and coordinate ambulances and emergency response. In the immediate lead up to the pandemic, the government of Lebanon had been hard hit by a financial crisis and countrywide protests, and some estimates suggest that the shutdown costs the country approximately $2.5 billion every month.

Beyond sectarian and security consequences, the humanitarian suffering will be immense. With the Gulf States cash-strapped as a result of the impending realization of a global recession, coupled with sagging energy prices stemming from Saudi Arabia’s reckless oil price war, these countries have less largesse to distribute to patrons and proxies throughout the Middle East and North Africa.

Failed states like Libya and Syria are in imminent danger. Healthcare systems in these countries are already in disarray resulting from civil war. If coronavirus has been a serious threat in places with fully functioning healthcare infrastructures, it can only be expected that its dangers will be magnified in countries where there is no such medical system. In many conflict-affected places, medical equipment and services such as intensive care, access to ventilators and oxygen are lacking entirely. In the northwestern Syrian province of Idlib, where nearly a million people have been forced to flee their home since December, there are only three hospitals with intensive care units. The Assad regime, in concert with the Russian military, has launched attacks that have annihilated any modicum of health infrastructure in the few remaining rebel-held areas.

Yemen is another example. After years of suffering through a Saudi-led bombing campaign deliberately targeting Yemen’s hospitals, the country remains among the most vulnerable in the world. Although no coronavirus case had been reported in Yemen as of early April, the war has crippled Yemen’s ability to respond to handle this pandemic. There is little doubt that in the event of an outbreak, the country will face a humanitarian tragedy. On March 21, Taha al-Mutawakel, health minister for the Houthis’ National Salvation Government, warned that 93 percent of the country’s medical equipment is out of service because of the civil war. Precautionary measures taken by Yemen’s authorities are having a negative effect on a population that has been forced to rely on international assistance. Among these measures is the suspension of flights into the country, and with Yemen relying heavily on imported food, medicines and fuel, these restrictions are likely to take a crippling toll on Yemenis, especially the highly vulnerable demographics in the country. Several aid organizations have been forced to scale back their operations and are struggling to maintain their essential activities. In the first three months of 2020, nearly forty thousand people were displaced in Marib and Al Jawf, forcing them into overcrowded conditions. If humanitarian organizations can no longer provide basic provisions such as soap, clean water and hygiene kits, displacement sites will become breeding grounds for the virus to spread and contaminate populations beyond the displaced communities.

Countries like Lebanon are already overburdened in attempting to deal with the scale of the refugee crisis, with 1.5 million Syrians living in Lebanon. Jordan and Turkey are also home to sizeable Syrian refugee populations. Throughout the region, years of conflict have weakened—in some cases decimated—health systems and medical facilities. The situation is even direr considering that refugees and internally displaced persons tend to have a higher rate of underlying health issues due to the compounding impacts of war, disease and famine. This makes them more susceptible to illness and virus contamination.

If the current outbreak and associated lag effect in Europe and North America is any indication, then it is only a matter of time before w numbers of infection—and inevitably deaths—begin to spike in conflict-affected countries like Yemen, Libya, and Syria. Despite efforts to prepare, the novel coronavirus will likely affect every country in the Middle East. Part of the mitigation measures is to ensure the provision of humanitarian aid to populations in need and the access of aid workers to affected areas. This will be critical in order to avoid an explosion of the virus among populations already scarred by many years of conflict, displacement, and suffering.

Colin P. Clarke is a senior research fellow at The Soufan Center and an assistant professor at Carnegie Mellon University’s Institute for Politics & Strategy.

Hajer Naili is the Media and Communications Manager at The Soufan Center.