How did the Syrian Civil War Become a Proxy War? 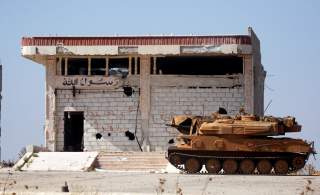 If we were to compare Syria’s condition ten years ago to its current state, one would be shocked at the stark contrast. The idea of how once-bustling souks and ornate mosques became just piles of grey rubble is difficult to comprehend. Civil wars like the one in Syria between the Assad regime and Sunni rebels are destructive, but the intensity of this conflict is unparalleled in the contemporary period, save for the disaster in Yemen.

This is by far the worst war in modern Syrian history with over 550,000 people believed to be dead and twelve million people displaced.

What made this war into the monstrosity that it is today was Syria’s foreign policy, including its relationship with Hezbollah and its animosity for the Muslim Brotherhood. In addition to these factors, the participation of foreign actors was another central issue that allowed for the civil war to develop into today’s highly destructive proxy war. The main international players in the proxy war are Saudi Arabia, who is supporting the Sunni rebels, and Russia and Iran, who are allying with the Assad regime. The United States, Turkey, and Qatar also have varying degrees of involvement in the conflict.

The Syrian Civil War became so vulnerable to foreign interference because of the gradual isolation that Syria faced from the international community beginning shortly after 9/11.

Syria became a pariah state because of its authoritarian policies and its increasing friendliness with radical groups and countries such as Iran. As a result, no other country was willing or able to step in to prevent Saudi Arabia and Iran from resolving their political differences on the Syrian battlefield. Improving the deteriorating relations between Syria and the international community will be an important step in helping Syria move forward after the war.

Syria has always had a controversial foreign policy with Israel and Lebanon, but countries like the United States had been able to see that long-term animosity was not in their favor. However, in 2002, foreign affairs between the United States and Syria quickly began to break down when Syria was added to the United States' Axis of Evil list for its efforts to obtain weapons of mass destruction in the form of chemical and biological weapons. This put Syria on the same level as countries like Cuba, Libya, Iraq, Iran, and North Korea. It also invited U.S. sanctions to prevent the financing of weapons projects, which were expanded in 2010. These sanctions and Syria’s actions to undermine the U.S. effort in Iraq left the United States unwilling to aid the Assad regime in 2011.

In 2005, Syria became isolated not only from the United States, but also from the rest of the international community after the ratification of UN resolution 1559. This resolution called for all foreign troops to leave Lebanon, but it was mainly targeted at Syria after its invasion of Lebanon during the 1975–1990 Civil War. During the Lebanese Civil War, the Maronites requested Syrian assistance in suppressing the rise of a Muslim socialist movement, which Syria agreed would destabilize the region. Syria remained in Lebanon long after the signing of the 1989 Taif Accords that ended Lebanon’s fifteen-year-long civil war. However, following the assassination of Rafik Hariri in 2005, the international community became skeptical of the continued Syrian military presence in Lebanon. Therefore, the UN ratified this resolution as a way to demonstrate the international community’s displeasure with Syrian foreign policy, simultaneously distancing themselves from the country.

Syria’s suspension from the Arab League in 2011 was the final straw in eliminating all of Syria's potential support in preventing the imminent proxy war. The Arab League had repeatedly supported Syria, and despite Syria's controversial alliance with Iran, the Arab League had strongly advocated for their participation in the 2007 Annapolis Conference. However, other Arab League member states wanted Syria to be held responsible for its attacks on protestors by security forces during the Arab Spring.

Without the support of its Arab neighbors, the United States, and the rest of the international community, Syria's only remaining allies included Russia and Iran.

Iran and Syria had been strong allies since they collaborated to repel Iraq during the Iran-Iraq War in the 1980s.

Syria and Russia, on the other hand, have had a much rockier friendship. In 1971, the USSR was able to establish its first military foothold in the Middle East via the construction of a naval base in the Syrian port city of Tartus. However, the USSR did not support U.S.-Syrian collaboration during the First Gulf War, jeopardizing their alliance. In 2005, Russia canceled 73 percent of Syria's debt with Russia to reaffirm their cooperation which encouraged Syria to support the Russian intervention in Georgia in 2008.

Since Russia and Iran both had a long history of a preexisting alliance with Syria, and Syria lacked any other means of assistance, the Assad regime was willing to ally with these two countries despite the threat of a proxy war. Additionally, in light of the immense help that these countries have, in fact, provided to the Assad regime, Syria is still unwilling to refuse the continued support of these countries regardless of the destruction caused by their military involvement and their attempts to negotiate with other countries without Syrian support.

Therefore, Syria should work to rebuild trust with its former partners by rejoining international organizations to garner support for ending the war without becoming further entangled in the conditionality of proxy warfare. Syria has been decimated by conflict, so the sooner the war ends the better. However, without the involvement of several key international actors, the interests of the proxy nations will clash, hindering the ability for the Syrian conflict to be resolved as quickly as needed. Therefore, Syria needs to look to other countries to help end the war through negotiations and by pressuring Saudi Arabia, Iran, and Russia to deescalate their actions in the conflict.

That being said, Syria's first goal should be to try and rejoin the Arab League. Given the Assad regime’s long history of committing human rights abuses, gaining international credibility with the United States or UN seems very challenging, but if Syria could rejoin the Arab League, then they could gain regional partners who want to end the war and invest in reconstructing and stabilizing the region.

The first step to achieving this goal will be improving bilateral relations between Syria and its Arab neighbors, such as the UAE. Bashar al-Assad, who is set to remain in power, has become an international pariah and Saudi Arabia and Qatar, both major powers in the Arab League, have refused to recognize Syria under his control.

Therefore, the Syrian regime needs to work with other Arab countries like the UAE to constructively rebuild Syria in a way that benefits the Arab world at large, eventually convincing the rest of the Arab League that Syria is no longer a regional threat. This is not the end of Syria’s efforts to restore its international credibility, but it would be a strong first step that could enable willingness on the part of other countries to negotiate.

Olivia Giles is a former intern for the Middle East Studies Program at the Center for the National Interest. She is a senior at Bowdoin College in Brunswick, Maine where she is majoring in Government and Legal Studies with a concentration in comparative politics in the Middle East and Africa.