How Donald Trump Can Max-Out 'Maximum Pressure' on Iran 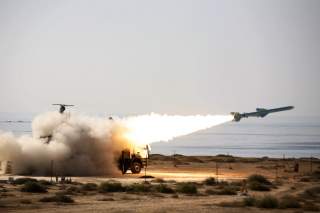 It has now been over a year since the Trump administration began its “maximum pressure” campaign against Iran, and almost two years since Secretary of State Mike Pompeo laid out 12 demands upon the Iranian regime to change its behavior.

For Iran, the “maximum pressure” campaign has been devastating. The economy is in recession, inflation is on the upswing, and the Iranian rial is increasingly worthless. The largest Iranian banknote—100,000 rials—is worth just $2.50 at official rates, and less on the street rates Iranians actually use. In order to bypass the psychological fear of hyperinflation, the regime now circulates “bank checks” worth up to one million rials.

As foreign policy and defense have become political footballs, there is growing partisan backlash against Trump’s Iran policy in Congress. Those who say ‘maximum pressure’ can never work, however, ignore history. As the late Peter Rodman pointed out in a 1981 Washington Quarterly article, maximum pressure forced Iran to reverse course on its demands for U.S. hostages seized at the embassy in 1979, and eventually release them on the first day of the Reagan presidency. Then, in 1988, revolutionary leader Ayatollah Khomeini reversed course under the tremendous strain of Iran’s economic isolation to accept a ceasefire in the Iran-Iraq War that he had first been offered six years earlier.

The major faults of the “maximum pressure” campaign are both that it lacks any strategy to fracture the Islamic Revolutionary Guard Corps (IRGC) and it remains incomplete. While the U.S. government primarily considers the IRGC a terrorist entity challenging U.S. forces abroad and targeting U.S. allies across the Middle East, its major focus has actually been internal since 2007 when then-IRGC chief Mohammad Ali Jafari argued that the Iranian public rather than U.S. forces posed the primary threat to the regime.  He was right, of course. It’s wishful thinking to believe muddle-through reform can work or regime change can occur when the IRGC remains united and strong. If Secretary of State Mike Pompeo and Iran coordinator Brian Hook wanted to accelerate their strategy, there are many soft strategies they could employ to exacerbate fissures within the IRGC in order to turn the group upon itself.

Within the maximum pressure campaign, however, many sanctions loopholes also remain. Fortunately, it is possible to address these in a manner that would pressure the Iranian regime without harming the Iranian people, the majority of whom chafe under the clerical regime. U.S. sanctions have bit so hard on the IRGC and the perhaps 40 percent of the Iranian economy which it dominates, that Iraqi Shi’ite militias now subsidize the IRGC rather than vice versa. While the State and Treasury Departments have slapped sanctions on some of the Iranian-backed militias for terrorism and human rights violations, they have done little to identify the militia business interests in Iraq which now subsidize Iran’s malign activities.

Within Iran’s borders as well, the clerical regime is investing in industries that augment Iran’s military abilities but remain largely ignored in Washington. For example, Iranian engineers have been working for more than a decade on nanotechnology and, increasingly appear to be making significant strides. Saeed Sarkar, secretary of the Islamic Republic’s nanotechnology headquarters, recently reported that there are now 610 products related to nanotechnology in the domestic market, and that 15 separate Iranian industries use nano-tech, including the pharmaceutical, construction, textiles, automotive, oil, gas, petrochemicals and home appliance sectors. Sarkar also claimed that Iran has successfully exported nano-tech to 45 countries. China actively helps the Iranian industry. Iranian work on carbon fibers, meanwhile, has enabled the Islamic Republic to build lighter and more advanced unmanned aerial vehicles and perhaps more advanced centrifuges as well.

More recently, the Iranian government has launched efforts to extract rare earth elements—the 15 lanthanides on the Periodic Table of Elements as well as scandium and yttrium—many of which have unique industrial applications as catalysts, magnets, and in the petroleum industry. If the Iranian government is successful, not only can they save increasingly scarce hard currency, but also advance their own industrial capacity to better counter the impact of sanctions.

U.S. concern about the Islamic Republic’s nuclear ambitions and its ballistic missile work may be the stuff of headlines, but Iran’s industry is broader, and the applications from other high-technology sectors can also augment Iran’s programs. It would be a mistake to ignore niche Iranian industries today, because they form the basis of asymmetric capabilities which the Iranian leadership will not hesitate to deploy or export tomorrow. It is time to undermine the building blocks of Iran’s next-generation military-industrial ambition.