How Donald Trump Can Stop Iran's Missile and Nuclear Plans 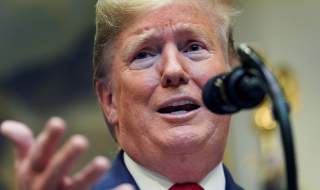 France, Germany, and Britain are supporting the ineffectual and dangerous nuclear deal (the JCPOA) with Iran. Contrary to the assumptions made by these states, the deal doesn’t stop Iran’s nuclear ambitions. It actually is a glide path to Iran building nuclear weapons because all the weak limits in the deal expire. Moreover, the Iranians have not come clean on their previous nuclear weapons work, as required by the JCPOA, and of grave concern is the Israeli discovery of major Iranian nuclear work undertaken as early as 2003. Iran’s nuclear ambitions are not just of interest to the Middle East region. The Iranians are building ballistic missiles with ranges of thousands of kilometers which thus puts Europe under threat.

This is transparent to all states, clearly including France, Germany and the UK. Thus, it is reasonable to explore the three reasons why they persist in giving Iran the benefit of the doubt in assuming Iran will abide by the JCPOA and why they believe that a nuclear deal will prevent Iran from securing nuclear weapons—even after its provisions expire this decade.

First, these nations want to do business with oil and gas-rich Iran and to do so they have to get around American banking sanctions. Second, they believe somehow the United States government will determine that Iran cannot build nuclear weapons under the JCPOA and that a new deal is not needed. Third, with the JCPOA given new life, U.S. banking sanctions against Iran would be lifted, allowing France, Germany, and the UK could trade and invest with Iran. At least that’s the hope from Paris, Berlin, and London.

Yet, even that scenario is on the rocks. Despite the visit to Tehran by the EU’s foreign policy chief, Iran is not budging. It wants all U.S. sanctions removed first. Only then it will purportedly comply with the ineffectual JCPOA.

Even the Europeans will not accept this outcome. In fact, the three European parties to the deal have filed a motion to reimpose UN sanctions unless Iran goes back into compliance with the JCPOA.

Moreover, British prime minister Boris Johnson has supported a completely new “Trump deal,” which would jettison the JCPOA and start over. Augmenting this, the Trump administration has also reasonably called for a new deal and, where there is no expiration of anti-nuclear provisions, an end to threatening Iranian ballistic missile developments. Additionally, it wants to deny Iran the automatic “right to enrich.”

Despite those positive developments, unless there is at a minimum a new nuclear deal along these lines, the danger of a nuclear Iran remains a deadly threat.  Appeasing the mullahs in Iran will not keep anyone safe from IRGC terror but only encourage it. While the United States and Israel have an interest in preventing a nuclear Iran from emerging, they will not lend their support for a fraudulent deal that, at best, simply modestly delays but does not end the reality of a nuclear-armed Iran.

Many in the U.S. Congress who opposed the JCPOA because they recognized that support the existing JCPOA will ultimately allow Iran to build ICBMs with nuclear warheads—perhaps not today but on some tomorrow. The heads of state of Britain, France and Germany should comprehend this as well.

While domestic politics may lead these European leaders cynically to kick the Iranian nuclear can down the road in the misguided hope that some future leader will have to wrestle with a nuclear-armed Iran, that is a perilous path for the rest of the world.

While the United States and Israel are dedicated to stopping Iran from becoming a nuclear-armed terrorist nation, they will not fall for the EU’s nuclear gambit. If the EU’s plan were to reach fruition, then U.S. sanctions on EU companies that trade with Iran would be a lamentable consequence for these enterprises. To address the Iranian threat, a strong U.S. regional deterrent, which includes missile defenses and counter-proliferation policies, is the policy plan of the United States and one which Europe should join. Expectations of wealth from trade with Iran must be subordinate to the strategic need for a united front against Iranian proliferation and Iran’s regional hegemonic ambitions in the Middle East.

Peter Huessy is Founder and President of Geo-Strategic Analysis of Potomac, Maryland.  Bradley A. Thayer is Professor of Political Science at the University of Texas in San Antonio and is the co-author of How China Sees the World: Han-Centrism and the Balance of Power in International Politics