How India Brought the Saudi-Turkish Rivalry to Kashmir 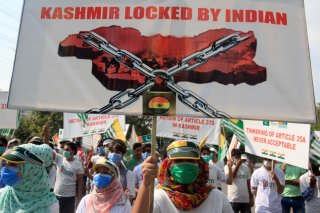 After the abrogation of the Indian constitution’s Article 370 regarding Kashmir’s quasi-autonomous status, Turkey has emerged as the most potent international player in the Kashmir conflict, supplanting foreign players like Iranians and Saudis. Turkey’s penetration in Kashmir is not only alarming for India’s national security but also because of Turkey’s larger geopolitical motivations and repercussions.

From 2014 onwards, Saudi Arabia disappointed Kashmiris as India-Saudi relations improved under Prime Minister Narendra Modi’s government, but Turkey claimed the space ceded by the Saudi. Turkish President Recep Tayyip Erdoğan emerged as an ardent supporter of Kashmiri sentiments and rights along with Pakistan’s Imran Khan. Turkey supported Pakistan in all the diplomatic forums such as the UN General Assembly, UN Human Rights Council, and the Financial Action Task Force.

Erdoğan, in his speech at the 74th session of the United Nations General Assembly, declared, “Kashmir is still besieged, and eight million people are stuck in Kashmir.” On its sidelines, Erdogan elaborated. The “world should know the sufferings of Kashmir,” he said, drawing parallels between Kashmir and Palestine by calling Kashmir an open-air prison. Thousands of Pakistanis and Turks flooded social media with messages thanking him, and #OurVoiceErdogan became the top trending hashtag on Twitter, garnering nearly 300,000 tweets within a few hours. In a subsequent speech to a joint session of Pakistan’s parliament, Erdoğan said Kashmir is as important to Turkey as it is to Pakistan. “It was Gallipoli yesterday, it is Kashmir today, and there is no difference,” he declared.

In contrast, the Saudis and much of the Arab World stayed neutral and refrained from criticizing India. Saudi Arabia’s worsening ties with Pakistan and Arab states’ recognition of Israel also led Kashmiris to promote Turkey at the expense of Arab states. While banned terrorist and extremist groups like Jamaat-e-Islami revive the Salafi Ahl-i-Hadith and operate with complete freedom. This in turn has further tarnished the Saudi’s image in Kashmiri minds.

Turkey’s Kashmir strategy is multipronged. An aggressive information warfare campaign condemns India as a fascist and Hindu nationalist country ill-treating its minorities. Simultaneously, Turkey pumps in money through NGO channels, offers Kashmiris investment opportunities, establishes links to not only politicians, but also to separatists and extremists organizations, and makes use of soft-power tools like TV dramas such as the historical fiction adventure series Diriliş: Ertuğrul [“Resurrection”]. Kashmiri youth now wear Ertuğrul-styled caps, Bukhari heating devices have become fashionable, and some people have even named newborn babies after the Turkish character. TRT World, Turkey’s official broadcasting arm, has given extensive coverage to Kashmir’s security and communication lockdown. Though the coverage is propagandistic with a distinct anti-India tone, it makes a strong emotional appeal to the ordinary people who face a massive presence of Indian soldiers, curfews, rigorous security checks, and occasional media and social media restrictions. Turkey’s videos about Kashmir have proliferated. TRT World employs Kashmiri journalists, and offers scholarships to study medicine, engineering, international relations, and human rights in Turkey’s universities. All this coincides with the repeal of Kashmir’s special status and a lockdown that the local populace saw as an affront to Muslim pride. In essence, Erdoğan has positioned himself a messiah, with Kashmiri people seeing him as a new caliph willing to lead them against the infidels.

Turkey has also made a deep-rooted connection with Jamaat-e-Islami leadership and regularly invited Muslim clerics to discuss Kashmir and Islamic issues in South Asia. The Turkish think tank GASAM has produced vast literature on South Asia. Their analysts present the Kashmir issue as a colonial occupation and brutal suppression of human rights by India’s Hindu-nationalist government. In operational matters, Turkey is likely to help Pakistan with its state-of-the-art drone technology. As per Indian intelligence sources, Pakistan will use surveillance drones to help terrorists infiltrate.

Further, in the event of a military escalation between India and Pakistan, Turkish drones, already used to great effect in Idlib and Nagorno-Karabakh, can challenge Indian forces. Further, Greek media has claimed that SADAT, Turkey’s private paramilitary force, is likely to become active in Kashmir. SADAT is notorious for training jihadists and organizers of social unrest in Libya and Syria.

Erdoğan’s Kashmir outreach is rooted in his outreach to South Asian Muslims. Realizing that his claims to lead the Muslim World will meet stiff resistance from the Arab nations, he is reaching out to non-Arab Muslims. South Asia is home to the largest non-Arab Muslim population with historical and cultural ties with Turkey’s Ottoman rulers.

Turkey’s outreach to Kashmir will have profound geopolitical repercussions. Suffice to say, India’s abrogation of Article 370 has catapulted Kashmir into the global diplomatic and intelligence theater. It is now a battlefield for a proxy fight between a more moderate Saudi-led Arab bloc on one side and a more radical, Turkey-Iran-Pakistan-Malaysia bloc on the other side. It also risks transforming into a theater for great power rivalry, an annex to the battle for influence that now engulfs Afghanistan.