How Joe Biden Can Learn from His Prior Mistakes in Iraq 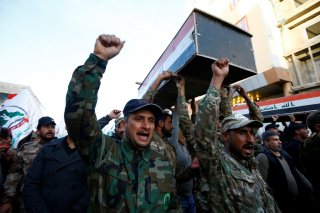 A commander in Iran’s Islamic Revolutionary Guard Corps (IRGC) was killed by an airstrike along the Iraq-Syria border sometime between November 28 and November 29, according to Iraqi security officials. The commander, whose name has yet to be released, was traveling with three other individuals in a vehicle that was reportedly transferring weapons across the border into Syria. This airstrike closely followed the ambush and killing of top Iranian nuclear scientist Mohsen Fakhrizadeh on November 27. Tehran immediately accused Israel of being the impetus behind these attacks, although the state has not presented any evidence confirming this allegation.

Additionally, on November 29 the Islamic State claimed responsibility for a rocket attack targeting a small oil refinery in northern Iraq. Two Katyusha rockets hit the refinery, igniting a fire that led to the closing of its operations for the rest of the day. Earlier in November, the Islamic State claimed responsibility for two separate attacks in Iraqi’s eastern Diyala governorate that killed four people. Recent attacks signal that ISIS militants remain viable and will likely continue to cast attacks against security forces in Iraq.

Similar attacks are expected to unfold as regional players anticipate a Joe Biden presidency that could result in a major shift in U.S. Middle East policy. In the last decade, Israeli forces have carried out assassinations against various Iranian targets involved in nuclear proliferation. In 2014, the Obama administration pressured Israel to halt assassinations in Iran as negotiations to bring about a nuclear deal ensued. Since Biden likely would rejoin the nuclear treaty (the Joint Comprehensive Plan of Action or JCPOA) with the Iranian regime that President Donald Trump withdrew from in 2018, Israeli officials fear a bolstered Iranian proliferation program.

In January 2020, Iranian Maj. Gen. Qassem Soleimani was killed in a U.S. drone strike in Baghdad. In retaliation, the Iranian regime engaged in consistent attacks against U.S. military and diplomatic sites on the ground in Iraq. Iran exerts influence through its active and militant proxies known as the Popular Mobilization Units (PMU). Iranian-backed PMU offshoots initially functioned to counter the rise of ISIS in Iraq. However, splinter units of these militias have taken on a new role in Iraq—to exert Iranian malign influence in every sphere of the country.

Joe Biden played a direct role in the proliferation of PMU forces in Iraq during his tenure as Vice President. In 2009, Biden and the Obama administration decided to back then-Prime Minister Nouri al-Maliki’s bid to retain power in a standoff against Iraqiyya, a moderate political party challenging the prime minister’s incumbency at the time. The administration’s pro-Maliki stance coincided with the process of negotiating the JCPOA. Some experts argue that Biden gave into Iranian interests by fully backing a government Tehran regime favored.

In 2011, as Iraq was beginning to stabilize, Biden oversaw the curtailment of the remaining 150,000 U.S. troops in Iraq. The creation of this power vacuum, coupled with the degradation of security forces at the hands of Iraqi’s authoritarian prime minister, led to a chaotic aftermath that would engulf Iraq.

Maliki, the Biden-supported prime minister, was a detriment to the Iraqi security forces and his policies contributed to the rise of ISIS in Iraq. In 2014, Maliki disbanded the “Sons of Iraq,” a Sunni group who battled Al-Qaeda alongside the U.S. for years. Lacking U.S. collaboration and the experience of the Sons of Iraq, counter-ISIS operations on the ground were forced to depend on Iranian-backed militias—the PMU.

Today, the PMU poses the largest challenge to Iraq’s sovereignty. As Biden considers his Middle East policy team, he should aim to reverse some of the lingering damage his legacy as vice president helped to create. Biden should extend the Trump administration’s support of Iraq’s newly instated prime minister, Mustafa al-Kadhimi, in his efforts to curtail Iranian militias and its influence in Iraqi affairs.