How Russia Plans to Get Turkey on Its Side 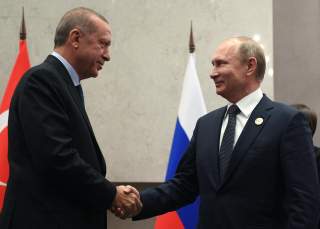 June has been a tough month for the board of Akkuyu Nuclear Power Plant (NPP), the joint Turco-Russian megaproject and Turkey’s first nuclear reactor. On June 19, Russian authorities arrested on charges of espionage Karina Tsurkan, an energy executive at Moscow-based Inter RAO and former board member of Akkuyu.

Two days later, on June 21, a Turkish journalist using leaked documents from the same law firm that generated the Panama Papers, exposed a $15 million deal involving alleged conflicts of interests between Turkish construction tycoon Mehmet Cengiz and an offshore consulting firm based in the British Virgin Islands. The head of the consulting firm, Russian-Azeri Fuad Akhundov, was the former CEO of Akkuyu and a board member until February 2018. Cengiz was one of the bidders for an ownership stake in Akkuyu in a deal that fell apart last year.

As tensions between Russia and the West mount, Russia’s courtship of Turkey has caused concern on both sides of the Atlantic. Indeed, on July 8, U.S. ambassador to NATO Kay Bailey Hutchison stated that Russia is trying to ‘flip’ Turkey through the sale of the S-400 air defense system and energy deals.

While these state-to-state deals are certainly significant, they tend to overshadow a quieter, but equally important Russian campaign to “flip” Turkey’s influential business community. Akkuyu NPP, and the scandals of its board, shed light on Russian attempts to gain leverage over Erdogan and his advisors through the local private sector, in what appears to be a gradual building of hybrid warfare capacity against a key NATO ally.

The term hybrid warfare has become a catch-all for Russia’s exploitation of economic, political, financial, covert, and military resources to achieve desired foreign policy outcomes in the former Soviet Union and the West. Moscow utilizes economic resources and Russian companies to exert influence on key power-brokers in the target country, often lobbying to maintain or increase the country’s dependence on Russian energy at the state level. In the Kremlin’s playbook, Russian firms co-opt local businesspeople and decision makers via lucrative business deals and high-profile board positions—all via nontransparent, frequently corrupt processes.

In Turkey—which has fought many wars with Russia over the last two centuries—one would expect the public to have a natural distrust of Russia and potential Russian influence in politics. The Kremlin, therefore, has worked hard to gain influence, not only through carefully crafted propaganda, but also through business-to-business contacts undertaken by firms such as Rosatom, the owner of Akkuyu NPP. Their efforts appear to be paying off, as a 2017 poll showed that over 70 percent of Turkish citizens were favorable toward a political, economic and security alliance with Russia.

Akkuyu is one of Turkish president Recep Tayyip Erdogan’s pet megaprojects and cited in the media as a key confidence builder in Turco-Russian relations. The $20 billion project will be Turkey’s first nuclear reactor, expected to supply the country with 10 percent of its energy needs.

As part of the joint agreement, Russian nuclear energy company Rosatom provided the financing for Akkuyu in exchange for 51 percent ownership. Critics of the project argue that Turkey should be looking to diversify its energy needs from Russia, not double down. Russia is already the largest supplier of natural gas and the third largest supplier of oil to Turkey.

Behind the scenes, the sensitivity of the Akkuyu project would have certainly required Russian government approval for board appointees, and we can assume that Moscow wanted people on the board who understood the political implications of the economic project. As the espionage case against Tsurkan progresses, the emerging details of her past shed light on Russia’s motives for appointing her to the Akkuyu board. In fact, Tsurkan’s resume hits all the geographic hotspots where the Kremlin playbook was written. Her case shows that in the murky world of energy politics, business executives can act as proxies for diplomats, engaging in activities official channels would prefer to stay out of.

Karina Tsurkan, a lawyer by training, had reported links to Dubossarskaya GES, an energy company in the Pridnestrovian Moldovan Republic (Transnistria), which broke away from Moldova in 1992 and has since remained de-facto independent—albeit effectively under Russian control with a heavy presence of Russian “peacekeepers.” Russian electricity giant Inter RAO bought Dubossarskaya GES in 2005, which still supplies 70 percent of Moldova’s electricity needs, creating significant leverage for Transnistria over Chisinau. Inter RAO appears to have hired Tsurkan during the company’s entry into the Moldovan market, and she steadily rose through the ranks before she was ultimately fired nine days after her arrest from her post as “Board Member – Head of the Trading Block.”

In addition to Moldova, her portfolio included Russian-annexed Crimea and the Republic of Donbass, a puppet state the Kremlin has carved out of occupied territory in eastern Ukraine. In Crimea and the Donbass, just like in Transnistria, the supply of electricity is an effective weapon, and separatist proxies and their patrons can hold Ukrainian and Moldovan citizens hostage in the depths of winter with the flip of a switch. It is no wonder then, that NATO and Romanian intelligence would be interested in information she had.

Tsurkan was replaced on Akkuyu’s board with Erdogan’s confidant, former senior advisor, and all around fixer, Hasan Cuneyd Zapsu. Both Zapsu and construction tycoon Cengiz, who we now know attempted to retain consulting services from the former CEO of Akkuyu NPP while trying to become a project partner, are very close to Erdogan. Both men offer Moscow effective channels of access to Turkey’s one-man ruler. More importantly, it is likely that given the sums and contracts at stake, the involvement of Erdogan’s inner circle in energy projects with Russia might create a “virtuous cycle” for Russia’s hybrid warfare strategy.

From increasing Turkey’s energy exposure to Russia to putting Erdogan confidants in their pocket, it seems that in Akkuyu the Kremlin got two for the price of one. And against a backdrop of growing calls in Washington for potential sanctions on Turkey for the procurement of the Russian-built S-400 air defense system, such leverage might be worth more than ever.

Aykan Erdemir is a former member of the Turkish parliament and a senior fellow at the Foundation for Defense of Democracies, where John A. Lechner is an intern.