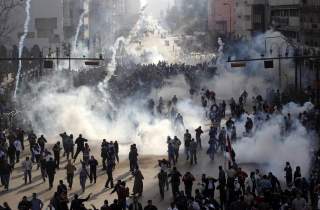 Social media has played an increasingly important role in Middle East politics ever since the 2011 Arab Spring. State actors such as Iran and Saudi Arabia have sought to use social media to influence discourse at home and undermine rivals abroad. How will this new era of online opposition and internet troll armies play out?

As ongoing wars in Syria and Yemen have dominated news from the Middle East in recent years, international public opinion has taken on a new level of importance for regional actors involved in these conflicts. Social media is among the principal influencers of this public opinion. It is a tool that has radically transformed worldwide communications and the way in which our societies share information and ideas. A November 16 discussion at the Center for the National Interest examined “information wars” for public opinion that have played out online in parallel to the numerous conflicts being waged across the region. Moderated by Gilman Barndollar, the director of Middle East Studies at the Center for the National Interest, the discussion featured Khalid Al-Jaber, director of the MENA Institute and a visiting assistant professor at Qatar University and Northwestern University in Doha, and Niki Akhavan, professor and chairman of the Media Studies Department at Catholic University of America.

Managing social media is a balancing act for the authoritarian (or semi-authoritarian) regimes in the Middle East, which have sought to control and shield domestic online discourse from external influences, while seeking to use social media to sway international public opinion. Take for example, the experience of Iran. As Akhavan explains “[Iran] has always had this contradictory position in relation to established media and emerging media. It has always expressed concerns from the outset that these media can be used as a form of cultural invasion from abroad, from Iran’s enemies . . . But it has also always recognized the power of media to push forward its own agenda.”

Social media initially brought hope to the Middle East. The Arab Spring, brought about in part by online discourse and organization, created a new openness that allowed for criticism of autocratic governments that were previously uncountable to public opinion. As Khalid Al-Jaber noted, “it was a different platform and the government could not tightly control it the way they do with other media.” But it was not long before the emergence of critical voices on social media sparked a government “counterrevolution,” per Al-Jaber. Today, he argued, governments across the region increasingly dominate social media platforms, using troll armies to influence public debates.

Governments are likewise using social media to rally domestic and foreign support for their policies. Iran has portrayed its intervention in Syria as necessary to counter terrorism and extremism. In contrast, Iran has largely avoided focusing on its own involvement in Yemen, instead highlighting the conflict as a humanitarian disaster precipitated by its rival Saudi Arabia. According to Akhavan, this is necessary because even in Iranian cyberspace the Assad regime has a brutal reputation, so the state frames its intervention as an anti-terror effort rather than a pro-Assad campaign. Iranian state-backed social media reflects this, focusing on the threat of terrorism, regularly featuring violent images of ISIS fighters, martyred soldiers killed by extremists, and official images of Iranian leaders intended to give an air of strength and stability. By contrast, the media surrounding involvement in Yemen, however, has remained focused on the role of Saudi Arabia (and that of the United States indirectly) in perpetuating a humanitarian crisis within the impoverished nation. There appears to be a consensus across the Iranian political spectrum that the war in Yemen is morally reprehensible and that Saudi Arabia’s role in the conflict has served only to exacerbate human suffering. By employing gruesome images, Akhavan said, Iran is using online media to present its perspective on the conflicts in Syria and Yemen. Tehran approaches the two wars differently, however.

Akhavan also discussed the unintended consequences of U.S. government rhetoric in the region. She notes that the United States has sought to leverage Iranian feminist movements to undermine the regime. Although American support for certain causes might seemingly help these movements, “whenever there is a statement from official sources in the U.S. claiming solidarity, it’s like a kiss of death for [feminist movements in Iran] because then they can get marked as working with or hand in hand or in the interests of the U.S.,” she said.

In regards to the recent “Global Magnitsky” sanctions placed on key Saudi figures including those who control aspects of internet monitoring, Al-Jaber does not think that any one person controls the information online. Rather, he explains that there are large organizations managing social media to the point where it “has become the government’s tool,” meaning one of the only ways that for citizens to demand reform is gone. Iran has likewise put a lot of resources into “troll armies” and getting its messaging out, adds Akhavan. The investment has paid off in the case of Syria, which is where Tehran has been able to muddy the waters enough so that citizens question the opposition as much as they do the Assad regime. However, Iran’s opposition does include some media-savvy members who seek to expose online surveillance. Al-Jaber notes that news outlets like Al-Jazeera played a crucial role in the Arab Spring by shedding light on corrupt governments. Nevertheless, governments have struggled to replicate Al Jazeera’s success in their own state-controlled outlets.

The control of public discourse in the Middle East is also an imperfect tool. For example, Iran’s internet speeds are kept artificially low, and authorities do filter and try to ban things, but their efforts wax and wane depending on current trends and the political climate. Resourceful citizens continue to circumvent censorship with Virtual Private Networks (VPNs), connections that allow for encrypted activity online. For most people, censorship and internet controls are an inconvenience, and they are not completely effective.

Both Akhavan and Al-Jaber agree that disconnects often emerge between the messaging directed at citizens and what is portrayed to audiences abroad. Setbacks from foreign sanctions and competition from rivals like BBC have adversely affected state-run broadcasting in Iran (IRIB), a key player in propagating messaging to the Iranian people. Online, a disconnect between foreign and domestic rhetoric is clearly seen as well. While online trolls do not actively disrupt discourse, they do create echo chambers and dissuade others from contributing differing opinions in online fora. To counter these de facto limits on free speech, Al-Jaber argues that Facebook, Twitter, and other platforms must do more to counter online trolls. Akhavan, however, notes that blocking users is not an ideal solution because criteria is for who and what to block are sometimes arbitrary, creating limits on open public discussion.