How to Tame Iran and Win a Nuclear Deal 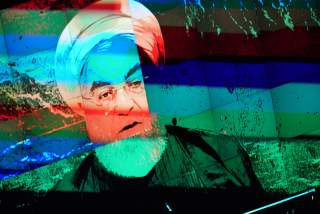 For some time now there have been serious questions about the kind of preparations that are being made in the U.S. administration ahead of a possible negotiation with Iran on the nuclear file. Lately, there are growing indications that even if preparations are underway in the White House or State Department, President Donald Trump seems to view himself as capable of solving the problem on his own, even in a single meeting with Iran’s president Hassan Rohani. References by the president to North Korea raise concern that he is viewing both negotiations in a similar fashion, which could have very negative implications for dealing with Iran.

First of all, in contrast to the many analysts that have already pronounced Trump’s maximum pressure campaign a failure, this is not the case. The very fact that there is talk of a possible negotiation is the result of the pressure campaign. If the Trump administration had not changed course on Iran, then the dominant message would be that Iran is upholding the deal and all is well. It is only because of the steps taken by the United States in the past two and a half years that other powers have been forced to admit that there are flaws in the deal that need to be addressed. Lately, the Europeans took a step closer to the U.S. approach: they placed the blame for the mid-September attack on the oil facilities in Saudi Arabia squarely on Iran, and in their statement, they urged Iran to address troubling issues in the nuclear and missile realms and with regard to its regional activities. The UK’s new prime minister, Boris Johnson, went so far as to say the JCPOA is a bad deal, and a new deal must be negotiated. Moreover, as long as the process is ongoing, any determination of failure at this point is clearly premature.

Having said this, negotiations with the Iranians cannot be taken lightly. The Iranian regime is very different from Kim Jong-un, whose father and grandfather yearned for direct eye-to-eye bilateral negotiations with the United States for years. For the North Korean leader, the very act of sitting down with the U.S. president was a huge win, for which he was willing to ease tensions. In Iran’s case, these negotiations are the last thing Supreme Leader Sayyid Ali Hosseini Khamenei—the one who calls the shots in Iran—desires. Moreover, unlike North Korea, Iran is not yet a nuclear state, and therefore the goal is not tension reduction in U.S.-Iran relations, but rather negotiating a better nuclear deal—no easy task—and one that must be treated very seriously. The U.S. negotiators must scrutinize Iran's strategies and its tactics of negotiating, going back to 2003. They must understand that this is a negotiation in which there is no win-win outcome: either Iran will be able to move to nuclear weapons or not. There is no halfway solution that will leave both sides satisfied. But Iran is the party that blatantly violated a commitment it made when joining the NPT and proceeded to lie and deceive the IAEA about its military nuclear advances for decades. As such it is not on equal standing with international powers that demand its return to the commitment it made. The fact that the strong powers are trying to achieve this at the negotiations table, rather than by using military force, does not mean that the approach can be any less forceful in order to succeed. In fact, negotiating with Iran is fundamentally a game of compellence.

And one of the most important things to avoid in negotiating with Iran is to be the party that blinks first. This was a clear lesson from the negotiations over the JCPOA. In those negotiations the P5+1 blinked first—most likely with concessions that were made early on, in the secret talks in Oman that preceded the official talks. But throughout the course of 2014–2015, observers of the process watched as Iran sat tight, refusing to budge, while the six powers began to make concessions. With the first concession, Iran knew there were more in the pipeline; and with every additional concession, the United States and Europeans became convinced that a deal was just around the corner, which paved the way for one more. The P5+1 became so heavily invested in the process that it was clear to the Iranians that they were desperate for a deal. This enabled Iran to continue to press for more leniency and to squeeze more concessions. The end result was a nuclear deal that was a far cry from the goals that the Obama administration stated at the outset.

What we have seen of late from Trump—after a pressure campaign that successfully built up leverage for the United States—are indications that he has started making mistakes, effectively blinking first. While he is so far sticking to the maximum pressure campaign, and adding more and more sanctions, he has also been demonstrating an eagerness—as opposed to willingness—to meet with Rohani, including consideration of French president Emmanuel Macron’s offer of $15 billion to Iran if it returns to the terms of the JCPOA. This eagerness has projected to Iran weakness that it will seek to manipulate and exploit and is certainly not a good starting point for bargaining with the Islamic regime.

What is further weakening Trump’s ability to negotiate successfully with Iran down the line is the creeping erosion of U.S. deterrence. This was on display following the Iranian attack on the oil facilities in Saudi Arabia. Experts across the board sensed that Iran’s level of escalation, in this case, was such that a U.S. response that went beyond sanctions was a real option. But Trump has shied away from a military response, further underscoring the gap between Trump’s rhetoric and actual willingness to act militarily.

Meanwhile, not enough attention is being devoted—neither by the IAEA nor by the international powers dealing with this crisis—to recent revelations of Iran's continued military nuclear activities, based on original Iranian documents contained in the nuclear archives. Curiously enough, every report on North Korea’s nuclear and missile advances—even when originating from a research institute—tends to be immediately embraced as accurate and true. By contrast, revelations regarding Iran’s continued military ambitions and activities tend to be met with immediate skepticism. Following the latest revelation by Israeli prime minister Benjamin Netanyahu regarding weaponization activities at Abadeh, the New York Times published analysis alternatively accusing Netanyahu of an election move that cannot be trusted, and questions about “why now?” If the information is true, they asked, why didn’t Netanyahu reveal it earlier? And on this basis the paper declared the information suspect. Of course, there could be many reasons for a delay, such as reluctance to reveal the information to the Iranians, but this is surely not a basis for sowing skepticism about its accuracy. Particularly when the issue centers on Israel’s credibility; taking into account Israel’s record in the field of intelligence, this skepticism is grossly misplaced.

It is crucial to highlight Iran’s past and more recent military nuclear activities, because this round of negotiations must begin with the unequivocal message that Iran worked on a military nuclear capability for decades in violation of the Treaty on the Nonproliferation of Nuclear Weapons (NPT) while deceiving the international community. In the negotiation over the JCPOA, the P5+1 did not insist on verifying the Possible Military Dimensions of Iran’s nuclear program, and this had adverse consequences for the outcome, as Iran demanded to be treated like a “normal” member of the NPT, including confidentiality rights with the International Atomic Energy Agency.

The UN General Assembly passed without a bilateral “summit” between presidents Trump and Rohani, or even a phone call, which is certainly for the best. If serious negotiations do come about, then the Trump administration must be well prepared. Meanwhile, it should remain firm with the pressure campaign, continue trying to get the Europeans on board a harsher response to Iran’s aggressions, carve out a clear negotiations strategy, and be wary of blinking first.