How Turkey Was Able to Send Coronavirus Aid to 55 Countries 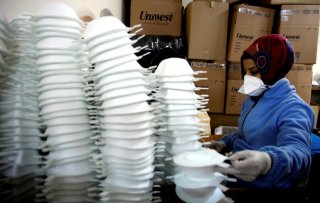 The arrival of a colossal Turkish Air Force Airbus 400 Atlas cargo plane at the Joint Base Andrews in Maryland last week was a historic moment. At the time when the coronavirus pandemic hit the United States hardest and hundreds of American were losing their lives daily, Turkey’s gesture was a symbolic display of solidarity more than to solve America’s acute shortage of medical supplies. The personnel from the U.S. Air Force, FEMA, and FDA unloaded the medical supplies which included 500,000 surgical masks, 4,000 overalls, 2,000 liters (528 gallons) of disinfectant, 1,500 goggles, 400 N-95 masks, and 500 face shields. The supply boxes displayed the words of thirteenth century Sufi Poet Jalaluddin Rumi in Turkish and English: “[sic]After hopelessness there is so much hope and after darkness, there is much brighter sun.”  (There is hope after despair and many suns after darkness).

Turkey’s aid was well received in an otherwise “unfriendly-to-Turkey” Washington, as both allies are at loggerheads over a plethora of issues that mostly emanate from Middle East politics. The co-chairs of the Caucus on US/Turkey Relations and Turkish Americans—Congressmen Joe Wilson, Steve Chabot, Gerald Connolly, and Steve Cohen, issued a lengthy statement expressing their gratitude for Turkey’s solidarity with the American people. The Department of Defense published a heartwarming video clip where it emphasized the strength of the Turkish-American alliance.

While Turkey’s aid to the United States was the most spectacular, in an unprecedented global move, Turkey also sent medical shipments to fifty-five countries, including Italy, Spain, Britain, France, Iran, those in the Balkans, some in Africa, and even in South America. Turkey’s outward dynamism at the time of the pandemic has predominantly been analyzed through political lenses and often dubbed as “Coronavirus Diplomacy.” What is missing here, however, is the explanation of how Turkey has been able to rush delivery of medical equipment to this many nations; when even the most developed ones suffered greatly from equipment shortage. The answer lies in Turkey’s self-sufficiency in those areas and the relative success in fighting the pandemic.

According to the 2019 World Trade Organization data, Turkey is the world's fourth-largest textile exporting country after China, India, and the United States. Its sufficient raw material capacity, supported by the textile infrastructure, allowed the country to produce up to two million/day disposable masks. Moreover, with the skyrocketing domestic and international demand, the government initiated a nationwide mobilization to mass-produce masks, disposable gowns, face shields, disinfectants, and respirators. The National Education Ministry gave the go-ahead to vocational and technical high school students to start the production of masks. Volunteers, using 3D printers, started to produce face shields. The state institutions also became involved in the mass mobilization. The Youth and Sports Ministry encouraged youth leaders and sports coaches to produce masks in sports arenas. The National Defense Ministry began manufacturing masks at its textile facilities for the Turkish Armed Forces.

Turkey’s soaring drone technology came handy at this time of crisis. The leading Turkish drone manufacturer Baykar and defense contractors Arcelik and ASELSAN teamed up and produced 5,000 ventilators. Ironically, while Turkey’s defense industry was busy manufacturing ventilators, U.S. president Donald Trump was fuming at GM and Ford for their reluctance to produce them.

The overdependence of the developed Western nations on China is probably what monumentally caused their failure in this unprecedented crisis. As Scott Paul, the president of the Alliance for American Manufacturing, puts it, “The absence of adequate domestic production capacity for things like face shields and respirators, coupled with the frailty of on-demand global supply chains and our utter reliance on them — for everything from the ingredients in our medications to parts of breathing machines — has left us dangerously exposed during an international health emergency.”

In other words, China’s initial inability to produce enough medical supplies created a delay which cost the lives of thousands in such China-dependent developed nations as the United States, France, Germany, Italy, and Spain. In fact, the situation turned so desperate that they began to confiscate each other’s limited medical equipment shipments that were ordered. Berlin accused the United States of confiscating, in Thailand, some 200,000 Chinese masks bound for Germany. Hard-hit Italy and Spain blamed France for “stealing” their mask shipment. Czechia seized but later released 110,000 masks Italy had ordered from China. The list goes on.

Turkey’s relative success in combating the pandemic facilitated the country’s ability to implement its global aid endeavor. Halting flights from China rather early on (February 3), introducing strict social distancing measures, and implementing near-complete lockdown in its thirty-one major cities, Turkey has been able to keep its fatality rate much lower, 42 deaths per million, than Spain’s 519, Italy’s 458, France’s 369, America’s 186, and Germany’s 87. Moreover, Turkey’s cultural traits, such as family members giving care to the elderly (nursing homes, where most deaths occurred in the West, are taboo in Turkey) and traditional widespread use of ‘Kolonya’, a traditional hand sanitizer were also contributing factors in containing the spread of the disease. Massive investment in healthcare, particularly the construction of mega city hospitals in the last decade has created an infrastructure that already supported the production of the much needed medical equipment. Finally, Turkey has made treatment of and medicine for the pandemic totally free, which also helped slow the spread.

These measures have prevented the country from being completely overwhelmed, allowing it to direct its resources to produce enough medical equipment to be able to send cargo planes to fifty-five countries around the globe, thus making it a major global player in the fight against coronavirus. More importantly, Turkey’s self-sufficiency and low dependency on the global supply chain, which has been proven susceptible to disruption, greatly helped. In an era where unconventional threats such as the pandemic are becoming too common perhaps it is time for the nations, particularly the developed ones, to revisit the importance of domestic production, and public healthcare.

Ali Demirdas, Ph.D. in political science from the University of South Carolina, is a former Fulbright scholar, professor of international affairs at the College of Charleston (2011–2018). You can follow him on Twitter: @demirdasPhD.