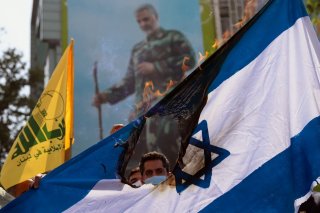 The latest flare-up of violence between Israel and the Palestinians was extinguished on May 21 after eleven days of exchanging rockets and missiles, leaving behind a trail of casualties and destruction and further compounding what is an intractable dilemma that has demonstrated its resistance to resolution throughout decades.

The conversation about the complexity of the Israeli-Palestinian conflict can go on infinitely, and there are always questions that remain unanswered. But the less-meditated aspect of this multi-pronged, byzantine feud is the role external powers have been playing since 1948 in lengthening and exacerbating what is no longer a fracas over territory, but a scene of wanton ideological politicking and muscle-flexing.

Beginning with the 1979 revolution, the leaders of the Islamic Republic of Iran have been fixated on taking up the cudgels on behalf of the people of Palestine as the standard-bearer of their salvation. Championing the Palestinian cause in lockstep with opposition to Israel have been essential linchpins of Iran’s foreign policy ever since.

At the outset, advocacy for the redemption of Palestine was a generic vision Iran shared with many Muslim Arab nations that maintained Palestinians were being subdued by an occupying power coveting their sovereignty and fundamental rights, eyeing to appropriate the holy lands of the Muslim world. So, there wasn’t anything eccentric about Iran not recognizing Israel or locking horns with Tel Aviv politicians, other than the fact that right until the 1979 Islamist uprising, Iran was one of Israel’s stalwart allies in the Persian Gulf region under the reign of Shah.

But in a stark departure from what originally was a revolutionary mantra, Iran’s aversion to Israel steadily metastasized into a full-blown, wholesale enmity, nearly impacting every aspect of its international relations and its position in the world. It was no longer homage to Palestine as a Muslim world issue or a humanitarian concern for the wellbeing of Palestinians as a repressed people that defined Iran’s posture on the Middle East conflict.

Rather, by the early 2000s, Iran found itself bogged down in a malicious vendetta against Israel, which although didn’t involve the use of arms or direct confrontation, had evolved into an exclusive brand of statecraft.

With the coming to power of the firebrand, ultra-conservative President Mahmoud Ahmadinejad in 2005, Iran’s anti-Israel animus was put on steroids and formalized as undisguised state policy that the country’s top authorities would openly and unapologetically promulgate. The president, on multiple occasions, including at the 2005 World without Zionism conference in Tehran, called for Israel to be wiped off the world map, described Israel as a “cancerous tumor,” and spewed venom at the Jewish state so frequently that even the United Nations Security Council reprimanded him for his incendiary rhetoric.

To consummate his anti-Israeli credentials and galvanize the metamorphosis of Iran’s foreign policy based on an aggressive boosterism for Palestine, Ahmadinejad went so far as to espouse irritating denials of the Holocaust, including in a 2005 speech to his supporters in the city of Zahedan when he called it “a myth,” and a 2009 interview with NPR when he asserted the Nazi extermination of Jews during the World War II was the “opinion of just a few.”

The controversial president never tried to take the edge off of allegations that he was an anti-Semite, and made use of international venues to peddle fierce anti-Jewish, anti-Israeli blusters, ranging from intoning that Israel was run by a clique of “Zionist murderers” to declaring that the existence of Israel is an “insult to humankind.”

Other ranking Iranian officials, such as Iranian vice president Mohammed Reza Rahimi, similarly refused to pull their punches when it came to Israel and capitalized on every opportunity to defame an arch-nemesis—the sworn enemy they gradually fabricated out of Israel since 1979. And their invectives occasionally, and in most cases deliberately, transpired to be anti-Semitic conspiracy theories and racist tropes.

These talking points and similar divisive hyperboles have been rehashed by Iranian officials over the past four decades unfailingly, only to draw condemnation by the international community, evoking sympathy for Israel, whose critics say is already being indulgently pampered by its Western acolytes, and painting Iran, home to nearly 10,000 Jews, as a patron of anti-Semitic bigotry.

The Islamic Republic’s anti-Israeli antipathy mutated into a sophisticated cold war piecemeal, and presently, the two belligerents are in effect fighting a proxy war. Iran has even charted out an indirect military role for itself in the Israeli-Palestinian conflict. In 2018, it was documented that it donated $100 million per year to Hamas and Islamic Jihad. Now, the financial aid is rumored to have increased, amounting to $30 million per month exclusively for Hamas.

But Iran’s unbridled augmenting of hostilities and deepening virulence with Israel hasn’t really helped Palestinians. They continue to be disenfranchised, living through what some experts say is a burden of settler colonialism and others describe as full-throated racism resembling the actions of Nazis.

If these demarches are all designed to ensure Palestinians live more dignified lives, to knock down policies that disempower and deny them self-determination, and to pull the plug on occupation and illegal settlements, catalyzing an eventuality desired by the Muslim world, Iran hasn’t achieved anything.

Instead, Iran now faces an adversary that is one of the most advanced militaries in the world, sits on the only nuclear arsenal in the Middle East with at least ninety plutonium-based atomic warheads, and has time and again, with impunity and chutzpah, triggered incidents of nuclear sabotage and cyber attacks across the country and even assassinated Tehran’s most distinguished nuclear executive on the Iranian soil in broad daylight.

Incidentally, Iran hasn’t won the hearts and minds of Palestinians either. It is often accused of meddling in the affairs of Arab countries, as many states with stakes in the Palestinian question categorize the dilemma as an Arab world problem rather than something Iran should be weighing in on.

Tehran’s approach to the Israeli-Palestinian imbroglio is perceived as patronizing. Sadly enough, a Pew Research Center survey in 2015 found an overwhelming majority of 57 percent of the Palestinians hold negative views of Iran, and Zogby Research Services’ polling revealed earlier 58 percent of Palestinians think “it is important for Iran to withdraw from conflicts in Arab countries”— despite all the lengths the Islamic Republic has obviously gone to be a crusader for their cause.

Put succinctly, Iran’s role in the Israel-Palestine vexation has been counterproductive. If it is indeed concerned for the fate of a troubled populace under military occupation and deems it a religious duty to assist them, there are plenty of constructive pathways to contribute.

Perhaps the most reasonable preference would be to work in synergy with other Muslim countries, within the framework of the Organization of Islamic Cooperation, to navigate the best options for delivering humanitarian aid to the Palestinians, particularly in the embattled Gaza Strip, and bring peace and stability to an edgy situation.

Clinging to nonconformism and hubris in campaigning on behalf of Palestine in a “revolutionary” fashion is a route neither the Palestinians nor the Muslim world would want Iran to tread. It simply spawns further imbalance in the Israel-Palestine relations and multiplies the degeneration of Iran’s global image.

Kourosh Ziabari is an award-winning Iranian journalist and reporter. He is a correspondent with Asia Times and a contributor to Fair Observer. He is the recipient of a Chevening Award from the Foreign, Commonwealth and Development Office. He is also an American Middle Eastern Network for Dialogue at Stanford (AMENDS) Fellow and the East-West Center's Senior Journalists Seminar fellow. Kourosh’s writings have appeared on The Huffington Post, openDemocracy, Al-Monitor, Middle East Eye, Responsible Statecraft, Al-Arabiya, International Policy Digest and BBC Persian. He tweets at @KZiabari.