Iran Bluster Is about Red Lines, Not War 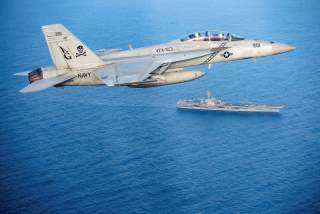 In the past week, American-Iranian tensions flared to heights not seen since the Reagan years, when U.S. and Iranian ships and planes faced off in the Persian Gulf. Not only have Iranian irregular forces apparently sabotaged four ships off the major Emirati port of Fujairah with either magnet bombs or underwater drones, but a subsequent drone attack on a Saudi pipeline amplified tensions to a new level.

Even on the best of days in hyper-partisan Washington, there are enough polemics to go around. The fact that national security in general—and Iran policy in particular—have become political footballs only makes the problem worse. Never one to miss an opportunity to throw fuel on the rhetorical fire, President Donald Trump threatened via tweet, “If Iran wants to fight, that will be the official end of Iran. Never threaten the United States again!”

Happily, however, nothing in the American military posture makes it appear that war—or even a limited engagement—is imminent, let alone likely.

Consider the U.S. Navy’s posture: The Trump administration has reportedly dispatched an aircraft carrier to the Persian Gulf, but if a war against Iran really was on the table, then this would be the worst possible move.

After all, the Persian Gulf is both narrow and shallow. To launch aircraft off a Nimitz-class aircraft carrier, it takes about twenty-six knots of wind speed across the deck—even when using steam-operated catapults that throw F-18 Hornets and E-2C Hawkeyes off the carrier at around one-hundred-and-seventy miles per hour. To achieve the necessary wind speed requires either speeding up or turning into the wind, neither of which it is easy or safe to do in the Persian Gulf, especially as that body of water is home to scattered islands such as the Farsi, Abu Musa, Greater and Lesser Tonb, and Kish, among others.

Throw into this mix the fact that, ever since Operation Praying Mantis in 1988, Iran’s basic doctrine has been to swarm U.S. ships with small boats rather than engage directly with Iran’s destroyers or frigates. This means any deployment into the Persian Gulf is ill-advised if hostilities are imminent. Conversely, if a carrier or carriers took up station a couple hundred miles off the coast of Iran in the northern Indian Ocean, U.S. planes could strike at Iran and U.S. ships would be largely out-of-range of Iranian small boats and anti-ship missiles (or at least have greater reaction time to those threats).

So why have tensions grown so high, so fast? When Americans think about Iran, often they know the top three or four individuals, men like Supreme Leader Ali Khamenei or President Hassan Rouhani. Maybe they have heard of Qassem Soleimani, the head of the Quds Force. But, over the past year or so, there has been a transition at the top of the Iranian military. On April 21, 2019, Hossein Salami took over as head of the Islamic Revolutionary Guard Corps (IRGC). His predecessor Mohammad Ali Jafari may have been awful (from the U.S. perspective), but he was also a known quantity. True, most American Iran analysts are familiar with Salami since he long served as a deputy to Jafari, but the last month has been first with Salami making decisions not theoretically tempered by superiors.

In the division of responsibility between the Islamic Republic of Iran Navy (IRIN) and Islamic Revolutionary Guard Corps Navy (IRGC-N), the IRIN operates primarily outside the Persian Gulf while the IRGC-N has primacy over the Gulf itself. Additionally, both the IRIN and IRGC-N share responsibility for the Strait of Hormuz.

Generally, the U.S. Navy maintains a professional relationship with the IRIN, but the IRGC-N is more provocative and ideological. Both Iranian navies have also recently had changes of command. When Hossein Khanzadi took command of the IRIN in November 2017 from Habibollah Sayyari, he swore that the IRIN would “wave the flag of our country right on the US’s doorstep.” That might be hyperbole or wishful thinking, but it is not clear Khanzadi understands that. Sayyari, however, had twelve years at the helm and he understood what was possible and what was not—after all, as he presided over the deployment of an Atlantic-bound flotilla that ended up stranded in South Africa for emergency repairs.

Ali Fadavi, IRGC-N commander, likewise presided over his force for eight years. He may have been a provocateur, but with time U.S. forces and the Arab Gulf states grew to understand him. The same is not true with Alireza Tangsiri, who replaced Fadavi just nine months ago.

What is the point? It has been more than two military generations since IRGC leaders learned what happens if they confront the U.S. directly or attack into the waters of America’s Arab allies. It is quite possible that Salami, Khanzadi, and Tangsiri (or some combination of them) sought to distinguish themselves from their predecessors at the expense of the United States or the Gulf Cooperation Council states.

Under such circumstances, Washington’s decision to firmly establish red lines rather than turning the other cheek can best prevent war and conflict. After all, in the Middle East, it is not oil or water that causes war, but rather overconfidence. And, whatever one thinks about Trump and his national-security team, it is clear that in recent years a noxious brew of Iranian overconfidence and lack of experience among Iran’s top Navy and IRGC commanders was leading to a perfect storm, one which hopefully now has been averted.