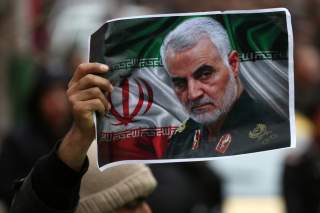 On January 3, President Donald Trump ordered an airstrike that killed Maj. Gen. Qassim Suleimani, the commander of the Quds Force, Iran’s Islamic Revolutionary Guard Corps’ (IRGC) external operations branch. Days later, the regime retaliated by rocketing Iraqi army bases hosting U.S. forces. However, Iran’s truly concerning reaction came when it announced an end to all limits on its uranium enrichment capacity, the percentage of enrichment, stockpiling, and research and development. Tehran likely did this to accelerate its long-standing pursuit of a nuclear weapon—barely impeded by the Joint Comprehensive Plan of Action (JCPOA)—since the strike on Soleimani underscored the inadequacy of its conventional means to deter the United States or regional adversaries.

To Iran, Suleimani wasn’t an ordinary general. Had that been the case, then Tehran could have ended the matter by simply replacing him with a competent successor. In fact, the Quds Force’s new commander, Esmail Qaani, is a skilled officer in his own right.

But Suleimani was more than that. He was a symbol to friend and foe alike, with cultural importance to regime supporters that one Iranian cleric likened to that of Spiderman to American society, were the latter not a fictional character. Hezbollah’s Secretary-General Hassan Nasrallah said Suleimani’s “shoe is worth more than the head of Donald Trump and the entire American leadership.” This isn’t mere hyperbole. Iran and its proxies worked very hard to build up Suleimani’s “cult of personality” among the supporters of its Resistance Axis.

Perhaps the Trump administration understood this. That’s likely why Trump seemed almost conciliatory while addressing the IRGC missile strike, attempting to walk back the impact of Suleimani’s death. True, Trump vowed Iran would never obtain a nuclear weapon on his watch and recounted the litany of Iran’s transgressions. But he also expressed his lack of desire to use U.S. military force against Tehran and offered to resume nuclear negotiations without preconditions. He even signaled his readiness to cooperate with the Islamic Republic against ISIS, “and [on] other shared priorities.”

But Iran knew that killing Suleimani had exposed its military weaknesses, and Trump’s words couldn’t undo that damage to its deterrence. If anything, its retaliatory missile barrage further underlined its lack of conventional parity. There’s contradictory information on the matter, but it appears Iran intended its strike to miss American troops. The IRGC fired only a handful of missiles, at least one of which may not have been armed with a warhead. It also gave the Iraqi government advanced notice of the strike, knowing they could forward it to their American guests.

Arguably, then, the missile strike further eroded Iranian deterrence. It demonstrated that Tehran could only muster a symbolic retaliation, even to avenge the death of the architect of its regional expansionism. Because anything more intense could lead to an unwinnable conventional war with the United States. Iranian state media’s fabricated American casualty claims—upwards of eighty dead and two hundred wounded—underscored that the move was meant for domestic consumption.

This might placate the regime’s hardcore supporters but Iran knows it won’t restrain its foes. Washington had just assassinated one of its top generals, a major escalation in response to Iranian proxies killing an American contractor and attacking the U.S. Embassy in Baghdad. By contrast, Iran’s response exposed its lack of options. Tehran and the Resistance Axis, including its top leadership, would now appear vulnerable to their enemies. Nasrallah voiced this fear while eulogizing Suleimani. Whatever asymmetrical attrition war Iran and its proxies are planning to—and will likely—wage against U.S. forces and interests in the region won’t change that.

Iran lacks any conventional means to restore its battered deterrence. It also lacks the funds to upgrade its outdated military arsenal, particularly with U.S. sanctions in place. Instead, the simplest route for Tehran to restore regional parity is by pursuing a nuclear weapon—the pathways to which the JCPOA left virtually intact, by recognizing Iran’s right to enrich uranium and including sunset provisions on the most concerning aspects of its nuclear program.

However, Iran likely won’t use it. Such a weapon’s hypothetical primary targets would be the regime’s regional foes, such as Israel and Saudi Arabia. But both countries have Islamic holy sites and large Arab and Muslim populations. Thus, harm to either would further erode Iran and its proxies battered regional image. Moreover, nuclear fallout from a strike would impact neighboring states, which might then also actively join the ranks of Tehran’s regional adversaries.

Instead, Iran will likely use its mere possession of a nuclear weapon to buttress what remains its most powerful asset—its regional proxies.

How would this work?

Iran excels at psychological warfare, largely to compensate for its conventional weaknesses. In the past, Tehran and its proxies have successfully used propaganda to prevent their foes from deploying their maximum strength against the conventionally much weaker “Resistance Axis.” They’ve repeatedly used this method to avoid defeat. As part of that psychological warfare, Iran has built a reputation of adventurism and reckless martyrdom-seeking, belying the regime’s highly pragmatic and long-term thinking.

In other words, Iran has created the idea that there’s a risk—however minimal—it could use a nuclear weapon. But it’s just enough of a risk to restrain its adversaries. The Saudis lack nuclear parity with Iran, and Israel’s small, concentrated population denies it a second-strike capability, despite its vast, albeit undeclared, nuclear arsenal.

Meanwhile, Iran has surrounded these foes with increasingly well-equipped proxies, which it could activate to wage low-intensity wars against them and other regional enemies. If any of those enemies were to respond in a manner that crossed Iran’s redlines—which could unilaterally occur simply by Iran being in possession of a nuclear weapon—it would simply have to rattle the nuclear saber to stop them in their tracks. It could then force its enemies to accept realities—like Hezbollah or armed factions in Gaza firing daily rockets into northern and southern Israel, respectively—that would erode their morale, and bleed them through slow attrition.

Tehran can thus checkmate its opponents and use nuclear deterrence to prevent outside forces—like the United States or Europe—from coming to their aid without ever having to use its nuclear arsenal.