Iran Haunts the 46th Anniversary of the Lebanese Civil War 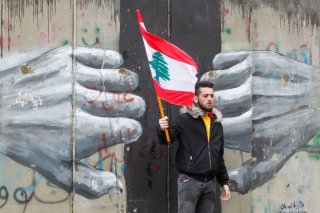 The bloody civil conflict that swept Lebanon on this day in 1975 resulted in more than 150,000 fatalities and 300,000 injuries. Tens of thousands of people currently remain displaced within Lebanon. Although the regional and international context that contributed to the civil conflict is different today, Lebanon again is in crisis. The power vacuum that allowed Hezbollah to seize control in Lebanon is starting to reappear. As economic devastation, corruption, political turmoil, and civil unrest continue to keep Beirut on the brink of collapse, the country is at risk of Tehran’s expanding footprint.

Prior to the civil war, Lebanon was a functioning multi-sectarian country, with Maronite Christians and Sunni Muslims making up the majority of the population. The mid-twentieth century brought regional shifts which altered the fabric of Beirut. The establishment of Israel, the surge of Pan-Arabism, and the arrival of the Palestine Liberation Organization (PLO) were crucial factors that helped catalyze the conflict that would consume Beirut for fifteen years.

The PLO-supported Lebanese National Movement (LNM) arose during the early years of the war. This pan-Arabist front was comprised of Sunni Muslims and Arab nationalists. In opposition, the Phalanges Christian democratic political party contained the Maronite population. Although tensions between the two groups escalated in the mid to late twentieth century, two key events directly triggered the onset of the war. On April 13, 1975, a gunman opened fire on a church in a Christian suburb in Eastern Lebanon, killing four people. The Phalangists claimed the perpetrator was an LNM guerilla. Hours later, a Phalangist gunman ambushed a bus carrying mostly Palestinian passengers, killing twenty-seven on board.

As retaliations continued to unfold, PLO guerilla fighters were able to expand their armed struggle against Israel. The group’s expulsion from the Hashemite Kingdom in 1970 and arrival in Lebanon gave them a tactical advantage to attack the Jewish State from the border. Israel responded to their assaults from the border by invading southern Lebanon twice, in 1978 and 1982.

The effort to expel the PLO from Lebanon expanded by 1982 as a Western peacekeeping coalition dubbed the Multinational Force was created. The task force, comprised of Italy, the United States, the United Kingdom, and France, became increasingly scrutinized on the ground as a partisan entity. At this point, the ongoing civil war, Western troop presence, and general turmoil created opportune conditions that Iran was able to exploit.

Under the pretense of fighting the “Zionist” and “imperialist” occupation, Iran’s Islamic Revolutionary Guard Corps (IRGC) provided training, funds, and assistance to Lebanon’s Shiite militias. This awakening of Shiite activism would pave the path for Tehran to gain its most important asset to date, Lebanon’s Party of God—Hezbollah.

More recently, Iran has repositioned itself as the country’s “Islamic Resistance Force,” pledging to fight against Israeli occupation. In addition to its military operations, Hezbollah’s grip on Beirut extends to the shadow economy it controls and the active political and social groups it dominates. In addition to the network of social services Hezbollah provides, including schools, health care, and infrastructure, party members have held cabinet seats since 2005. According to the Foundation for the Defense of Democracies, Hezbollah seizes between $500 million and $1 billion annually from Lebanon’s economy.

Hezbollah’s deep entrenchment in all aspects of society has led Lebanon down a tumultuous road. Today Beirut faces its worst crisis since its fifteen-year-long civil war. Economic devastation, political corruption, and large-scale demonstrations have brought Lebanon to its breaking point.

Iran’s proxy approach is evident across the Middle East in Yemen, Iraq, and Syria. Tehran has been waging battles from each front, countering Saudi, American, and Israeli interests respectively. As its proxy wars continue to escalate across the region, Iran’s exploitation of Lebanon’s strategic importance will only increase.