Iran Prepares to Suffer the Wrath of the Coronavirus 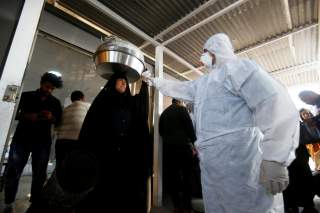 The spread of coronavirus has rapidly come to the Middle East after almost two months of being mostly contained in China, where it has killed more than two thousand people. Iran’s leadership has responded by either ignoring the crisis or denying that it exists, even as all of Iran’s neighboring countries have closed the borders that they share with Iran and began to institute checks on Iranians traveling abroad.

The reaction of Middle Eastern states reveals a lack of coordination in responding to the emerging crises and also creates questions about what kind of impact a virus can have on a region that has deep divisions and smoldering conflicts. For instance, on Sunday evening Israel carried out airstrikes in Gaza and Syria in response to rocket fire from Palestine while the Russian-backed Syrian regime continued to clash with Turkish-backed forces in Syria’s northern Idlib. In Idlib alone, roughly nine hundred thousand people displaced in recent weeks, just some of the millions still living as refugees and internally displaced persons (IDP) across the region.

It is unclear how the coronavirus suddenly appeared in Iran last week. The number of dead rose to at least twelve by February 24 and there could soon be many more. Iran’s media observed a blackout on information about the spread of the virus in the country over the weekend of February 20 while the government scrambled to highlight elections results from a dismal turnout last Friday. Meanwhile, the only information available to the average person about how to prevent the virus from spreading were some infographics on local media. On Monday, health officials denied rumors, spread by a lawmaker, that the coronavirus had killed fifty people. By that time, officials had ordered the closure of schools and universities, an extraordinary move since they refused to reveal how many people actually had the virus.

Kuwait, Iraq, Turkey, Armenia, Pakistan and Afghanistan have decided to close their borders or institute new checks and quarantines in an effort to prevent the virus from spreading from Tehran and the religious city of Qom. In the Kurdistan region of Iraq, health officials have observed that more than one thousand people have returned from Iran. Meanwhile, Turkey revealed that it suspected there were over 750 cases in Tehran as of last Friday and has taken additional precautions.  As for Iraq, it has closed its border with Kuwait to prevent the virus from spreading. Kuwait has, in turn, evacuated hundreds of citizens from Iran. But in Lebanon and Iraq flights to Iran continue. Muqtada al-Sadr, the Iraqi politician, even recently returned from Qom. Now there are rumors some seminary students who came back from Iran might be sick in Najaf., Iraq. Similarly, people are sick in Bahrain, Kuwait and Oman. In Israel, the first cases from a cruise ship have also been detected amid fears that South Korean tourists also may have spread the virus. Neighboring Jordan and the Palestinian Authority are taking precautions.

The shadow of the coronavirus now hangs over the Middle East as it did over many Asian countries in January and early February. However, there is a major difference in the way that the virus can be confronted in the region when compared to measures taken in Italy or Singapore. Most Middle Eastern Countries already have local crises. For instance, in Iraq has endured five months of protests that have left six hundred dead and twenty thousand wounded. The country is divided politically and there is a lack of trust between communities and the government. ISIS is still a threat and Iraq’s cities lie in ruins two years after the ISIS war. Additionally, there are not only IDP camps where groups like Yazidis still live but also widespread sanitation problems that affect millions of people in major cities like Basra. There are also porous borders with Iran and Iraq, and between Iran, Turkey and Afghanistan and Pakistan. There are insurgent groups, smugglers, and other issues.

The Middle East is also deeply divided into several alliance systems. In 2017, Saudi Arabia led its allies to break relations with Qatar. Saudi Arabia is part of an alliance system that includes Bahrain, the UAE, Egypt and their allies, such as the government of Yemen and Khalifa Haftar, a Lebanese military leader. These countries maintain relatively close ties to Jordan and Kuwait, both of which are monarchies. On the other end of the spectrum are allies of Iran, which include Shi’ite paramilitaries in Iraq, the Syrian government, Hezbollah, and leading politicians in Lebanon and Iraq. Iran also backs the Houthi rebels in Yemen, who fired rockets at Saudi Arabia during a G20 confab.

A third side of the Middle East is represented by Turkey and Qatar, both close allies, and their support of the Tripoli-based Government of the National Accord in Libya. They also have close connections with Hamas, which runs Gaza. Turkey plays a major role in northern Syria while the United States plays a role in eastern Syria. The Kurdistan Region of Iraq, a developed area that is preparing to meet the coronavirus threat, is close to both the United States and some Gulf states. Plus, it enjoys close trade relations with Ankara. Add to this the role of Israel, which has enjoyed better, although not official, relations with Gulf states in recent years. This is the Middle East that is about to endure a major health crisis.

Confronting the coronavirus has included a mix of shuddering borders, banning people and quarantining individuals. This is the process that has taken place in Asia and is being applied to the Middle East. However, Middle East governments lack close relations and a coordinated response, which is a major difference from Asian states that, with some exceptions such as North Korea, tend to enjoy more amicable relations or at least communicate with each other. Iran’s regime has sought to deny that the coronavirus crisis is emerging. It has long practiced a method of denying social problems, whether flooding or poverty. It even denied the protests last year. Additionally, it prefers to blame the United States or other countries for spreading rumors about the failures of the government in Tehran. But protests last year and clashes with dissident groups in periphery regions point to widespread displeasure with Tehran. And a low turnout shows a lack of faith in institutions. The virus crisis has already led to clashes in Talesh and anger among university students. Iran does not appear to have instituted the kind of quarantine in Qom that China did in Wuhan. It does not even appear to have replicated the measures Italy has taken. Religious students and pilgrims remain free to come and go to public areas in Qom, which is how the virus has been spreading from Iran.

To date, the virus has spread through the heartland of Iran into provinces such as Qom, Rasht, Hamadan, Markazi and Isfahan. Schools and universities were closed in at least a third of the country’s provinces. However, minimal information on the crisis is available in Tehran and the government of Hassan Rouhani, which hosted an Austrian delegation on February 23, continues to act as if everything is normal. Iran’s neighboring states will continue to wait and see if the crisis grows. On Monday, new cases were reported in Iraq, Bahrain, Oman, Kuwait and countries are concerned at what might come next. Iran’s current numbers of dead, the second largest outside of China, indicate that there are more people who are infected with the virus than what has been reported. Putting a stop to it will require the Tehran government to trust and share information with its neighbors. In a region where media censorship and self-censorship are normal and most countries are not democracies, there are rumors abound that the virus will spread widely. Political divisions and complicated alliances will contribute to tensions over how various countries respond to the virus.