The Iran Protests of 2020 Are A Big Deal 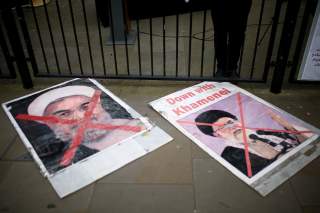 On July 3, 1988, the USS Vincennes shot down Iran Air 655, an airliner traveling from Bandar Abbas to Dubai. The USS Vincennes, which had earlier been harassed by Iranian small boats, believed they were under attack and crewmen misinterpreted the data as the Iranian airliner approached. (Iran for its part had failed to warn the civilian airliner to avoid the sector in the Persian Gulf where the Vincennes was operating, as was standard when skirmishes had occurred).

It was a tragic mistake, and one for which the United States subsequently apologized. What was less known, however, was the impact the downing had on then-Supreme Leader Ayatollah Ruhollah Khomeini. When Iraq attacked Iran in 1980, Khomeini ordered all Iranians to defend their country. The Iran-Iraq War was like World War I on steroids, with trench warfare, machine gun nests, minefields, and mustard gas--and SCUD missiles flying back and forth. By 1982, the numerically superior Iranian forces had more or less pushed back their Iraqi counterparts. Declassified Iranian documents show that Khomeini was considering a ceasefire then, but the Islamic Revolutionary Guard Corps interceded and convinced the Iranian leader to continue to fight so that they might try not only to rid Iraq of Saddam Hussein, but also continue on the warpath to eradicate Israel. There followed six more years of stalemate and perhaps a half-million more casualties.  Then came the shootdown of Iran Air 655. Khomeini’s conspiracy-addled mind could never accept that its downing was an accident, but he recognized its impact on the Iranian public. He also concluded that if the United States was willing to go so far as to shoot down an airliner, Washington would stop at nothing to prevent Iran from achieving its war aims. He decided then to accept the ceasefire, likening it to drinking from “a chalice of poison.”

Fast forward to the current tragedy surrounding the downing of a Ukrainian airliner. That the regime was responsible was almost immediately obvious. This was not the first time Iranian anti-aircraft radar had locked onto civilian flights; frankly, it is bizarre that any insurance underwriter allowed their aircraft to overfly Iran for the past year. Iranian commanders had also bragged about their authority to shoot down aircraft. Senior leaders on one hand falsely expected an attack and on the other made no effort to warn their own civil aviation that they could be operating in a military environment. Clumsy efforts to deny the obvious and then to sanitize the crash sight to further perpetuate a cover-up undercut any moral authority the leadership had.

In some ways, the current protests targeting the regime’s actions could be the Islamic Republic’s most serious. The very basis of the ‘guardianship of the jurists’ is that senior clerics can act as deputies carrying out the Hidden Imam’s messianic will until his return ushers in a period of just, Islamic, and incorruptible government on earth. In the past, senior clerics have engaged in corruption schemes ranging from embezzlement to human trafficking, but seldom have such senior authorities in the Revolutionary Guard and the Office of the Supreme Leader himself been so blatantly caught lying as this past week. And, while the Supreme Leader’s business empire is worth billions of dollars, its impact upon the Iranian public is often hidden from sight. Not so with the Ukrainian airline victims, most of whom were Iranian (Iran does not accept dual citizenship and so visitors to Iran—whether citizens of Canada, Great Britain, Germany, or the United States—often travel to Iran on Iranian passports).

Likewise, the Islamic Revolutionary Guard Corps depicts itself as the defenders of the Iranian people. But, in this case, they are their murderers.

Iranians are right to demand accountability. The regime now has a choice: shield its top officials including Khamenei from the fruits of their dishonesty or signal to the Iranian public the utter dishonesty of the rhetoric of justice which the Iranian regime has promoted for the last 40 years.