Iran Under Pressure: Why America's Sanctions Strategy Will Work 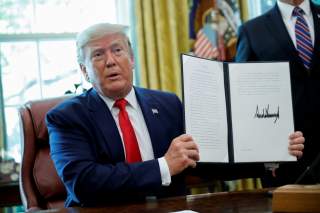 Iran announced on July 1 that it had crossed the threshold of a three-hundred-kilogram stockpile of low enriched uranium that it is allowed under the terms of the Joint Comprehensive Plan of Action (JCPOA), and the International Atomic Energy Agency confirmed later in the afternoon that this was indeed the situation.

While the reason that Iran is lashing out has to do with the fact that it is suffering the effects of the sanctions that the United States has put in place as part of its “maximum pressure” campaign, Iran’s message in the nuclear realm is directed primarily to the Europeans. In line with its long-time tactic of “divide and conquer” with regard to the Americans and Europeans, Iran wants to get the Europeans to blame the United States for Iran’s provocations (accepting that Iran “had no choice but to lash out”). It wants to finally secure a financial mechanism that will circumvent U.S. sanctions, and allow economic deals to flourish between Iran and European companies.

In contrast to those who say that current tensions with Iran are rooted in the fact that the United States exited the nuclear deal last year, the reality is that the problems are grounded in the flawed provisions of the JCPOA itself. The inability to fix the deal in early 2018 was the background to Trump’s decision to leave the JCPOA. Indeed, Iran’s very ability to provoke regarding uranium enrichment is a direct result of one of the major flaws in the JCPOA. The nuclear deal allowed Iran to continue to enrich and work on an entire line of advanced centrifuges that would spin many times faster than those currently in use. As such, rather than strengthening the message that uranium enrichment is unacceptable for a state with a record of lying and cheating in the nuclear realm, the deal unwisely granted legitimacy to Iran’s uranium enrichment program. And so today Iran can turn up enrichment—by either increasing its stockpile or the level of enrichment—at will.

While Iran has been signaling through its behavior over the past year that it does not want to leave the JCPOA—because any other option will be worse from its point of view—the regime has limited options for communicating its distress. Rather than returning to the table, it is currently pursuing two pressure tracks of its own. It is committing direct provocations against American interests in the Gulf and it has been threatening to gradually end its commitments according to the JCPOA. On both fronts the regime has so far been treading carefully. In the Gulf region it risks a U.S. military response, especially if it kills U.S. servicemen; in the nuclear realm, the Europeans could return to the sanctions route in light of Iran’s breaches.

So far, the Europeans have not reacted strongly to Iran crossing the uranium enrichment threshold and are treating the current violation as a minor infraction. For the Europeans to continue to attempt to relieve pressure on Iran by circumventing U.S. sanctions would be a grave mistake at this point, and counterproductive to the strategy that the United States is pursuing: maximum pressure on Iran so that it will come back to the table for a better deal. And no strategy has a better chance of achieving that goal than pressure.

Indeed, the onus is currently on the Europeans to stand firmly behind their commitment to nuclear nonproliferation and to send a much stronger political message of unity with the United States as far as the unacceptability of Iran violating its JCPOA commitments, even if deemed minor. Iran cannot be allowed to hold international actors hostage, and to be the one calling the shots. If Iran senses that it is up against a firm bloc, then it will be more likely to be wary of taking further steps. For its part, the United States should bolster its deterrent stance in the Gulf, but on the nuclear front its current options are limited as the president has made his position clear that Iran is playing with fire, and sanctions are being ratcheted up in any case.

If the Europeans need a reminder about the nature of the Iranian regime, then they got it yesterday when the Iranians announced that Iran can destroy Israel in half an hour if it is attacked by the United States. A regime that makes such threats must be tightly held in check, and it certainly cannot be allowed to cross the nuclear threshold.