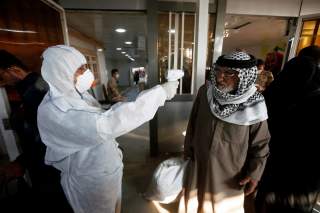 Iran already has the highest death toll outside of China, and that is just with the numbers the Iranian government acknowledges. There is no reason for the widespread outbreak in Iran other than regime incompetence and venality. As with the Chinese government, the Iranian regime’s first approach was to deny and cover-up. It is the knee-jerk reaction for the Iranian regime and was also on full display in Tehran’s initial reaction to its downing of a Ukrainian jetliner. There is an irony, here, in that in the wake of the 1978 Tabas earthquake, it was the incompetence of the shah’s regime juxtaposed with the efficiency of clerical charities that catalyzed the Islamic revolution.

Iranians may be victims of their government’s corruption and opacity but, in the long run, it will be the Iraqis who suffer. While in Washington, diplomats focus on terrorism and the malign activities of Iranian-controlled Shi’ite militias in Iraq, sitting in the Baghdad, Basra, or Najaf airports or at the bus station in Karbala is to see a cross-section of Iranian society. Millions of pilgrims visit Iraq each year.

While oil brings the most money into Iraq’s treasury, it remains invisible to many Iraqis. The oil industry, after all, is one of the least labor-intensive sectors inside Iraq (or any other country). The second-order impact of religious pilgrims in Iraq is huge: restaurants, hotels, and malls all rely on the constant flow of Iranian pilgrims. Iran is also Iraq’s largest trading partner, and Iranian businessmen are a frequent sight in Iraqi four- and five-star hotels, some of which are the result of Iranian investment.

The Iraqi government has sought to be proactive, but the crisis could not have come at a worse time against the backdrop of a political crisis and an as-yet unconfirmed prime minister-designate. When it comes to the Iranian-backed Shi’ite militias like the Badr Corp, Kataib Hezbollah, or Asa’ib Ahl al-Haq, the United States focuses upon their role in projecting Iranian power in Iraq but, over the past year or two, there has been another dynamic at play: As the Iranian economy has descended into recession and Islamic Revolutionary Guard Corps-owned businesses have also suffered, the Iranian-backed militias in Iraq have shifted their role: rather than receive Iranian largesse, increasingly they utilize their own business interests in Iraq to subsidize their Iranian sponsors.

What this means in sum is that the Iranian interests in Tehran and among Iraqi groups which operate at Iran’s behest, there is great pressure to keep the borders open. The Revolutionary Guards and their clients have used their power to ignore or compel defiance of Iraqi government rules and regulations. The Revolutionary Guards-owned Mahan Air passenger and cargo service, for example, continues to fly to Iraq despite recent revocation of landing rights for Iranian aircraft. The same corruption in Iran allows flights from China to continue underscores how the Iranian regime's greed and incompetence place the region at risk. Iraqi wasta [connections, nepotism] culture exacerbates the problem as Iraqis use personal connections to sidestep proactive but inconvenient measures.

The 1917-1918 Spanish flu decimated both Iraq and Iran’s population. (George Washington University Professor Amir Arsalan Afkhami’s book A Modern Contagion is a must-read on that episode and the history of quarantine in Iran). Alas, it appears that venality, corruption, and denial could now condemn thousands of Iranians and Iraqis to suffer the same fate.