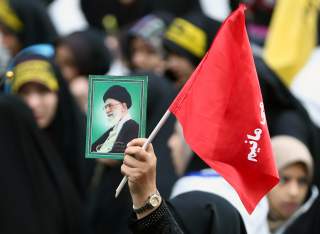 Just who speaks for Iran? When engaging with the Islamic Republic, the international community has tended to treat the country as a monolith, a consolidated political and ideological entity presided over by an entrenched clerical elite. That, however, is hardly the case. In truth, Iran is a complex and cosmopolitan melting pot made up of multiple, competing ethnic identities kept in check by a strong central authority—but just barely.

This state of affairs is a natural byproduct of Iran’s imperial history. At the height of its power in the late 1600s, the Safavid dynasty, the greatest of the Iranian empires that spanned more than half a millennia, covered a swathe of territory stretching from central Afghanistan to southeastern Turkey and encompassed millions of people and dozens of distinct ethnic groups. Over the years, as the contours of imperial Iran expanded and constricted, a multitude of cultures and ethnicities came under its sway. As the centuries wore on, migration and commerce merged these disparate communities into what we now know as modern-day Iran.

Exactly how ethnically diverse Iran actually is, however, is a matter of some debate. There are currently “no agreed-upon academic or governmental sources on Iran’s ethnic make-up,” says Brenda Shaffer of Georgetown University, one of the country’s leading experts on Iran’s ethnic minorities. And because there aren’t, U.S. government estimates—including the CIA’s vaunted World Factbook, which policy institutes and academia routinely rely on for figures—have tended to reflect official Iranian data regarding the population of its provinces.

That, Shaffer insists, is a mistake, because the Iranian regime has a vested interest in overrepresenting the country’s Persian majority—and underplaying the size and salience of other ethnic groups. By her estimates, “the most reliable estimates of what Iran actually looks like internally” can be extrapolated from earlier, and less political, sociological surveys carried out in the 1970s. Based on those figures, Shaffer projects that Iran’s current population of more than eighty-five million is made up of some forty-two million Persians, an estimated twenty-seven million Azerbaijanis, and roughly eight million Kurds, five million Arabs, two million Turkmen, and one-and-a-half million Baluch.

In other words, while Persians are indeed a majority within the Islamic Republic, their numbers are considerably more modest than generally advertised. The rest of the country, meanwhile, is comprised of a number of large and influential ethnic groups.

These groups are mostly concentrated in Iran’s various provinces, from East Azerbaijan, West Azerbaijan and Ardabil in the country’s northwest (home to the bulk of Iranian Azerbaijanis) to Sistan-Baluchistan in the southeast, where the preponderance of Iranian Baluch reside. Yet their influence is felt far beyond those places. Shaffer notes that, virtually without exception, Iran’s major urban centers are multi-ethnic affairs—the product of decades of intermarriage between urban dwellers from different parts of the country (and, before that, the empire). The most prominent example of this trend is none other than Iranian Supreme Leader Ali Khamenei himself, whose ethnic Azerbaijani heritage is common knowledge within the country.

Nevertheless, it is in Iran’s provinces where ethnic identity remains the strongest and most politically active, which is why those regions represent a threat to the country’s clerical regime.

Throughout Iranian history, Shaffer notes, “every time the center is weak, the periphery rises.” The situation is the same today. With the start of the current round of unrest in Iran in December 2017, Iran’s ethnic enclaves emerged as the most vibrant centers of resistance to clerical rule. In turn, the Iranian regime reserved some of its harshest repression—including mass arrests and state-sanctioned violence—for cities located in provinces where ethnic minorities predominate.

The brutality of the official response reflects just how deeply Iranian authorities fear the political activism and destabilizing potential of the country’s ethnic communities. They have good reason to do so; in recent years, radical ethnic movements in various provinces throughout the country have emerged as a major domestic security challenge for the regime in Tehran.

In Sistan-Baluchistan, which borders Pakistan, a low-grade insurgency has been simmering since the middle of the last decade. There, attacks carried out by militant Sunni Baluch groups like Jundullah and Jaish ul-Adl against regime targets have exacted a heavy toll. For instance, In October 2018, Baluch extremists abducted more than a dozen members of Iran’s clerical army, the Islamic Revolutionary Guard Corps (IRGC), in the province. A subsequent February 2019 attack on an IRGC convoy transiting the region left nearly thirty dead. Such violence, moreover, has persisted despite a 2014 understanding between Iran and Pakistan under which both countries committed to stepped-up counterterrorism cooperation along their common border.

Iran’s majority Kurdish regions of West Azerbaijan, Kordestan and Kermanshah are similarly restive. Over the years, Iranian soldiers have become regular targets of attacks in those places carried out by local radicals, often in cooperation with sympathetic elements across the border in Iraq. The most prominent actor in this regard is the Kurdistan Free Life Party (PJAK), a Kurdish separatist group linked to Turkey’s outlawed Kurdistan Workers Party which waged a pitched military campaign against the Iranian regime elements in the region between 2004 and 2011. This group has sporadically clashed with regime forces since then.

Iran’s eastern province of Khuzestan, meanwhile, is the site of significant separatist activity on the part of the country’s Arab minority. The region has a long history of social activism dating back to the 1920s, but in recent years the situation has become more heated, in part as a result of the activities of an insurgent group known as the Arab Struggle Movement for the Liberation of Ahvaz (ASMLA).

Between 2005 and 2015, large-scale civil unrest broke out in the province, mirroring the ethnic turmoil then occurring elsewhere in the Islamic Republic. While that ferment has abated somewhat since then the potential for large scale violence remains. In April of 2018, mass demonstrations erupted throughout Khuzestan, with the resulting clashes with authorities claiming scores of lives. And that September, a group of terrorists attacked a military parade in Ahvaz, killing nearly thirty soldiers and civilians in the most significant incident of its kind within Iran in recent memory. Shaffer points out that the instability in Khuzestan is particularly worrisome to the regime since it is located at the center of the country’s oil production.

It’s no wonder, then, that Iran’s leaders are distrustful of the country’s ethnic minorities, and all too eager to suppress them. Authorities have long applied more discriminatory policies and stricter security measures in heavily ethnic provinces than elsewhere in the country. In his most recent report, Javaid Rehman, the UN’s Special Rapporteur on Human Rights in Iran, laid out in damning detail precisely what form this persecution takes. The regime, Rehman outlined, is responsible for “the arbitrary deprivation of life and extrajudicial executions; a disproportionate number of executions on national security-related charges; a disproportionate number of political prisoners; arbitrary arrests and detention in connection with a range of peaceful activities such as advocacy for linguistic freedom, organizing or taking part in peaceful protests and being affiliated with opposition parties; incitement to hatred and violence; the forced closure of businesses and discriminatory practices and denial of employment; and restrictions on access to education and other basic services.”

Worries over ethnicity even permeate the regime’s internal organization. In much the same way the Soviet Communist Party in its day managed the inherent risk posed by the diverse ethnicities that had been drawn into the USSR, Shaffer says, great pains are taken today at the official level in Tehran to ensure that soldiers in Iran’s military do not serve in the province of their core ethnicity. In this way, the Iranian regime seeks to mute any residual identity that might supersede loyalty to the state, should push come to shove.

If it does, however, then Iranian authorities will have some unlikely allies: ordinary Iranians themselves. For most, national unity is a paramount concern, and many would prefer a united country—even one under clerical rule—to a fragmented post-theocratic nation. For this reason, ethnic politics represent something of a third rail in any discussion of Iran’s future. Even ardent opponents of the current regime make abundantly clear that they would back the existing status quo if the alternative was a breakup of the country along ethnic lines. Iran’s clerical regime, in turn, has exploited these fears, disseminating messages that emphasize that only it has the capability to prevent such a situation.

It is also the reason why Iran’s disparate opposition groups have spent so little time discussing the plight of the country’s ethnic minorities, beyond general promises of equal treatment in whatever order emerges after the Islamic Republic’s collapse. Underlying this laissez faire attitude is an uncomfortable reality: ensuring that Iran’s assorted ethnic groups are content, engaged and committed to keeping the country intact are among the most pressing tasks facing anyone who hopes to rule this nation of nations after the ayatollahs.

Ilan Berman is the senior vice president of the American Foreign Policy Council in Washington, DC. This piece is the seventh in a series of articles exploring the beliefs, ideas and values of different factions within the Iranian opposition, as well as the challenges confronting them.