Iran's Nuclear Archives Must Not Be Ignored 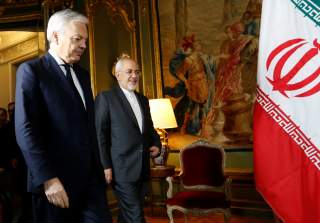 In her March 5, 2019, statement to the International Atomic Energy Agency (IAEA) Board of Governors on the subject of monitoring and inspection in Iran, U.S. Ambassador Jackie Wolcott stated that “[t]he United States welcomes the Director General’s February 22 report on verification and monitoring in Iran. We once again extend our appreciation to the Director General, and . . . [his] staff for their continued dedication in carrying out their responsibilities in Iran. . . . The Director General’s thorough reporting on Iran’s nuclear activities remains essential for the Board to continue accurately assessing Iran’s implementation of its safeguards obligations and nuclear commitments.”

Unfortunately, the implication of this statement is misleading. IAEA inspections are taking place, but only in facilities that have been pre-declared to the IAEA and are mentioned in the Joint Comprehensive Plan of Action (JCPOA) or Iran Deal. The IAEA is trying to avoid provoking Iran by not making requests regarding facilities and activities that became known to the IAEA through information received from outside sources—certainly not from the treasure trove of information about Iran’s military nuclear plans that is contained in the Iran nuclear archives, which Israel took from the heart of Iran and made available to the IAEA in early 2018.

The Iran nuclear archives are important for many reasons, not only because the documents could prove that Iran is still engaged in illegal nuclear weapons work today. Rather, the archives are significant because they allow us to gain a better understanding of what Iran actually did in the past in the nuclear realm; they tell us about the people who worked on the military program, where they were doing it, which equipment they were using, and how Iran succeeded in deceiving the IAEA from 2003, which is when it reorganized its weapons program and took it deeper underground.

The immediate claim made by some states that everything was already known to the IAEA is also untrue. As is clear from reports published by the Institute for Science and International Security (ISIS)—whose president has seen and assessed significant portions of the archives—the depth and breadth of information in the documents goes well beyond what was in the hands of the IAEA, under the heading of the “Possible Military Dimensions” (PMD) of Iran’s nuclear program.

The purpose of the examination of the archives—according to ISIS reports—is to improve inspections and verification, to challenge Iran’s deceptive reporting, and to devise better policies for dealing with Iran down the line. The information in the archives demonstrates that the 2007 U.S. National Intelligence Estimate (NIE) was wrong in assessing that Iran had probably ended its weapons program in 2003; it also shows that Iran was much more advanced regarding its military plans in the nuclear realm than reflected in the IAEA report on the PMD that was issued in December 2015.

The ISIS reports also detail the key points of Iran’s deception over the years. Perhaps most telling is the existence of “deception folders” in the archives—documents that actually catalogue Iran’s lies to the IAEA inspectors so that in future interactions with the agency they do not show a lack of consistency.

In her statement to the IAEA Board, Ambassador Wolcott explained why the United States ended its participation in the JCPOA and said Iran needed to return to the negotiating table in order to conclude “a comprehensive agreement with Iran that addresses the totality of our concerns.” Such an agreement would lead to Iran being fully integrated politically and economically into the international community.

The ambassador emphasized that in looking toward such an agreement, Iran would have to provide explanations regarding the nuclear archives. Iran would have to explain why it retained that information and expertise. She stressed that Iran must end its denials of past weaponization work due to the significance of this for future verification efforts: “The facts of Iran’s past nuclear weapons activities continue to have bearing on current questions about the possibility of undeclared nuclear material and activities in Iran. These issues must be addressed in a clear and straightforward manner, without further delay.” However, Wolcott then stated that the United States had “the highest confidence” that the IAEA would do what needed to be done with regard to the archives.

But is that confidence warranted, ten months after the archives were turned over to the Agency, without any inspections in line with the new information? It is notable that Director General Amano has expressed his reluctance to move forward quickly due to his apparent fear of possible accusations that he is not impartial and professional. In a statement released last October, Amano stressed that to be credible, the agency alone will decide what to do with material obtained from third parties. In late January, he took his message a step further when he stated that “if attempts are made to micro-manage or put pressure on the Agency in nuclear verification, that is counter-productive and extremely harmful.”

We beg to differ. The IAEA is not an independent organization that is free to do as it pleases. The Board of Governors is precisely that: a governing body. It is free to tell its employees what it wants to be done, but the director general is not free to ignore the wishes of the IAEA member states. If he chooses to do so, then he must present a rational explanation for actions or inactions and convince those who employ him of his arguments.

Having said this, no one disputes that it is the IAEA who must conduct the inspections and carry out the questioning of the Iranians involved in the project. But Amano seems to view his responsibility per the Iran case solely in terms of checking whether Iran is upholding the JCPOA. Needless to say, however, his mandate is also to ensure Iran’s compliance with the Non-Proliferation Treaty.

Many of the IAEA safeguards-related documents mention “conducting activities necessary to provide credible assurance of the absence of undeclared nuclear material and activities.” And in this regard, the nuclear archives are of critical importance. Moreover, time is of the essence when it comes to determined proliferators like Iran. The issue of lengthy IAEA processes, and the price that is often paid in terms of nonproliferation efforts, is unfortunately not new. Just imagine if in 2007, rather than bombing the North Korean-built nuclear reactor in Syria, Israel had turned over its intelligence to the IAEA.

The bottom line is that the IAEA must now conduct interviews and inspections regarding the archive documents. It is the continued delays by the agency, and denials by other states regarding the significance of the information contained in the archives (along the lines of “we knew everything already”), that are counterproductive to nonproliferation efforts regarding Iran. These trends seriously undermine any benefits of the JCPOA.

There cannot be any doubt that Iran had a production program dedicated to nuclear weapons. Iran still holds plans to build those weapons: including sites, materials, equipment and capabilities to resume this program at any time. The JCPOA only delays Iran’s nuclear ambitions. The IAEA’s manifest procrastination only helps Iran, and it is only through insistent inspection activity that the international community can delay, if not thwart Iran’s potential.