Iraq’s Turn toward the Mediterranean Is a Brilliant Strategic Move 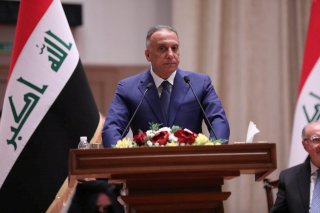 The most consequential Iraqi diplomatic move this past month may not have been Prime Minister Mustafa al-Kadhimi’s trip to Washington, DC, but rather his tripartite summit with Egyptian President Abdel Fattah el-Sisi and Jordanian King Abdullah II in Amman the following week.

The Washington meeting, which came after Kadhimi’s July trip to Tehran, was by all accounts successful. Kadhimi’s visit to the White House went off without a hitch—not an easy feat in the age of Trump—and ministers accompanying the Iraqi prime minister signed a number of important contracts to bolster Iraq’s important oil sector and enable Iraq to become more independent in electricity. Kadhimi also had a late but successful meeting with House Speaker Nancy Pelosi. George W. Bush’s decision to oust Iraqi dictator Saddam Hussein may polarize foreign policy debate in Washington, but Iraq today is a fundamentally different country: More than 40 percent of Iraqis were born after the 2003 war and, for well over a decade, the discussions in which Iraqis engage have been fundamentally different from those Americans debate when it comes to Iraq. To stand next to Pelosi is to signify a new diplomatic era where practicality can trump polemic.

That Baghdad seeks to balance its relationship between Tehran and Washington is nothing new. Both Iran and the United States regularly intrude on Iraqi sovereignty. Americans traditionally underestimate the psychological importance of occupation while Iranians underestimate Iraqi nationalism. While both American and Iranian officials may fantasize about the absence of the other, the reality is messier: Iraqis can carve space for independent action only when Iran and the United States deter each other.

The balancing act between Washington and Tehran is not Kadhimi’s only concern. Iraq is also frequently drawn into the rivalry between Iran and the Gulf Arab states that is driven by geography, ethnicity, religion and, since Iran overthrew its monarchy in 1979, governance as well. During the Iran-Iraq War, every Arab state except for Syria sided with Iraq. Saddam Hussein’s 1990 invasion of Kuwait eroded Gulf support for Iraq was not enough to send the Gulf states into Iran’s embrace.

After Saddam’s ouster, Gulf posture changed. Saddam may have sought to use the dispute with Kuwait to his own advantage, but he did not originate it: On a popular level, many Iraqis resent Kuwait as an artificial entity born of British cynicism and blessed with oil that Iraqis believe should rightfully be theirs. (Many Gulf Arabs dislike Kuwaitis as well). That said, while the sectarian lens through which so much Western analysis regarding Iraq occurs is tired and increasingly irrelevant, Iraqi democracy did and will continue to empower Iraq’s diverse Shi’ite community. Many Gulf states and, for that matter, King Abdullah II of Jordan rejected this empowerment and several--including perhaps King Abdullah II—sought to reverse it by funding or empowering insurgency. Even after the United States formally restored Iraqi sovereignty, many Arab states refused to return their embassies. In effect, while Arab states complained about growing Iranian influence in Iraq, it was a self-fulfilling prophecy as they refused to compete for their own influence.

That was a lost opportunity, because Gulf Arabs had a stronger hand than many realized. Basra is culturally khaleeji [“Gulfie”]; its economy has historically been more linked to trade around the Gulf as it is to Baghdad. Iraqis regardless of sect also resented Iran’s dumping of cheap manufactured goods which further undermined Iraq’s industrial rebound. They would have welcomed Gulf investment. That said, post-2003 Iraq is democratic—Iraqis have become notoriously unforgiving of incumbency—and so the gap in political culture between Baghdad and the Gulf autocracies has grown.

Kadhimi is both a technocrat but also an intellectual. He is guided more by nationalism and a sincere desire to set Iraq on a firm future foundation than he is by party considerations. Absent any real constituency, he acts on behalf of the nation as a whole and does not allow outside interests to constrain options.

Hence this past week’s summit: By turning toward Egypt and Jordan, Kadhimi is doing two things. First, he is side-stepping both the U.S.-Iran and the Iran-Gulf Arab rivalries. Rather than be a political football between rival blocs, Kadhimi simply refuses to encourage the competition. Rather, he seeks to ensure that Iraq is valued as an equal player rather than a scrap to be fought over. True, both former Egyptian leader Hosni Mubarak and Abdullah II played the sectarian card but, in recent years, they have not driven it. It now appears they accept that Iraq is not an Iran puppet and they recognize that cooperation trumps obstruction. Iraq can be an indispensable part of a moderate bloc.

Kadhimi is also helping advance Iraq’s longer-term economic prospects. Iraq is rich in theory, but decades of poor and populist governance has hobbled the country. While Iraqis would welcome American and Gulf investment, that trade is often unidirectional. By partnering with both Egypt and Jordan, Kadhimi can tie Iraq to a far greater market and ensure that trade can build a middle class.

Perhaps even more so than oil, Iraq’s greatest asset is its people. Iraqi interests need not end at the Mediterranean or at the boundaries of the Arab world.  Time is running out. Iraq’s post-2003 war generation is preparing to enter a labor force that cannot at present sustain them. Kadhimi is aware that as Greece rebounds from its fiscal woes and Cyprus from COVID-19 devastation of its tourism industry, both can find mutual profit with Iraqi human capital. Turkey’s aggression in the Eastern Mediterranean creates Greek and Cypriot reluctance toward hiring Turks; Iraqis do not face these constraints. Culturally, Greeks and Cypriots are comfortable with the Arab world. There is no reason why Iraq should not try to seek an advantage from what could be a win-win situation.