The Iraq Exit Strategy Will Not Work in Afghanistan 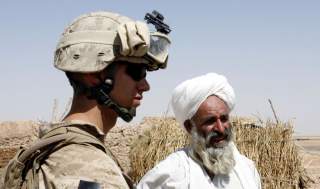 Last week, President Trump announced the withdrawal of U.S. troops from Syria, fulfilling his oft-repeated promise to get America out of “dumb wars in the Middle East.” Along with that announcement was a message to start planning a withdrawal from Afghanistan. Early indications are that more than 7,000 American troops—out of 14,000—will return home soon. And probably sooner than the Pentagon would want.

While the move no doubt undercuts the Afghan government’s position in the ongoing peace talks with the Taliban, President Ashraf Ghani claimed it would not impact security in the country. Afghan military generals did not agree with this assessment, saying the move would be seen as a defeat. Indeed, the Taliban reportedly reacted with “cries of victory.”

In any case, Trump’s decision to pull out of Afghanistan demands a transition strategy which is more than President Obama’s 2011 promise for a “responsible withdrawal” from Iraq or President Trump’s December 2018 withdrawal announcement. The strategy must ensure that security conditions in the country will not unravel dramatically soon after the American departure and that the sacrifices of the last seventeen years are not for naught. Some analysts, looking for a quick fix solution, have already suggested a the post-2011 Iraq strategy. But it’s not the right strategy.

American military sources will readily concede that the Iraqi strategy from 2003-2011 did not work. The “Surge,” while tactically successful in breaking the back of the insurgency, was not followed by equal success in building an Iraqi security establishment which could survive the departure of U.S. forces. Corruption, a lack of training, poor leader selection and a sectarian-based assignment of units to cities such as Mosul significantly degraded its capability. This was put on full display in 2014 when the Iraqi Army and Interior forces abandoned the battlefield to an ideologically-driven but militarily slapdash invasion by Daesh (ISIS). Yet, by 2017, the country declared victory against the terrorists which today remain no more than a localized terrorist organization—hardly the significant, almost existential threat it posed to Baghdad in 2014.

While many factors came into play, three stand out as most consequential to the Iraqi success. First, when the military failed to stop Daesh from moving virtually uncontested towards Baghdad and the politicians had no answers, the clerics stepped in. Iraq’s religious Marjiyah establishment issued fatwas for young men to rise and join the militias, and they did. Iran, too, was ready to help, preferring support to militias as a means to prevent instability on its borders. When the military abandoned the battlefield, the militias (and the Kurds) stood firm. Along with the militias, Iraq’s capable (but small) Counter Terrorism Forces (CTS), was put at the vanguard of offensive operations. Its record of battlefield success has no parallel. They liberated town after town in the multiyear campaign and took staggering casualty rates in the process.

Second, the Iraqi military was purged of its corrupt, politically connected leaders who had been installed by former Prime Minister Nouri Al-Maliki. One of the most significant factors in Daesh’s initial success came about from a supportive Iraqi population who had been brutalized by the Iraqi military and police since the departure of the U.S. forces. Once those Iraqi forces were swept from the battlefield, numerous leaders were fired, replaced and, in some cases jailed.

Third, Daesh overplayed its hands and lost the support of the citizens of their self-proclaimed caliphate. While the Iraqi military and police had antagonized the locals, the well-documented cruelty and brutality of Daesh quickly turned the population against them. Before too long, the locals became informants, intelligence sources and military spotters for both the Iraqi military and coalition aircraft.

Victory in Iraq does not mean victory in Afghanistan

None of the conditions essential to success in Iraq “travel well” to Afghanistan and cannot be incorporated into a new Afghanistan strategy post-U.S. withdrawal.

First, there is no existential crisis which would cause either a unified Afghan campaign or inspire a call to arms among the people. In Afghanistan today, military service is on volunteer and salaried basis and with such high rates of illiteracy (31 percent), unemployment (40 percent) and poverty (55 percent), only the poorest from remote regions sign up. Their performance in battle has been lackluster and their willingness to fight is driven (for the most part) by a paycheck, not an ideology or threat. There is no organizing principle, no call to the barricades, no need for a levée en masse to turn back an invading force as was the case in Iraq.

Nor have the Taliban committed the atrocities of Daesh. While it may be unfair to oversimplify the terror landscape in Afghanistan as several newcomer groups are there, it is not entirely inaccurate to say that there remains a degree of sympathy for the Taliban in the hinterlands. Daesh may have been initially embraced by the locals but went too far. The Taliban are not seen as an existential threat to the country and retains some support among the people. Many Afghans, mainly in the south and the east of the country, do not reject the Taliban and don’t have a problem making peace with them.

In fact, the Taliban often win the battle for the population’s hearts and minds because the United States and its allies have always opted to empower the worst of the local strongmen who, like the pre-Daesh military and police in Iraq, have exploited and oppressed local populations. And, up to this point, the Afghan government seems unwilling to purge the ranks of leaders who either fail in combat against the Taliban or fail in winning over the local population.

Attempting to take a cookie cutter approach from Iraq to Afghanistan is fraught with danger and likely unsuccessful. The British military uses a term “Appreciation of the Battlefield” to force a rigorous understanding of the situation before developing a strategy. In the case of Iraq and Afghanistan, any first-year cadet at Sandhurst would see the difference of the situation and the danger of strategic duplication.

The greatest danger to Afghanistan is that an orderly withdrawal is followed by a disorderly rout. After the U.S. departure from Iraq in 2011, the country was ignored by the United States and by 2014 the military was in shambles. A rag-tag collection of ideological fighters on the back of pickup trucks was able to rout one of the best-equipped militaries in the Middle East. Despite a vast technological superiority including hundreds of M1 tanks, dozens of F16 fighters and hundreds of thousands of troops in uniform, the Iraqis were swept off the battlefield in weeks.

The United States will need to remain committed to Afghanistan. It cannot walk away. It must retain some influence if it wants Afghanistan to stay in the hands of an elected government. And U.S. Department of State’s Special Representative for Afghanistan Reconciliation Zalmay Khalilzad’s position has now been severely undermined. Why should the Taliban bother negotiating with the U.S. envoy when the U.S. president has essentially handed them what they’ve been fighting for since they resurfaced—the removal of U.S. presence? Time has always been on the side of the Taliban; they always knew they could wait out the Americans and they may be proven right if America gets it wrong. Leaving Afghanistan in 2019 as the United States did in Iraq in 2011 is wrong. And the post-2014 Iraq model is wrong.

The imperative for Afghanistan is the same one Professor Eliot Cohen wrote in 2003 regarding Iraq in his seminal article “If We Cut and Run.” His conclusion, still haunting fifteen years later, declared:

“Cut-and-run cannot be disguised, and the price to be paid for it would be appalling. No one else would take on the burdens of Iraq; talk of handing it over to the United Nations or NATO is wishfulness, not strategy. Whatever one’s view of the war’s rationale, conception, planning or conduct, our war it remains, and we had best figure out how to win it.”

American and NATO planners need to get working and get this right. There are plenty of right options, but mirroring the post-2014 Iraq strategy is, simply, wrong.

Tanya Goudsouzian is a Canadian journalist who has covered Iraq and Afghanistan for over 15 years. She is former Opinion editor of Al Jazeera English Online. Follow her on Twitter: @tgoudsouzian.​