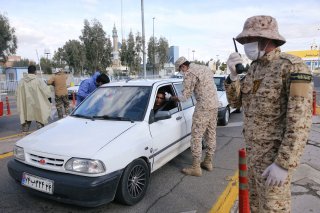 Iraq’s new prime minister-designate Adnan Al-Zurfi has about two weeks left to gain enough parliamentary votes to secure his position and form a new government. Once again, Iraq is struggling without a functioning government and there is formidable opposition to Zurfi.

Even if this political stalemate were the only challenge facing the country, it would be a crisis. But there are other conditions destabilizing Iraq, from the spread of the coronavirus to a New York Times report of a Pentagon campaign against Kataib Hezbollah, the most lethal Iranian-backed militia in the country, and the withdrawal of some U.S. troops from some Iraqi bases. Washington says the withdrawal is to guard against the coronavirus; Tehran and its allies in Iraq say it is evidence the United States military has been defeated against Iranian-baked militias, which persistently target U.S. military personnel.

As Zurfi’s time is running out, Iran’s most ardent operatives in Iraq are doing their best to make sure he fails. Al Zurfi has been labeled as an American ally at a time when Shi’a factions and political parties are divided. While Hadi al Ameri, the head of the powerful Badr Brigades, one of Tehran’s closest allies in Iraq, rejects Zurfi’s candidacy and is working toward his defeat to form a government, it must be understood that not all roads lead to Tehran.

Significant changes are occurring in Iraq that should be considered as any foreign government considers whether and/or how to help Zurfi form a government in order to try to bring about a modicum of Iraqi stability. First and foremost is that support among Iraqis for Iran is declining.  According to recent surveys from IIACSS, the most reliable polling institution in Iraq, the number of Iraqi Shi’a who see Iran as a trusted partner has dipped to its lowest point since 2003. Now, among those respondents surveyed, only 15 percent consider Iran a trustworthy partner. And the popularity among Iraqis for Iranian-backed armed factions has also dropped to its lowest level since 2014.

This is an important issue because one of the key points of conflict among Shi’a political factions as they decide whether to support Zurfi is whether he will try to rein in the militias— and succeed in doing so in ways other former prime ministers have failed.  Zurfi has made a distinction between his opposition to Iranian military activities and his support for humanitarian aid to the Iranian people. On March 30, Zurfi called upon the international community on his twitter account to help Iran, the epicenter of the coronavirus in the Middle East region, by lifting some U.S. sanctions. His seemingly measured approach gives political space to Shi’a parties and factions to support his candidacy.

The point here is that some Shi’a factions are supporting Zurfi. At the time of this writing, the Sarioon faction, led by the cleric Muqtada Sadr, seems to be supporting him, as is the Nasr coalition, led by former Iraqi prime minster Haider al Abadi. Some Sunni and Kurdish parties and factions—fearful of reprisal by Iranian-backed factions—are waiting on the sidelines to see if the Shi’a fragmentation will work in Zurfi’s favor. If they conclude yes, then they will likely throw their parliamentary support his way, pushing him one step closer to the premiership.

It is entirely possible that the fragmentation among Shi’a politicians is an indication that some are becoming more in step with the proverbial Iraqi Shi’a street. Sadr’s coalition, for example, has lost popular support because Sadr disavowed the protest movement, which has been ongoing in Iraq since October 2019. Awareness of their unpopularity, however, does not necessarily mean Shi’a leaders will try to address the protestors’ grievances, which are focused on government corruption, unemployment, lack of democratic-style governance and government dysfunction that has led to inadequate public services.

Meanwhile, Tehran is doing its bidding with Iraq’s political class, as it often does. On March 31, the commander of Iran’s Quds Force, Esmail Ghaani, visited Iraq and met with Shi’a leaders to discuss Zurfi’s candidacy. According to Arabic media reports, Ghaani assured the leaders that Tehran will refrain from interfering in Iraq’s internal affairs—a typical slogan from Tehran that often rings hollow. He also said Iran opposes any candidate opposed to Iran—a reference to Zurfi.

Western governments should take this on board as decisions are made whether to support Zurfi’s candidacy. But there is another broad issue that could affect what happens in Iraq:  whether the United States or any other Western government provides humanitarian aid to the Iraqi and Iranian governments, as they continue to fail to contain the spread of the coronavirus.

The Trump administration has vowed to keep up the “maximum pressure” campaign on Tehran no matter how many Iranians die of the coronavirus. Some Western scientists predict millions could die in Iran due to antiquated medical technology, lack of medical treatments and government corruption. U.S. sanctions are definitely an impediment to the Iranian government’s ability to buy medicines and equipment.

Zurfi could be Iraq’s chance to regain a degree of stability, if not in the long-term, then in the short- term. It is time for creative diplomacy to figure out how to assure his survival.

Geneive Abdo is a visiting fellow at the Brookings Doha Center and the author of four books on the Middle East, most recently The New Sectarianism: The Arab Uprisings and the Rebirth of the Shi’a-Sunni Divide (Oxford University Press).