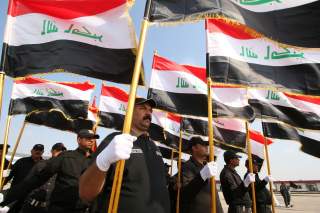 The skeptics questioning whether Saudi Arabia’s conspicuous overtures during the last year and a half to improve bilateral relations with Iraq will bear fruits, after twenty-five years of estrangement, may now have to reconsider their doubts.

Saudi Arabia and Iraq are engaging in a flurry of activity that is proof both sides are now fully on board efforts to establish stronger ties. Saudi Arabia opened a consulate in Baghdad April 4th. Perhaps the most geopolitically significant gift to date from the Saudis is a promise, reportedly made on April 4, to hook Iraq up to the Saudi electrical grid as part of a Saudi investment project.

Prime Minister Adel Abdul-Mahdi is planning an official visit to the kingdom April 17, according to media reports. And, trade delegations are shuttling back and forth between the two countries.

The Shia-dominated Iraqi government has much to gain by developing better relations with Sunni-ruled Saudi Arabia. Despite growing domestic opposition to Iranian interference, Baghdad may not be able to curtail Tehran’s military might inside Iraq. However, Saudi Arabia and its Arab allies could help reduce Iraq’s economic dependence on Iran. For the Middle East, recently engulfed in sectarian wars in Syria and Iraq between Shia and Sunni, the budding rapprochement is a particularly significant sign that geopolitics trumps sectarianism. Saudi Arabia understands that the wisest strategy for competing with Iran in Iraq is through a smaller footprint, one that is based upon economic, not military or political, ties.

“The Saudi side recently has shown great flexibility and understanding of the political transformations taking place in Iraq and in the region,” Dhia al Asadi, an Iraqi politician and academic, said in an interview.

Assuming the Saudi pledge of supplying electricity, as well as natural gas, comes through soon, the Iraqis will be able to avert a number of crises. Electricity shortages—blackouts and brownouts—are rampant throughout the country, but particularly severe in the south and in the predominantly Shia city of Basra, which is close to the Saudi border. Electricity shortages are a main source of Iraqis’ discontent with their government, whose corruption and mismanagement they hold responsible for the repeated outages. Demonstrations in Basra have been ongoing since the electricity shortages of last summer, when Iran, which is the primary supplier in the city and across Iraq, unexpectedly cut the electricity. Iraqi officials are bracing for another hot summer of protests that would likely be worse than last year because some activists in Basra are more radicalized than in the past.

The new government in Baghdad walks a tightrope between appeasing Iran, the dominant power broker in Iraq, and capitalizing on new opportunities from Arab Gulf states, such as Saudi Arabia. Iranian President Hassan Rouhani boasts that Iranian exports to Iraq could increase from $12 to $20 billion dollars in 2019.

But there is growing Iraqi support for Saudi help as an economic counterweight to Iran. Even those Iraqi political elites who are not adamantly opposed to Iran’s deep imprint on their country agree that Tehran has become too domineering since U.S. sanctions were re-imposed in November 2018. This is because Iran’s economic dependence on Iraq is increasing as European and other markets close to it.

For Saudi Arabia, reversing its previous absence on the Iraqi scene is of vital importance, not only because of Iran’s growing hold over a neighboring country, but also because of joint Saudi-U.S. efforts to preclude an ISIS revival. For the kingdom, ISIS is not only a security threat in its own right, but an excuse for the Iranian-backed Shia militias, which operate outside of both Baghdad’s and the Iraqi armed services’ control, use to maintain their autonomy and to engage in military activities as they see fit.

As one senior Saudi security official recently explained to one author of this article in Saudi Arabia: “ISIS will surely make a comeback if we’re not smart. Its recent defeat in Syria was important, but Syria is a side show, the heart of the ISIS problem has always been in Iraq.”

To that end, the Saudis are actively engaging Iraq’s disenfranchised Sunni Arabs, from which ISIS has drawn much of its support in the past. These include the tribes of Iraq’s Anbar province, ground zero for the Sunni insurgency during the U.S. occupation, but also home to the “Anbar Awakening,” which ultimately proved vital for the U.S. defeat of Al Qaeda.

However, despite tribal affinities that stretch across the border, Riyadh’s ability to influence Iraq’s Sunni community is being actively contested, not only by ISIS, but also by the rival Arab Gulf State of Qatar.

Counterintuitively then, Saudi Arabia may have a better chance of influencing political outcomes amongst Iraq’s Shia majority. “There are low hanging fruits (for Saudi Arabia in Iraq) including many Shia growing increasingly unsatisfied with the current Iranian-backed political reality,” stressed a senior Saudi official working on Iraq. The list of the disenfranchised may include ranking Shia officers in the Iraqi military, who have grown tired of Iran’s sponsorship of militias undermining their authority.

Even among these militias there are opportunities for Saudi Arabia to exploit, given the fractious nature of Baghdad politics and some of the difficulties Iran is having in managing Iraqi politicians. For example, the maverick cleric Moqtada al Sadr, who wields a paramilitary force, continues to distance himself from Iran and paid a landmark visit to Saudi Arabia in July 2017. Sadr has the ability to play kingmaker and saboteur, and although fickle, some in Riyadh now see him as a useful obstacle to Iranian domination.

Sadr has said all foreign intruders—namely Iran and the United States—must leave the country. But Iraqi sources say the sometimes-capricious Sadr should not be trusted and that the Saudis should find other, more reliable, Shia allies. The most logical choice is Ayatollah Ali Sistani, a staunch opponent of Iranian interference in Iraq. In fact, when Iranian president Hassan Rouhani visited Iraq in March, the only public criticism he received was from Sistani, who issued a statement following their meeting which reported the cleric told Rouhani that Iran must respect Iraqi sovereignty.

However, the dilemma for Sistani, who is considered the strongest Iraqi figure resisting Tehran, lies in the fact that any direct gestures he makes toward the Saudis, even in private, are too politically risky for him. With millions of Shia followers, Sistani would seem disloyal to embrace a country that once abetted, if not encouraged, Sunni Salafist clerics who promoted anti-Shia campaigns.

But Saudi Arabia today is adopting a much more pragmatic approach, with senior officials eager to help Sistani and other Shia leaders who enjoy a margin of independence from Iran. And while it remains unclear how such a relationship can be fostered given the sensitivities, it is safe to say that both sides now recognize their mutual interests and have a desire to cooperate.

While Saudi Arabia realistically cannot entirely reverse Iran’s dominance in Iraq anytime soon, the visit of Iraq’s Abdul-Mahdi to the Kingdom later this month and the Saudi investments and aid have certainly placed the relationship on a positive footing. In addition, economic development projects in Iraq and aid will make Iraq stronger, more stable, and more independent—something the Iranians oppose. For Iran, which wants an Iraq which is not too weak to collapse, but not too strong to challenge it, Saudi Arabia’s increasingly significant forays into the Iraqi economy is a serious impediment.

Still, as Iraqi sources noted, Saudi inroads will take time. “The road is still long for Saudi Arabia to succeed in changing the stereotypes and become effective and influential and competitive in its regional environment,” al Asadi, the Iraqi politician, said.

Firas Maksad is the director of the Arabia Foundation.​