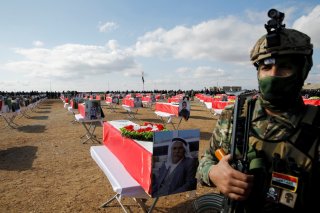 On February 6, the remains of 104 Yazidis killed in northern Iraq by the Islamic State (ISIS) in 2014 were brought home and laid to rest in the village of Kojo. These Yazidis were killed six years ago when ISIS forces viciously attacked Iraq’s northern province of Sinjar. The Yazidis who attempted to flee to a nearby mountain range were besieged by ISIS militants and tortured or murdered.

It is estimated that out of the 550,000 Yazidis living in Iraq prior to the 2014 ethnic cleansing campaign, ISIS forces killed more than 3,000 men, enslaved over 7,000 women and children, and displaced those who were able to escape or seek refuge. The devastating scope of this UN-recognized genocide is still being discovered today. More than eighty mass graves have been uncovered in Sinjar and thousands of Yazidi women and girls remain missing.

The Kurdish-speaking Yazidis practice a unique religion rooted in Zoroastrianism that includes elements of Judaism, Christianity, and Islam. The Yazidi community, among other ethnoreligious groups in Iraq, has endured persecution throughout its history. It has been estimated that the Yazidis have survived over seventy genocides as they refused to denounce their religion in the face of persecution under the Ottoman Empire and in Iraq during the twentieth century.

The Yazidi population in Syria, among other minority groups, has suffered a similar fate under the wrath of extremist groups in the region, including by Turkish-backed militias. In January 2018, the Turkish-backed Free Syrian Army launched a military operation dubbed “Operation Olive Branch” in the northwestern Syrian province Afrin. This region is controlled by a Syrian-Kurdish rebel group backed by the United States, the People’s Protection Units (YPG).

Turkey regards the YPG as an extension of the Kurdistan Workers’ Party (PKK), a Kurdish-Turkish rebel group that has been fighting for Kurdish autonomy in Turkey for decades and has been designated a terrorist organization by Turkey, the United States, and the European Union. However, the YPG denies being an extension of the PKK and is regarded by the U.S. government as an essential ally in the fight against ISIS.

During Operation Olive Branch in 2018, hundreds of civilians were killed as Turkish militias dropped bombs and shelled entire villages indiscriminately. Many of the civilians slain were Yazidis and Christians displaced by earlier ISIS campaigns in Iraq who fled to Afrin for refuge. Following this brutal campaign, an estimated 100,000 civilians, including 6,000 Yazidis were forced to flee Afrin into refugee camps in neighboring cities. Ankara rationalized launching this operation as retaliation for the “700 attacks that have been launched under the YPG” according to a Turkish presidential spokesperson. In reality, fifteen attacks originated in Afrin the year prior to Operation Olive Branch.

Turkish President Recep Tayyip Erdogan has a history of using unconfirmed “threats” to justify launching operations in Syria and Iraq. On February 5, the day before the burial of the 104 Yazidis in Iraq, the Syrian Observatory for Human Rights reported that Turkish forces have shelled and launched airstrikes targeting villages north of Aleppo. These villages are home to some of the thousands of Yazidi minorities that were ethnically cleansed in Afrin and forced to seek refuge in neighboring districts.

According to the Jerusalem Post, a commissioner with the United States Commission on International Religious Freedom (USCIRF) stated that “thousands of Yazidis who fled Afrin and now reside near Aleppo are currently under airstrikes by Turkey.”

Although the Islamic State lost almost all its physical territory in 2018, the terrorist group has continued to claim responsibility for recent deadly attacks across the globe. Following a devastating bombing that killed dozens of civilians in one of Baghdad’s outdoor marketplaces in January 2021, American airstrikes in a joint operation with Iraqi security forces killed the leading ISIS official in Iraq, Abu Yasser. While the United States and the international community continue to fight the Islamic States’ resurgent efforts, Turkey cannot be ignored. The international community must call out the atrocities Erdogan’s military forces are sustaining against vulnerable minority groups.