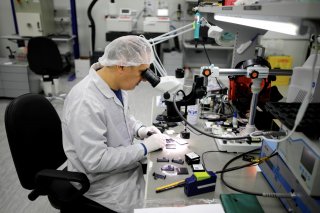 Tensions between the United States and China continue to escalate amid the coronavirus crisis and show no signs of abating. One long-standing rivalry surrounds the race to control emerging technologies that will shape the future. To improve its position, America should intensify collaboration with allies who are technology trailblazers, like Israel. Establishing a permanent forum to oversee joint ventures, while elevating intelligence relations and addressing concerns about China, could help both Washington and Jerusalem preserve their Qualitative Technology Edge (QTE) for years to come.

The United States and Israel are both innovation powerhouses. According to OECD data, America led the world in gross domestic spending on research and development (R&D) in 2018, while Israel led in spending as a percentage of GDP. Such investments over the decades have contributed to the growth and competitiveness of the American and Israeli economies. Through pioneering defense and dual-use technologies, they have also helped the United States and Israel maintain their QTE—their ability to protect national security through superior capabilities.

Yet there are concerns that America’s QTE is increasingly being challenged. China has dramatically grown its own R&D spending in recent decades and pursued emerging dual-use technologies like robotics and artificial intelligence (AI). As Defense Secretary Mark Esper suggested in January, China aims to leverage such technologies to “reshape the world in their favor, and often at the expense of others”—for instance, by deploying AI capabilities to repress minorities, or exporting 5G networks to gain a unique cyber presence within different countries that might be abused for military, economic, or political interests.

In its 2017 National Security Strategy, the Trump administration acknowledged the importance of maintaining the U.S. “innovation and technological edge” to protect “American prosperity and power.” It pledged to "nurture a healthy innovation economy" that, in part, "collaborates with allies and partners." Fortunately, America’s top ally in the Middle East has long understood that innovation and collaboration are vital to security.

As a small country beset with threats, Israel heavily relies on technological advantages. Yet the challenges it faces constantly transform, forcing it to develop new solutions—whether to defend against Iranian cyberattacks or tunnel warfare by Hamas. These unique circumstances, and the deep ties between the country's defense and civil innovation sectors, have birthed a robust technology ecosystem.

While the coronavirus crisis continues disrupting the global economy, the impact on R&D spending—particularly related to innovative dual-use technologies—remains unclear. Now more than ever, it would benefit the United States and Israel to enhance their joint efforts to preserve their QTE. While significant U.S.-Israel cooperation already exists—for instance, on the Arrow and David's Sling missile defense systems, or joint anti-tunnel work—it is not uniformly guided. As Senators Tom Cotton and Gary Peters recently suggested, there is a need for "more systemic and institutionalized" U.S.-Israel R&D.

Washington and Jerusalem should establish a permanent umbrella body to oversee R&D collaboration, which could identify joint capability gaps, minimize duplication, and direct resources based on shared policy priorities. For instance, it could instruct the Israeli Directorate of Defense Research and Development (DDR&D) and American Defense Advanced Research Projects Agency (DARPA) to develop a new layer of defense against the ever-evolving missile threat. This body should particularly focus on emerging dual-use fields, like AI, augmented/virtual reality, and quantum information sciences.

Critically, jointly pursuing the most sensitive ventures would necessitate elevating intelligence relations, as outlined in 2018 by a JINSA task force chaired by Admiral James Stavridis, formerly NATO Supreme Allied Commander Europe. While the United States and Israel currently enjoy extensive intelligence cooperation to their joint benefit, Israel lacks formalized top-tier ally status. This can hinder it from accessing the most advanced U.S. technologies and discussing the valuable lessons it gains while deploying U.S. systems. Jerusalem should therefore be granted the same intelligence-sharing clearance afforded to the United Kingdom, Australia, Canada, and New Zealand under the “Five Eyes” agreement. This would not necessitate Israeli inclusion in the alliance, and could rather be pursued through an executive order or a limited mutual defense pact.

Israel, in turn, must pay more heed to long-standing U.S. concerns regarding Chinese access to sensitive infrastructure and technologies. As Secretary of State Mike Pompeo's recent whirlwind visit to Jerusalem demonstrated, the United States is in an intensifying standoff with China and expects its allies to demonstrate their support. Israel’s new unity government will need to scale back ties with Beijing that strain its relationship with Washington.

Taking these steps to ultimately improve R&D cooperation would considerably aid long-term U.S. and Israeli efforts to maintain their QTE. It would also help America’s partners around the globe to prosper without being dominated by an authoritarian force. It is in America’s interest to ensure that the balance of power on emerging technologies remains in its favor—and allies like Israel can make the difference.

IDF Maj.-Gen. (ret.) Yaacov Ayish is a former Israeli Defense Attaché to the United States and Canada, and former head of the IDF General Staff Operations Branch. He is senior vice president for Israeli Affairs at the Jewish Institute for National Security of America (JINSA).