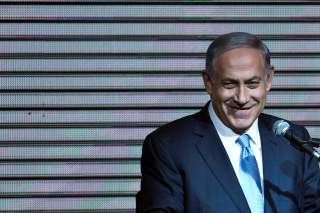 Amid the rat-tat-tat hum of matkot, Israeli paddle ball, two men pause their flailing rackets to ask Netanyahu what he is doing seaside. “Like always,” he answers, “guarding you.” “At sea, air, on dry land. In every place that’s needed.” Intercepting a whirling ball, he adds, “we must be prepared for every scenario . . . only you decide who will keep you safe.”

At the end of the spot, Netanyahu looks at the camera and says, “In the stormy seas of the Middle East, we have proven that we protect Israel as an island of stability and safety.”

With a masterful metaphor, Netanyahu reveals his keen ability to tap into the cardinal concern of Israeli voters: security. The advertisement’s message is simple: Netanyahu has kept Israel secure, and, needing to be prepared for “every scenario,” the country does not have the luxury of betting on another candidate.

Notwithstanding a maelstrom of legal woes, Netanyahu proved victorious in the April 2019 election, eclipsing Israel’s founder David Ben-Gurion as the country’s longest-serving prime minister. A key factor contributing to Netanyahu’s political longevity is his ability to assure voters that he safeguards them in perilous times in the world’s most perilous neighborhood.

Aware of this reality, to bolster party defense credentials, ex-military officials have returned to the vanguard of Israeli politics. Former Prime Minister Ehud Barak, the chief of the Left-leaning Israel Democratic Party, Benny Gantz, the leader of the centrist Blue and White party, whose other most visible senior members include Gabi Ashkenazi and Moshe Ya’alon, all at one point served as the head of the Israel Defense Forces. While centrist in name, on security, Gantz has claimed he will take a more hardline stance than Netanyahu, vowing to defeat Hamas once and for all. In fact, Blue and White even claims Netanyahu copied their plan to annex the Jordan Valley.

Particularly since the collapse of 1993 Oslo Accords, the failure of the 2000 Camp David summit, which devolved into the Palestinian’s latest deluge of terror, known as the Second Intifada, and the rise of Hamas upon Israel’s 2005 Gaza disengagement, Israelis have been moving rightward as the Left has turned into a shadow of its former self.

A year before the signing of the Oslo Accords, the Left’s flagship Labor party won forty-four seats in 1992, thirteen in 2009, and only six seats in the last election—the poorest results the party has ever seen. Labor and Meretz, the Left’s core, garnered sixty-six seats in 1992. In the previous elections, these parties mustered a mere ten seats together.

With defense at the forefront of the Israeli mind, the Left’s decline can be understood, at least in part, through this light. And yet, the nation’s preoccupation—and anxiety—that Netanyahu has successfully tapped into appears odd given that Israel is experiencing an unprecedented auspicious time.

Gone are the days of successfully blown up buses. Diplomatic bonhomie is flourishing in Latin America, Africa, and Asia, as relations have warmed with Sunni Arab neighbors over a common enemy in Tehran. In the past fifty years, Israel has transformed itself from a rather poor nation into one of the twenty-five richest in the world, in terms of per capita income. Since 2009, the discovery of immense natural-gas reserves off Israel’s Mediterranean coast has turned the country into an energy supplier at home and abroad. Israel’s fertility rate of 3.1 is greater than that of any other country in the developed world. Various television series created by Israelis are multiplying on Netflix. It is no wonder Israel is the thirteenth happiest country in the world.

But why do Israelis seem so worried about their security? Why does Netanyahu’s message resonate so poignantly with them when Israeli power and prosperity have never been better?

To understand the foundational security principles for much of Israel’s national psyche, one must begin nearly two thousand years ago with a majestic mountain top overlooking the Dead Sea in the Judean Desert.

Two events shape the Israeli collective consciousness. The first is of Jewish heroes who revolted against their Roman overlords, holed up in the desert stronghold of Masada. To die free rather than live as slaves, the story goes, they committed mass suicide in 74 AD. Masada turned into a powerful icon of patriotic resistance with the establishment of the Jewish state. Traditionally, when inductees join the Israeli Defense Forces, they swear: “Masada shall not fall again.” If Israel loses just one battle memory imparts, then Jews will wind up back atop the desert fortress facing homelessness or suicide.

The second is the Holocaust, which is one of the most substantial features of Israeli consciousness. Its impact felt daily in politics, culture and education.

More than historical events, Masada and the Holocaust, are rather, parts of Israeli collective memory, embodying the people’s national ethos. Indeed, the Hebrew language has no word for history. Modern Hebrew imported historia from Greek. Zikaron (memory), a personal reception of the past, however, is a recurring motif in the Bible. “Time has passed,” wrote one of Israel’s pre-eminent novelists A. B. Yehoshua, “and Masada is no longer the historic mountain near the Dead Sea but a mobile mountain which we carry on our back anywhere we go.”

Religious rituals are riddled with the history of Jews massacred and enslaved across all four corners of the earth by dictators, old and new. The Passover liturgy reads: “in every generation they rise against us to destroy us; and the Holy One, blessed be He, saves us from their hand.” When Israelis see Jews slaughtered in synagogues from Paris to Pittsburg, these words come alive. They also came alive as the whole nation mourned seventeen-year-old Rina Shnerb, killed in late August when a bomb planted by Palestinians exploded near a natural spring. Earlier that month, Palestinians murdered eighteen-year-old Dvir Sorek, himself the grandson of a Holocaust survivor slayed in the Second Intifada.

In May 2019, Hamas launched seven hundred rockets into Israel on one day alone. Israel’s strategy doctrine, though born from myth, is exacerbated by the Israeli experience. When a student near the Gaza border has fifteen seconds to run from her classroom to shelter from an incoming Hamas rocket, it is hard to think otherwise.

As such, security and survival harass the mind—and perhaps, for good reason.

Masada and the Holocaust circumscribe the possibilities of history. On the political level, this means the tangible risks of existential insecurity always loom over the prospect of the fruits of peace. While there have been moments in Israeli history when this insecurity has been overcome, such moments have required leaders with sterling security credentials and dramatic, symbolic breaks in the status quo, like Anwar Sadat’s visit to Jerusalem in 1977. They are the exception, not the norm.

Netanyahu understands all too well how such historical thinking sets an inescapable backdrop for the Israeli public. His father, Benzion Netanyahua, a professor at Cornell University, was the foremost academic of the Spanish Inquisition. In his 1995 work, “The Origins of the Inquisition in 15th Century Spain,” the elder Netanyahu’s scholarship posited that motivations for anti-Jewish persecution were racial as opposed to religious. Hence, anti-Semitism is not about how Jews behave, but their existence. Netanyahu’s brother, Jonathan, led—and lost his life in—the 1976 rescue raid to free 105 Jewish hostages held in Uganda by members of the Popular Front for the Liberation of Palestine.

Like those on Masada, the Jews of modern Israel feel themselves besieged. With Hezbollah, Assad and Iranian militias up north, Hamas and Islamic Jihad to the south, acts of terror from the West Bank, and other Iranian proxies rising in Yemen and Iraq, Israel is surrounded by enemies backed by the country which has made its intentions to destroy “little Satan” no secret. The Islamic Republic has stated clearly that it plans to destroy Israel in a long war of attrition, which it is now well positioned to do. Historical record demonstrates that Jews need to take self-proclaimed foes at their word, especially while an adversary actively denies the existence of the last attempt at the Jewish people’s extermination, and actively leverages its neighbors as missile launching pads. Israel only recently thwarted a deadly drone attack from Syria, directed by the head of Iran’s Islamic Revolutionary Guard Corps, which was to be executed by Lebanese Hezbollah fighters who underwent training in Iran.

Stretched across a small and narrow land comparable to the state of New Jersey in size, Israel has neither tactical nor strategic geographical depth—its home front is its battlefront. The country’s ability to absorb a wide military campaign, especially in the age of plunging missile fire, is limited because it cannot spread its vital infrastructure with enough redundancy. Even if the entire Jewish diaspora would make aliya, Israel will always be surrounded by engulfing countries more than ten to twenty times its size. Despite the state’s military might, and the fact that Palestinians are the party armed with stones, Israel will forever perceive itself as an insecure David fighting Goliath.