Israel's Support for the Chinese Military Could Harm the United States 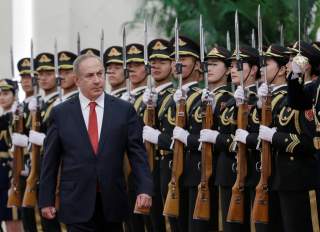 The votes are now all tallied and Israeli prime minister Benjamin “Bibi” Netanyahu has come out on top for a historic fifth term as Israel’s prime minister. Among Europeans, progressives, activists, career American diplomats and professional peace-processers, hand-wringing abounds. Shortly before elections, for example, Netanyahu promised to begin annexing portions of the West Bank and his government began planning for 3,600 new housing units in West Bank settlements. Bringing anti-Arab racists into his coalition and Netanyahu’s famous arrogance has only heightened anti-Bibi opprobrium among his critics.

For U.S. policymakers, none of this should be top concern. The annexation of some settlement blocs was something to which Palestinian negotiators agreed prior to the Camp David II Summit in 2000 and, according to both that draft agreement and Ehud Olmert’s 2008 peace proposal to Palestinian chairman Mahmoud Abbas, would be compensated for by land swaps elsewhere. As for the inclusion of Jewish Home-Jewish Power extremists, this reflects Netanyahu’s willingness to prioritize power over principle, but the rhetoric among some Arab parties aligning with the left is equally extreme and their positions equally racist. For better and for worse, democracy gives a voice to everyone.

When it comes to the peace process, it’s the same-old, same-old. If President Donald Trump and son-in-law Jared Kushner’s “Deal of the Century” turns out to be actually substantive, then negotiations will restart. If not, they will remain dormant. That is less on Netanyahu than on Abbas, who has never made a counter offer to Olmert’s 2008 plan. Regardless, the Arab Spring coupled with broader Arab rapprochement with Israel has underscored how the Israeli-Palestinian conflict is no longer central to peace, stability, and prosperity in the Middle East. The plight of Syrian refugees, China’s repression of Uighurs, and Libyan chaos are all more pressing.

It is one of Netanyahu’s other policies that should most concern U.S. policymakers and Congress. Netanyahu has prided himself on presiding over unprecedented diplomatic outreach and engagement with Asia. Fifteen months ago, I watched Netanyahu take the stage at the Raisina Dialogue in New Delhi, India, alongside his Indian counterpart Narendra Modi. The joint Raisina appearance capped a hugely successful nearly week-long visit to India. I have also been privileged to observe a Track II dialogue between Israeli intellectuals and academics and their counterparts across Southeast Asia: Indonesia, Thailand, Philippines, and even Malaysia.

As Europe and the West more broadly fall victim to a new wave of anti-Semitism and rejectionism most popularly manifested by the Boycott, Divestment, and Sanctions (BDS) movement and often European aid agencies support for Israeli rejectionism and sometimes even outright terrorist groups, it makes sense that Israel would pivot to the East. The problem with that pivot is Israel’s increasingly uncritical if not deluded relationship with China.

Israel has long suffered from a delusion that its high-tech sector mean that China, Russia, and other anti-Western dictatorships will treat it fairly or even prioritize Israel’s safety and security over that of its enemies. Netanyahu, for example, has long placed personal faith in the notion that Russian president Vladimir Putin can or will restrain Syrian president Bashar al-Assad, Hezbollah, or the Islamic Revolutionary Guard Corps, even as they continue to rearm and retrench.

With regard to China, Israel’s relationship is even more complex. From its very beginning, Jerusalem substituted sycophancy for sense. Israel was the first Middle Eastern country to recognize the People’s Republic of China as the single legitimate Chinese government, in the process throwing democratic Taiwan under the bus. Nevertheless, Israel’s overture to Beijing went unrequited. Arab states and Iran were more populous and, with their oil and gas deposited, of greater commercial interest to China. Beijing’s efforts to ingratiate itself toward Arab states and Iran was on full display at every UN session and yet Israeli officials held out hope that Chinese authorities’ hostility was only for show. Until the establishment of formal bilateral relations in 1992, China granted entry only to dual citizens traveling on non-Israeli passports.

The world is full of countries hostile to the Jewish state and yet willing to deal with it in the shadows. In such a situation, China’s reticence to treat Israel as normal is not a problem. Israel’s willingness to pretend that its bilateral ties do not impact broader Western security, however, is a problem. As President George H.W. Bush oversaw the end of the Cold War and President Bill Clinton spoke of a peace dividend, the Israeli weapons industry turned its attention to China as a potential customer. Israel helped upgrade Soviet tanks, and Israeli firms also sought technology initially developed for the Lavi jet fighter. The United States-China Economic and Security Review Commission subsequently reported, “Israel ranks second only to Russia as a weapons system provider to China.”

Sino-Israeli military sales have previously raised bipartisan ire in Washington. Twenty years ago, the Clinton administration intervened to scuttle Israel’s planned sale of the Phalcon early warning system—largely derived from AWACS technology—to China. That sale, largely developed during Israeli prime minister Benjamin Netanyahu’s first administration, was a diplomatic disaster for Israel. The Israeli government may have sensed an easy way to gain funds for its indigenous military industries but displayed an amazingly tin ear toward Washington’s concerns. Simply put, if the United States was ever to fight a major war, it would likely be with China. That Israeli officials did not recognize that every Pentagon official and most members of Congress would see the sale as benefiting an army poised to kill Americans displayed tremendous self-deception.

Israel eventually cancelled the Phalcon deal, but continued to display the same willful blindness to a country which bankrolls North Korea and is arguably America’s chief and most dangerous strategic adversary. In 2004, for example, the Bush administration threatened to exclude Israel from the F-35 Joint Strike Fighter program if Jerusalem did not abandon plans to upgrade an unmanned aerial vehicle (UAV) program it had previous sold the Chinese military. Weapons and technology transfers to China ultimately made most senior officials in the Israeli defense ministry unwelcome in the Pentagon.

Alas, the Netanyahu administration appears not to have learned any lessons. While since scrubbed from their website, in August 2012, the Israel Defense Forces [IDF] welcomed People’s Liberation Army ships into Haifa harbor. “The Vessels from the Chinese fleet, led by deputy commander of the northern Chinese fleet RADM. Yang Jun-fei, anchored in Israel to honor 20 years of cooperation between the IDF and the Chinese Army,” the IDF press release explained. While there is nothing wrong, in theory, with port visits even among adversaries, Israel’s subsequent willingness to let a Chinese firm run part of its port is deeply troubling. Bizarrely, visiting Israeli scholars and soldiers seem oblivious to the problem, believing they have more leverage over China than reality dictates, that Israel can prevent China from simply stripping and reverse-engineering technology transferred. Sino-Israeli trade continues to increase. A desire for trade and cash in Israel’s government simply reinforces the self-delusion that China will take the Jewish state’s diplomatic and military interests into account.

Even if China did, however, care about Israel, to aid a government like Beijing’s that seeks a qualitative military edge over the United States should be a redline that no Israeli government should cross. It is for this reason that Congress should make any U.S. military aid to Israel contingent on the Israeli government’s abandonment of all of its China military trade and on any other high-tech cooperation that could ultimately compromise American security or lead to the loss of American lives should conflict ever breakout in the South China Sea, Taiwan Strait, or elsewhere.

The world is becoming a more dangerous place, and Israel no longer is so isolated that it has to accept every arm outstretched toward it, as it did when it developed ties to Apartheid-era South Africa. It is time for the Netanyahu administration to decide whether it will support the camp of democracies struggling against an authoritarian resurgence or, through its trade policies, become like Recep Tayyip Erdoğan’s Turkey and seek to profit off autocracies who endanger liberal societies. It is this question and not the Palestinian peace process that should determine the future stance of the United States toward Israel.