It’s Time We Reassess Our Misguided Relationship With Saudi Arabia 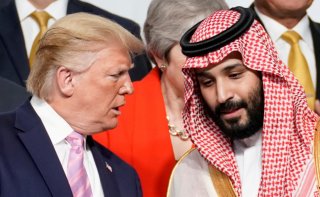 The 2020 presidential election features two candidates relying on nostalgia: Joe Biden, who draws on his experience with the Obama administration, and Donald Trump, for whom the days-of-yore “Make America Great Again” slogan has become a calling card. The jury’s still out on which strategic sentimentalist will triumph come November, but one thing is certain. The victor would be wise to leave a key part of U.S. foreign policy behind: our relationship with Saudi Arabia.

In 2015, the United States joined forces with Saudi Arabia as the kingdom fought its sworn enemies in Yemen. With Barack Obama at the helm, the United States sought to maintain Saudi favor and team up against Iran, a mutual foe. Thus began a relationship that has since given Saudi Arabia critical support in its military campaigns.

While the Obama administration routinely hailed Yemen as a conflict that was handled correctly, the U.S.-Saudi partnership led to war crimes committed by every party involved, “widespread and systematic” strikes on civilian targets (according to the UN) by our Saudi allies, and the absolute destruction of an already-destitute country.

The blame doesn’t start and end with Obama, though. In recent years, President Trump has created an unprecedented kinship between the United States and Saudi Arabia. Just months after taking office, Trump traveled to Saudi Arabia on his first foreign trip. The crown jewel of this journey was the arms deal signed by Trump and Saudi king Salman, totaling nearly $110 billion. This transactional diplomacy continued. Trump would later snub Congress and declare a national emergency to complete a sale of an additional $8 billion in weapons sales to the kingdom.

Those weapons have enabled unspeakable horrors. American arms have been used to strike homes, schools, and a bus full of children. To add insult to unfathomable injury, Saudi Arabia violated its arms agreements with the United States, selling American-made weapons to Houthi rebels and Al Qaeda fighters in an attempt to win local favor. President Trump was only too willing to look the other way, lest we “lose all of that investment being made into our country” by scrapping lucrative arms deals.

No matter who wins this November, our president-elect can choose to amend years of shameful collaboration with Saudi Arabia, a partnership that has so often been governed by willful ignorance and blind forgiveness. For Trump, it’s a chance to turn over a new leaf; for Biden, it’s an opportunity to blaze a new trail.

On the debate stage last year, Biden swore that he would suspend arms sales to Saudi Arabia once and for all. He opined that there was “very little social redeeming value in the present Saudi leadership,” which had been “murdering children” in Yemen. He’s not wrong—and this drawback is a cause that Democrats and Republicans alike can rally behind. Just last March, Congress passed legislation calling for an end to American involvement in Yemen, drawing together unlikely allies like conservative Republican Senator Mike Lee of Utah and self-described democratic socialist Senator Bernie Sanders.

That solidarity is no coincidence. It’s indicative of broader public sentiment toward the U.S.-Saudi relationship. According to a 2018 YouGov survey, 75 percent of Americans who had an opinion on the conflict in Yemen disapproved of U.S. involvement. Just 13 percent of those surveyed supported increased arms sales to Saudi Arabia. Trump may have vetoed Congress’ attempt to distance the U.S. from the Saudis, but by no means has opposition vanished.

It’s time that the United States puts an end, at long last, to the harm that it has helped Saudi Arabia propagate in Yemen. If it wasn’t already a morally straightforward decision, it’s at least a practically straightforward one. November’s winner can count on the support of Congress and the general public. Just as Biden could stray from the precedent set under Obama, Trump could choose to correct his own record on Saudi Arabia.

No matter the result of 2020’s election, the United States desperately needs to take a long-overdue look at its relationship with Saudi Arabia. Yemeni civilians continue to die at Saudi hands, and the United States has been tragically complicit for far too long.

Fiona Harrigan is an associate contributor for Young Voices and a political writer based in Tucson, Arizona. Find her on Twitter @Fiona_Harrigan.